Kanga Roo’ Kitten Was Born With A Disability, But This Couldn’t Stop Her From Hopping Into Everybody’s Hearts

Cats are some of the most interesting animals and they often defy gravity with their acrobatics. For example, have you ever seen a cat jump on top of the refrigerator? Having full use of their bodies is incredibly important to them, so when one cat was born with a disability her owners immediately wanted to put her down. However, you won’t believe how quickly her life turned around. 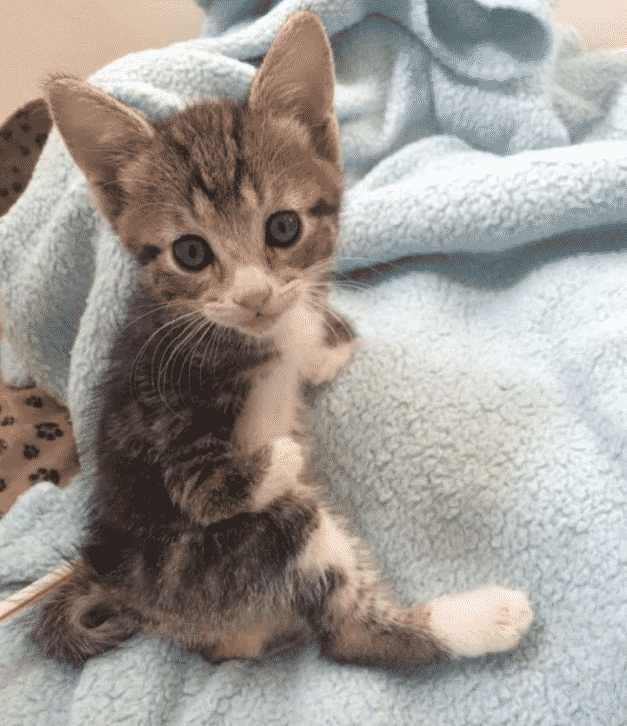 Meet Kanga, an adorable cat that was unfortunately born with a disability. Kanga’s front legs were deformed and this deformity would prevent her from growing normally. This also causes her to hop around, like a kangaroo, on her back legs because of how small her front legs are. 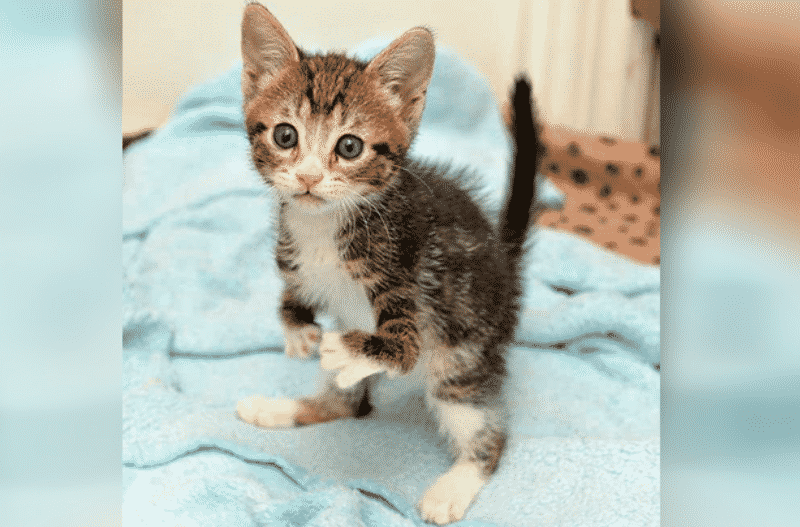 Although Kanga’s condition wasn’t fatal, her owners didn’t seem to want to deal with it. They brought the little kitten to the vet’s office to put her to sleep. However, her life took a dramatic turn for the better. 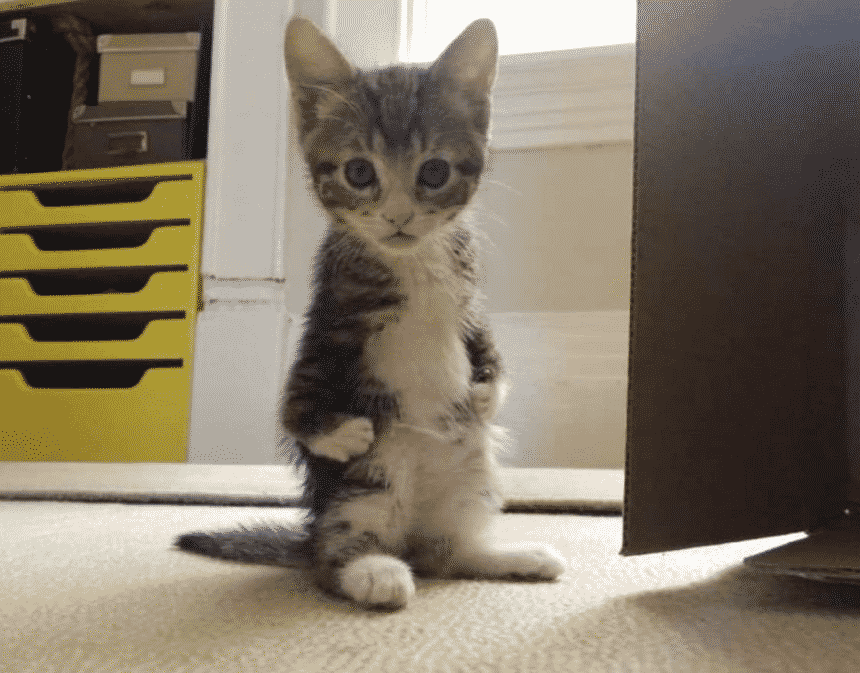 A woman named Cheryl saw Kanga and knew immediately that the cat deserved better. She knew it wasn’t right to put Kanga to sleep. Cheryl got to work to help save Kanga’s life. 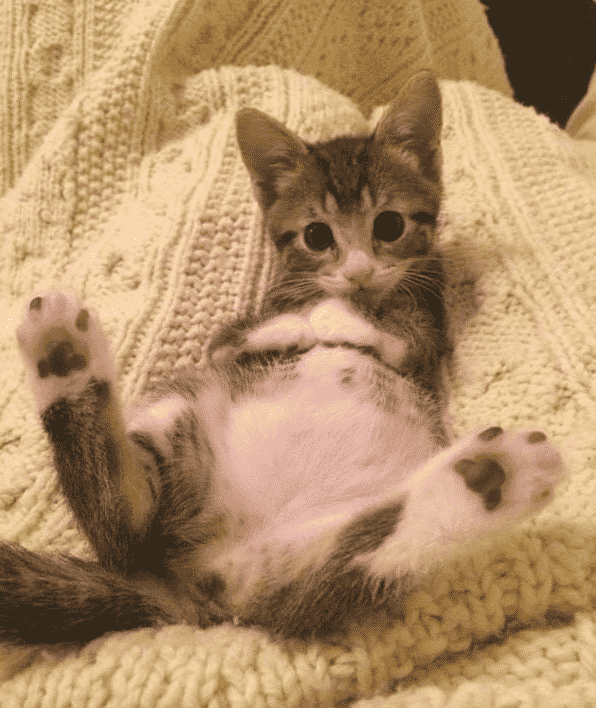 Cheryl got in contact with Saving Grace Rescue in San Francisco. She wrote to them begging them to help her save Kanga’s life. In no time, the rescue group responded! 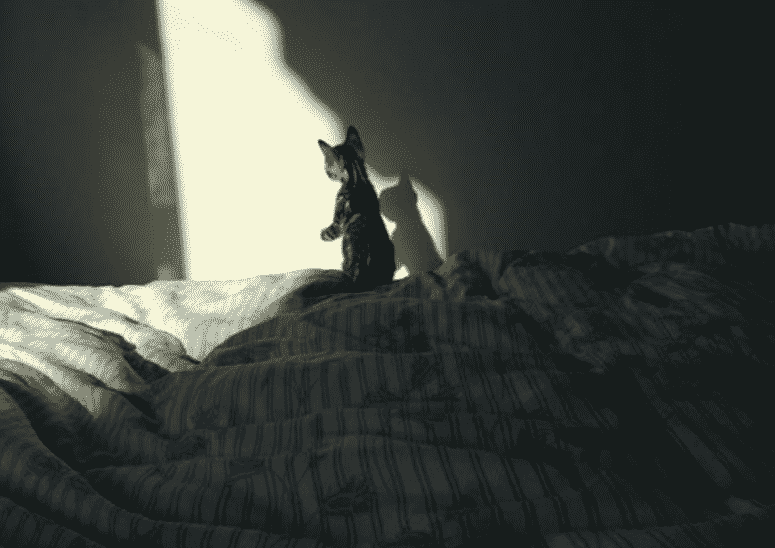 At the Saving Grace Rescue, the shelter workers began to help Kanga learn how to walk. Through daily training lessons, Kanga began to walk around without a problem. However, it wasn’t the usual way a cat would walk around. 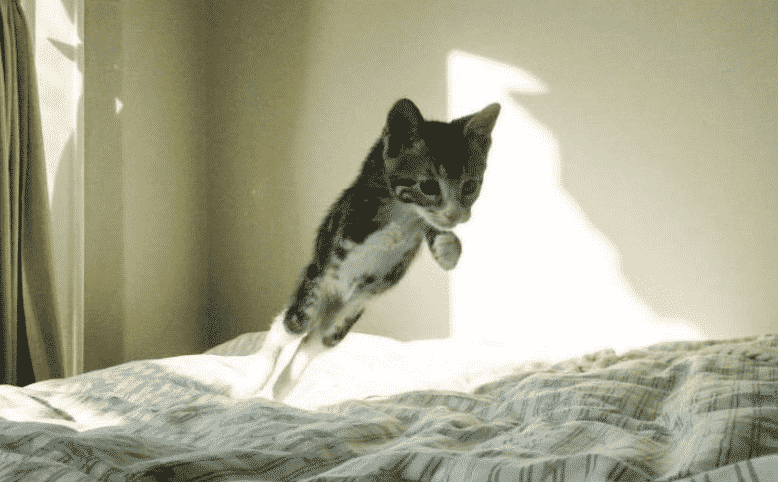 Soon Kanga was able to be mobile and move around, however, it wasn’t in the usual manner a cat would walk. Since Kanga’s front legs were small, she had to rely on her back legs for all of her movement. Kanga would hop around! 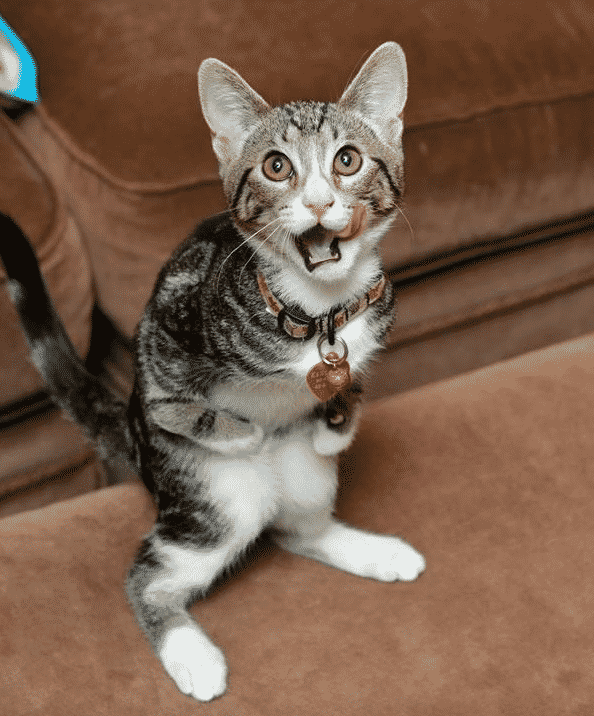 After learning how to move around, it was finally time for Kanga to be adopted by a family. The rescue center began to post about Kanga and let everyone know about her availability. That’s when someone finally inquired that was perfect! 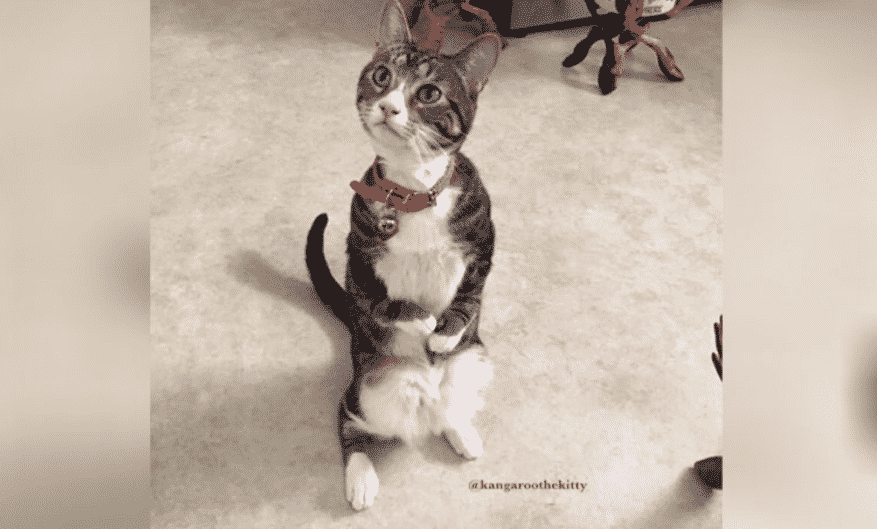 A woman named Joyce and her family came across some photos and videos of Kanga. They all immediately fell in love with the sweet kitten. They knew she would be a perfect addition to their family. 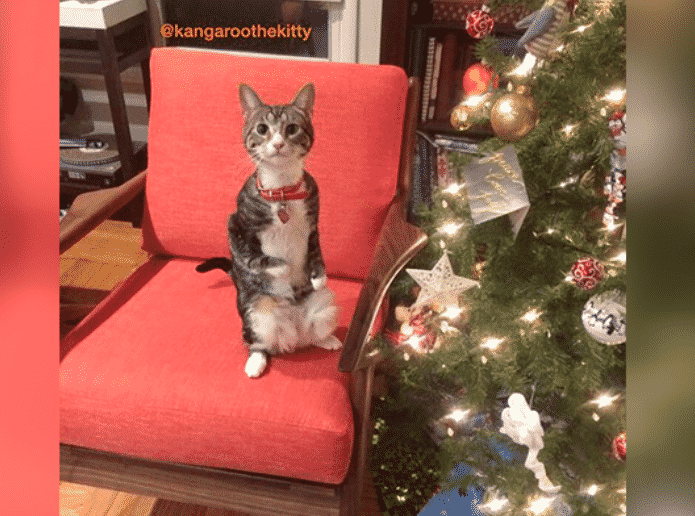 “We saw a video of her and fell in love. Because she was a petite girl, it took a few more weeks to reach 2 lbs, the weight necessary for spaying surgery,” Joyce said. Once Kanga reached the perfect weight, Joyce was able to take her home. 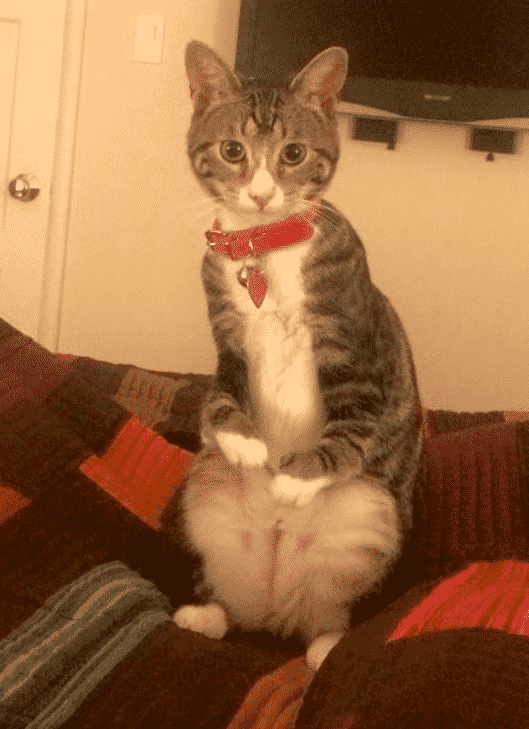 As soon as Kanga was brought into her new home she was intent on exploring. Kanga set around the house on her back legs and hopped around in exploration. It was the sweetest thing any of them had ever seen. 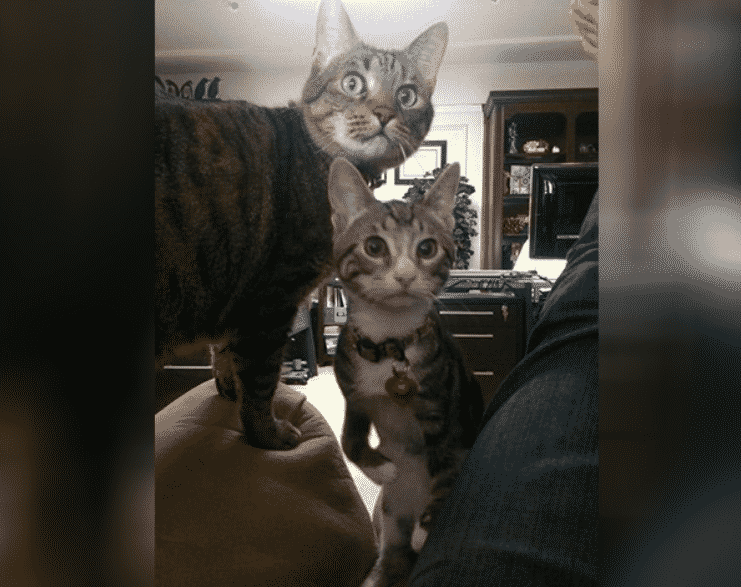 It didn’t take long for Kanga Roo to fit in with her new surroundings. Joyce and her family already had another cat named Skittles, a tabby cat. Did the two of them manage to get along?! 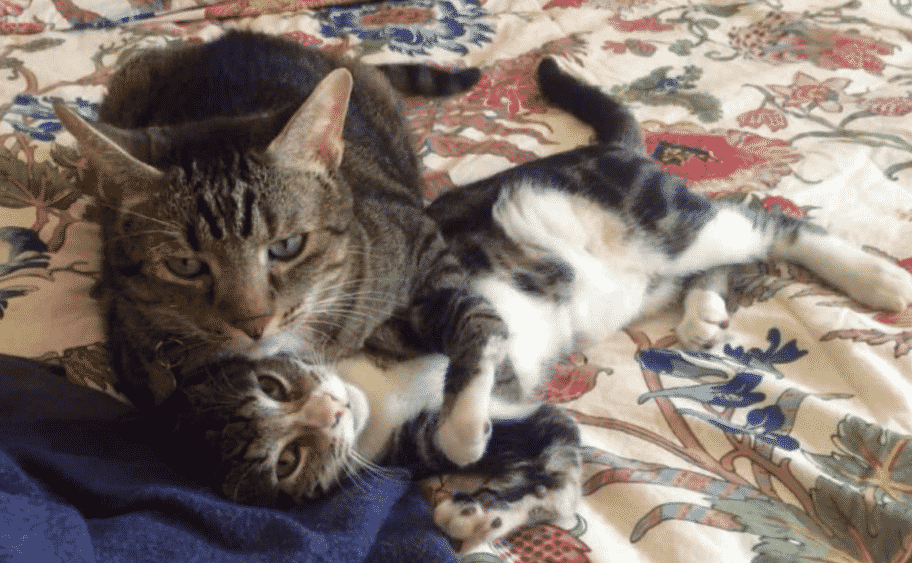 So, how did Skittles and Kanga react to one another? Well, Skittles immediately took charge as the older sibling and began to watch over Kanga. It was a perfect relationship! 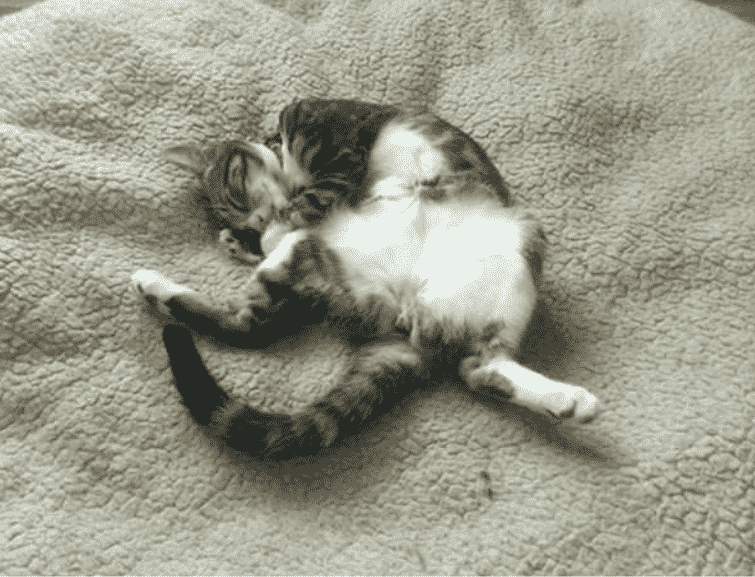 Now, it’s been three years since Joyce and her family adopted Kanga. In all of that time, Kanga has been doing great and loves her home! Since her time with Kanga has been so great, Joyce decided to start fostering more cats. 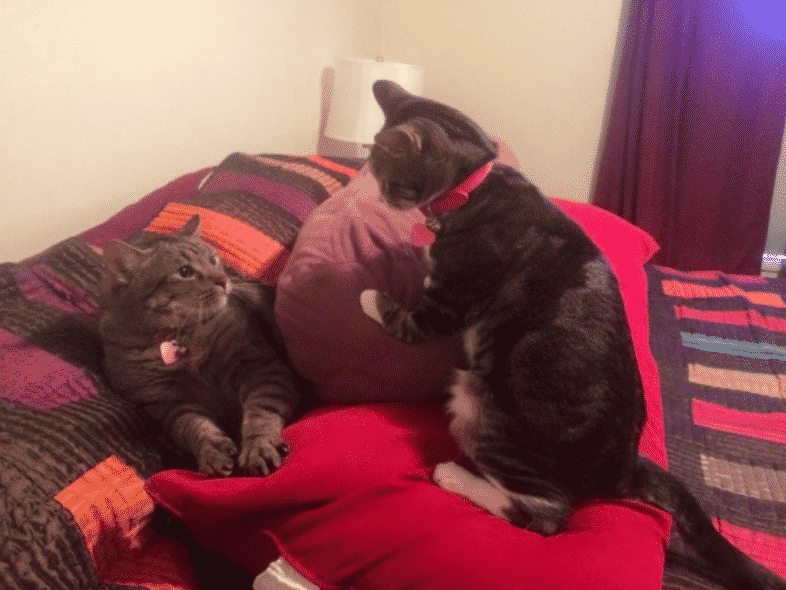 With so many new kittens in the house, Kanga decided that she wanted to help out as well. She began to take on the role of mommy to many of the foster kittens. Her disability didn’t stop her in any way! 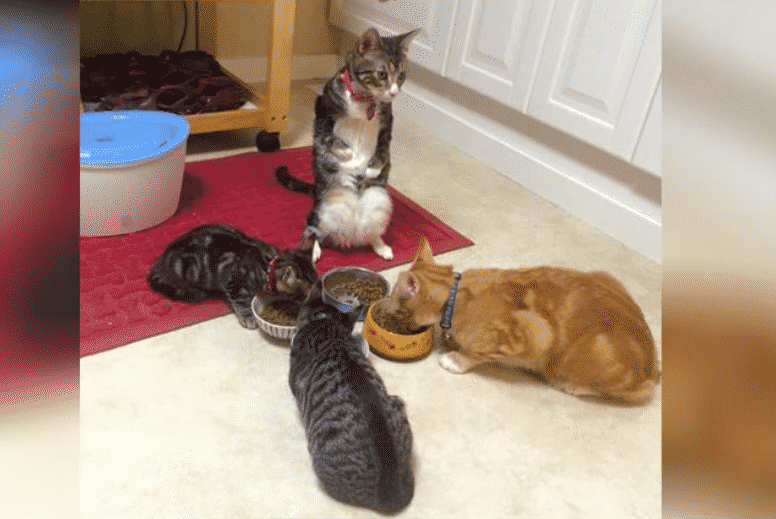 “Kanga Roo, the protector, was in full mama mode,” Joyce said of this photo. “The babies were eating and she heard a noise, so she looked up to see what was up.” Then one day, Kanga was introduced to a cat who had a similar problem to her. 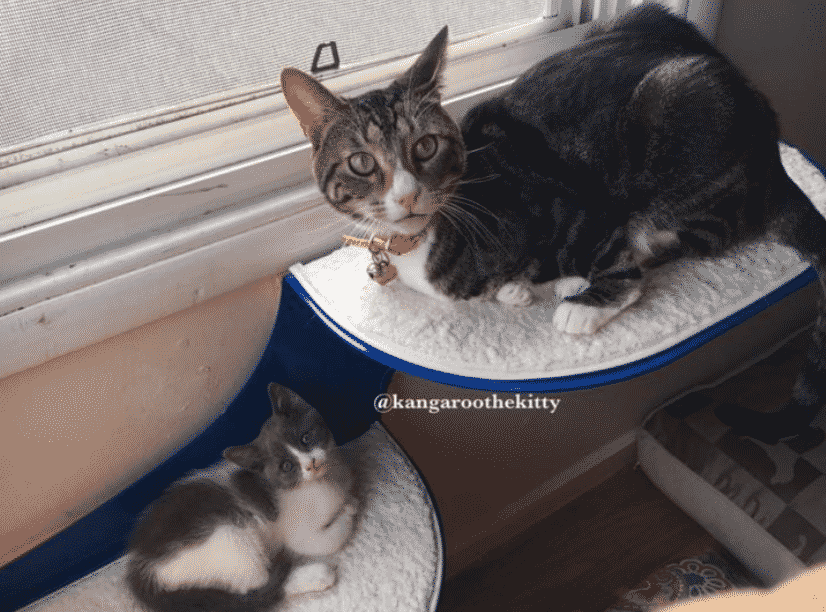 Alealani was brought to Joyce’s house as a small kitten. She was born with the same disability as Kanga. Kanga quickly took on the role as mentor to Alealani and began to teach her how to move around on her hind legs. 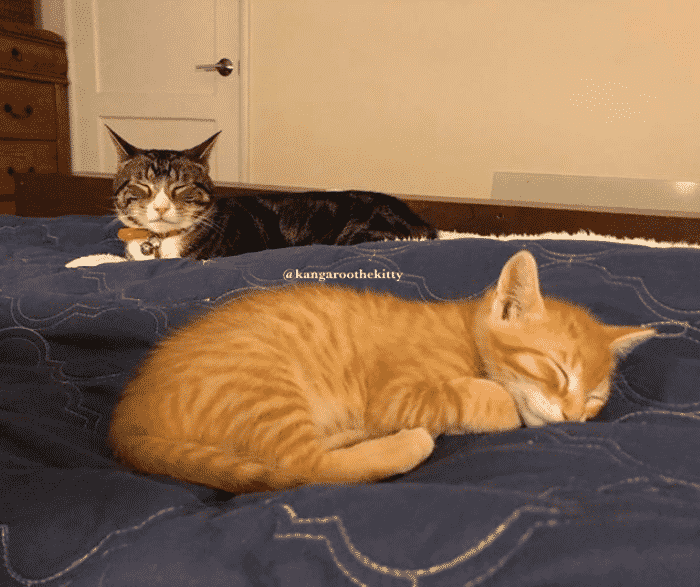 Alealani looks up to Kanga Roo for guidance and is always following her around. It is obvious that Kanga Roo has made quite an impact on the small and growing kitten. Alealani even copies everything that Kanga Roo does. 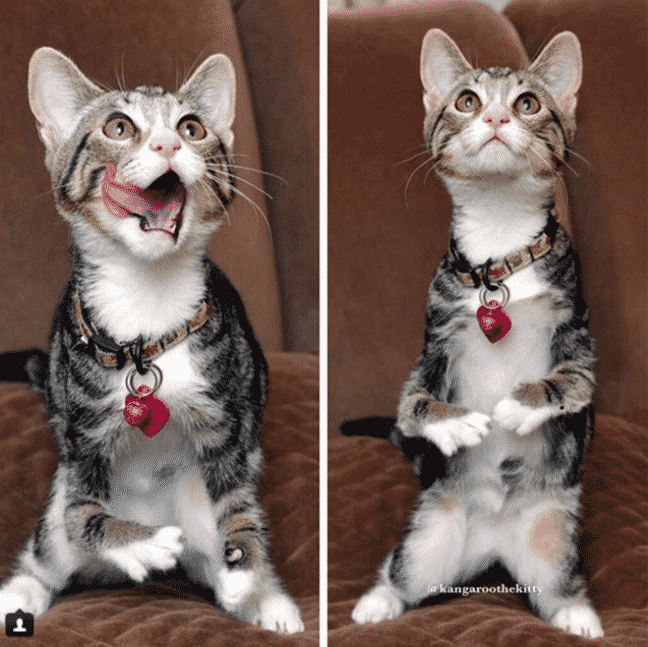 Despite their disability, both Kanga Roo and Alealani have been living their best lives without anyone to stop them! Even though their mobility may be limited, it hasn’t stopped these two cats from expressing all of their talents.

Kanga Roo has truly worked against the odds in so many ways. Throughout it all, she has managed to prevail and prove what an extraordinary cat she truly is. 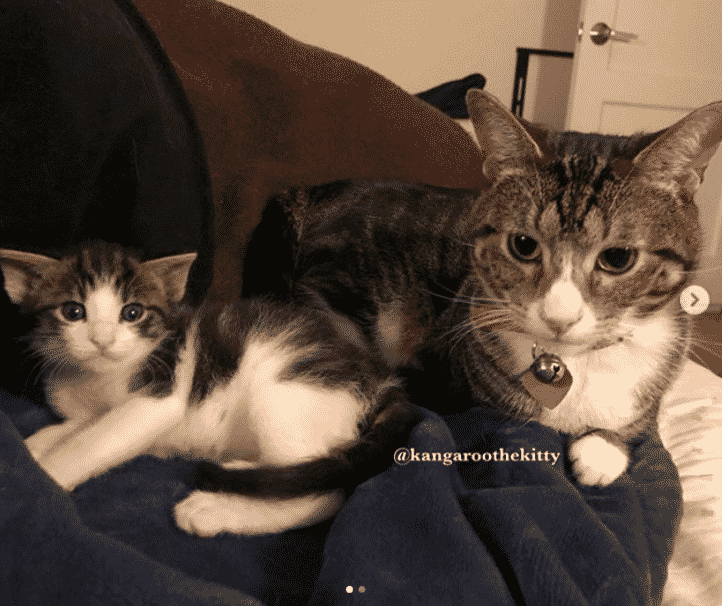 Thanks to one amazing person’s dedication, Kanga Roo was given a second chance at life. Now, Kanga is all grown up and helping out other cats in need!