Elephant Spends 11 Hours Digging A Hole, Then Pulls Out Something Unexpected

Elephants are some of the world’s most intelligent creatures. They possess excellent problem-solving skills and are extremely compassionate. So when one elephant in India found herself in a stressful situation and began digging a hole for hours. No one could understand why until she pulled out the most unexpected thing! 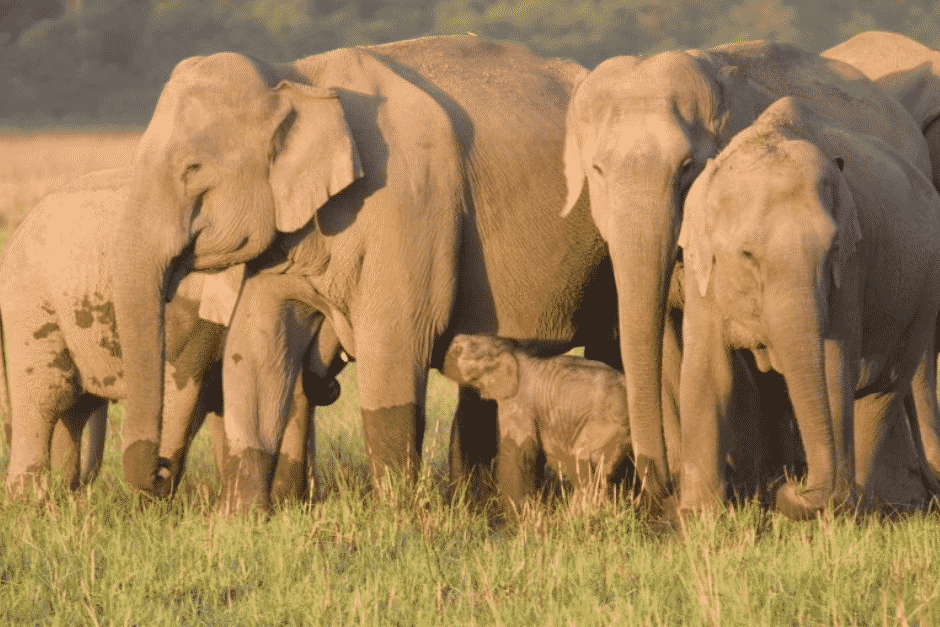 Back in 2015, a herd of 60 elephants were spotted taking a walk through northeastern India. The herd had been traveling for miles and they seemed to be tired. Then something horribly unexpected occurred… 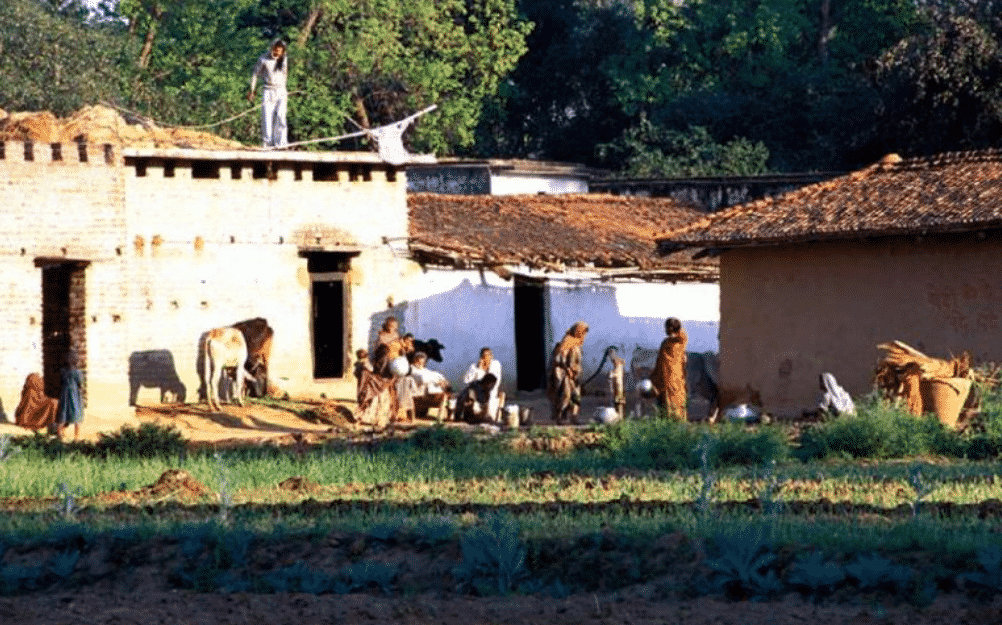 Many of the villagers of the Chatra district were pretty used to seeing elephants passing through the village. It wasn’t an unusual sight to see the elephants migrating through. However, there was one elephant that immediately stood out from the group. 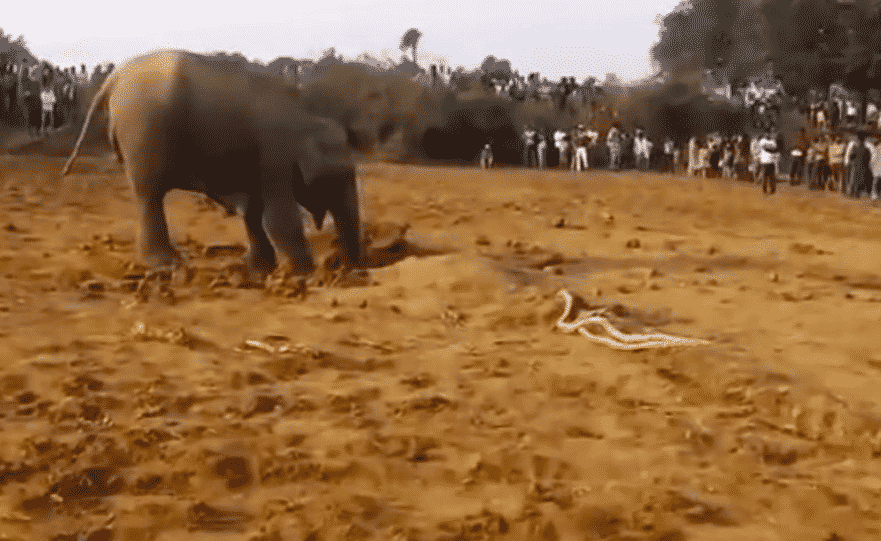 So why did this one elephant stand out so much? Well, she was behaving in the most erratic ways. Hour after hour she would circle around a muddy area of a field and wouldn’t settle down. The villagers couldn’t understand why. 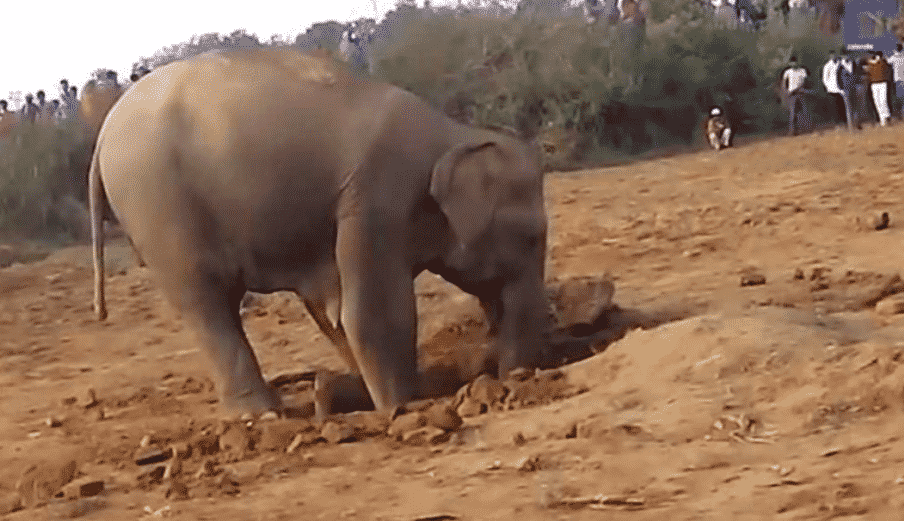 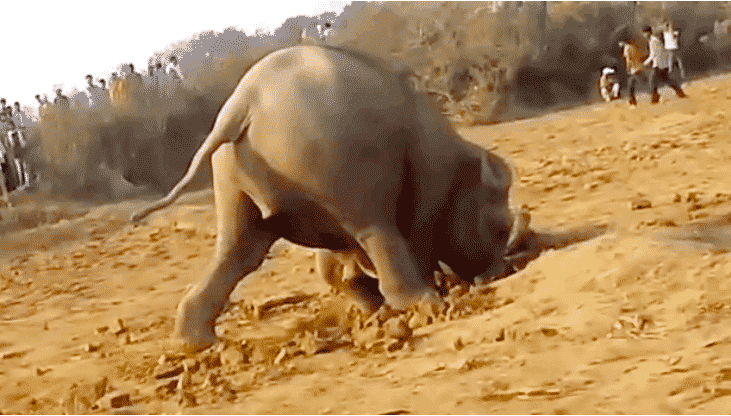 It soon became apparent to the villagers that the elephant was digging for something under the ground. She was using her trunk as a shovel as she began create a ditch. It didn’t seem like she was going to stop anytime soon. 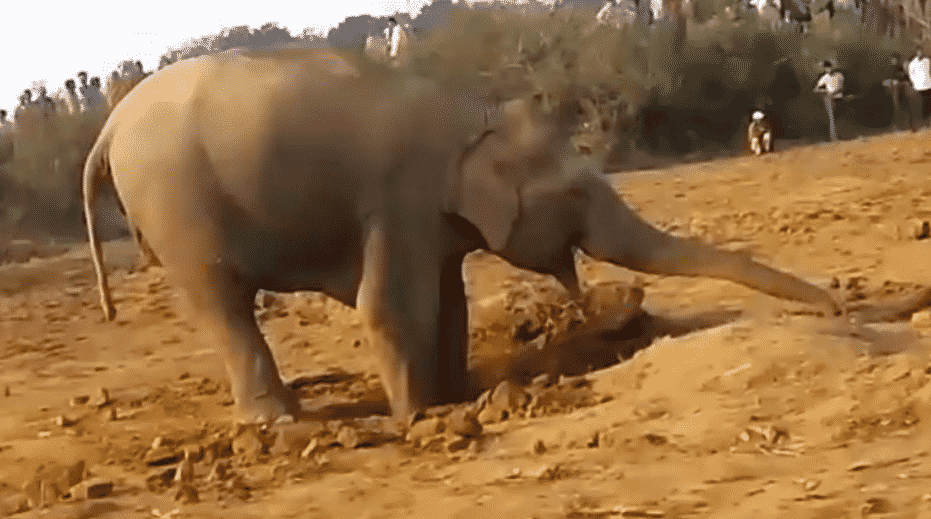 Every once in a while she would step back, obviously from exhaustion. The poor elephant continued digging for the next 11 hours! No one could understand what she was doing or why… 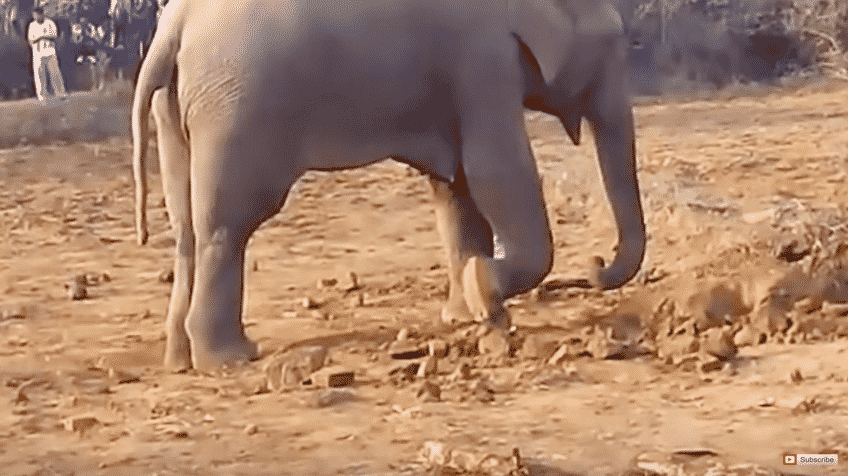 The elephant had been digging for so long that at this point most of the herd had gone on without her. From sunrise into sunset she dug and dug. The villagers were worried that she could be dangerous. 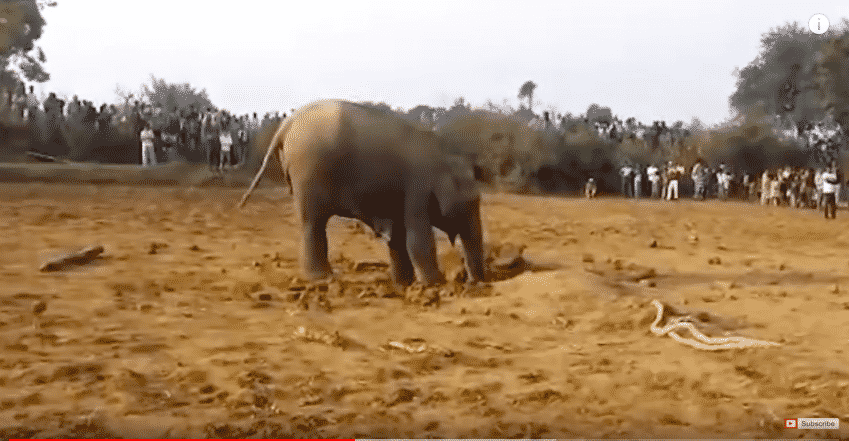 Eventually, after so many hours had gone by, the villagers knew they had to try and intervene. They began to proceed with caution, just in case the elephant was frantic. Then, as they got closer, they understood what was happening and it was shocking… 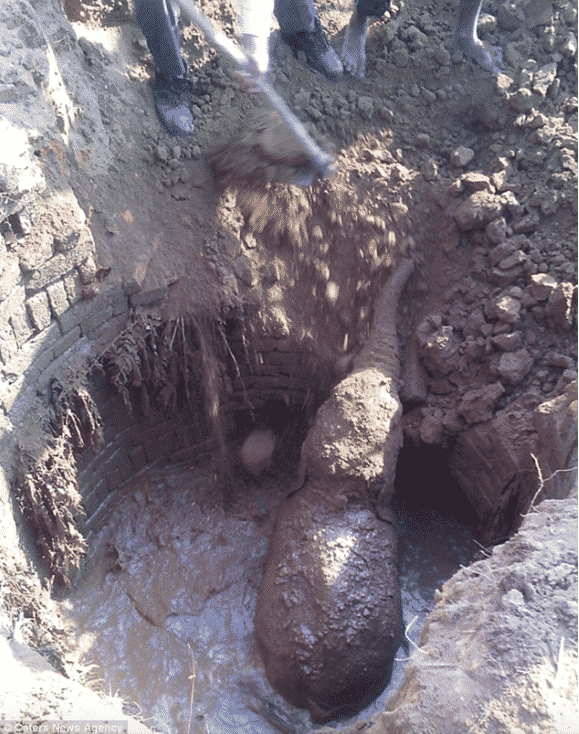 Finally, it was obvious to the villagers why the elephant had been digging for so long. Inside of the ditch that she had dug up was her baby calf. It seems that her baby calf had fallen in and couldn’t get out. 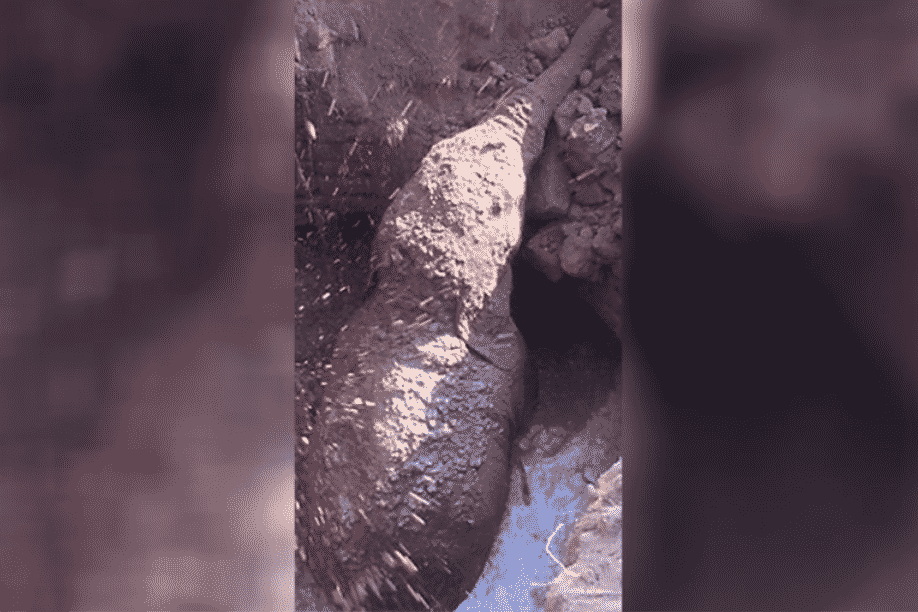 Unfortunately, without knowing it, the mama elephant was actually making the situation a lot worse. The more she dug the more the baby was pushed back into the muddy hole. The villagers knew that if they didn’t intervene that the baby elephant would eventually suffocate and not make it. 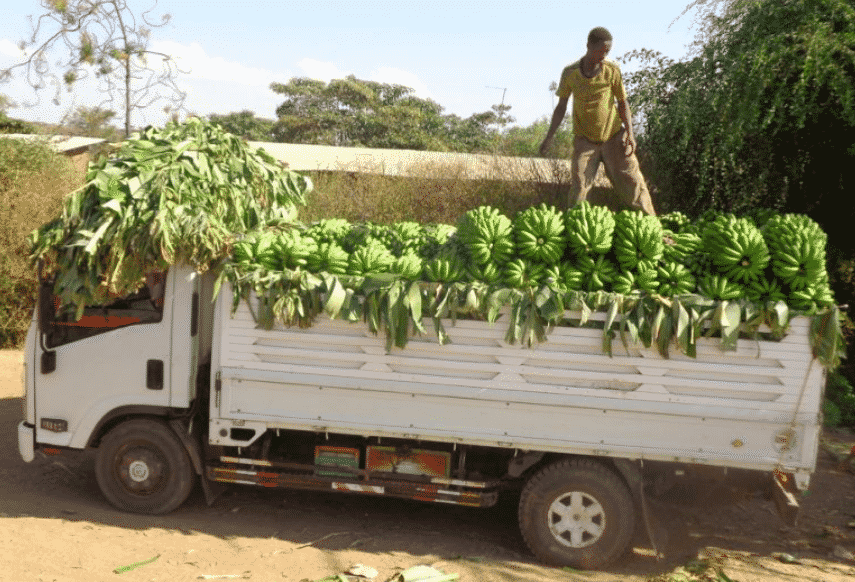 The villagers knew that it wouldn’t be an easy task to get the baby elephant out. So they decided to get creative with ideas while one villager, Jitendra Tiwari, began to film the rescue. The first thing they did was drive a banana truck through to scare away the mama elephant. 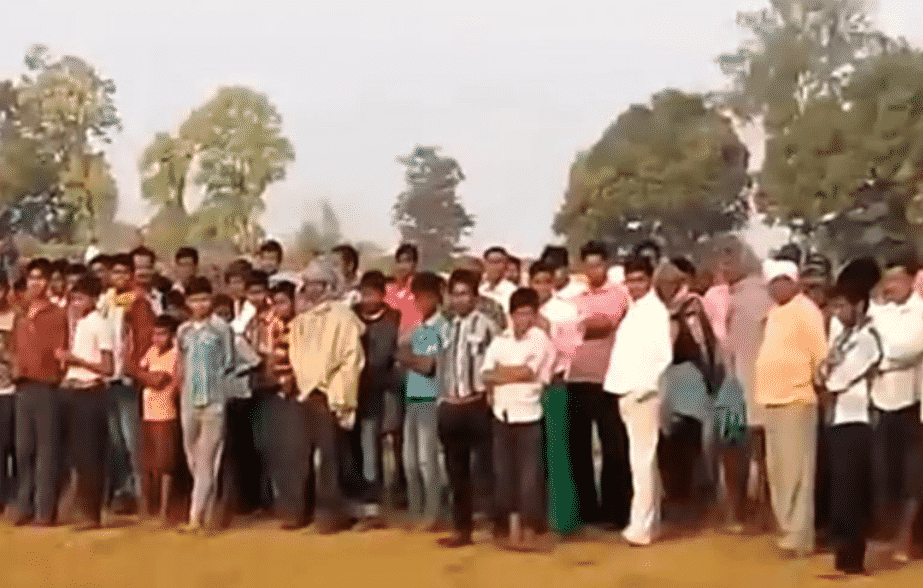 “With the mother elephant at a safe distance away,” Jitendra said, “We used [that] time to remove the heap of sand deposited near the well that was making it difficult for her to rescue the baby.” So would the plan work? 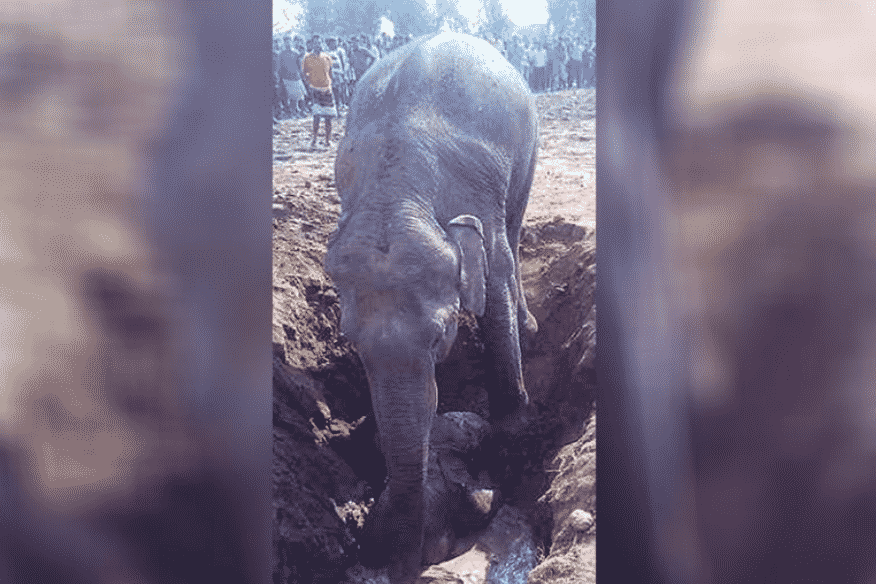 Once they had cleared a way, the villagers moved the banana truck so that the mother elephant could return. They hoped that now she would have enough space to grab the baby and bring her calf out. They wanted to avoid having her throw any more mud into the hole. 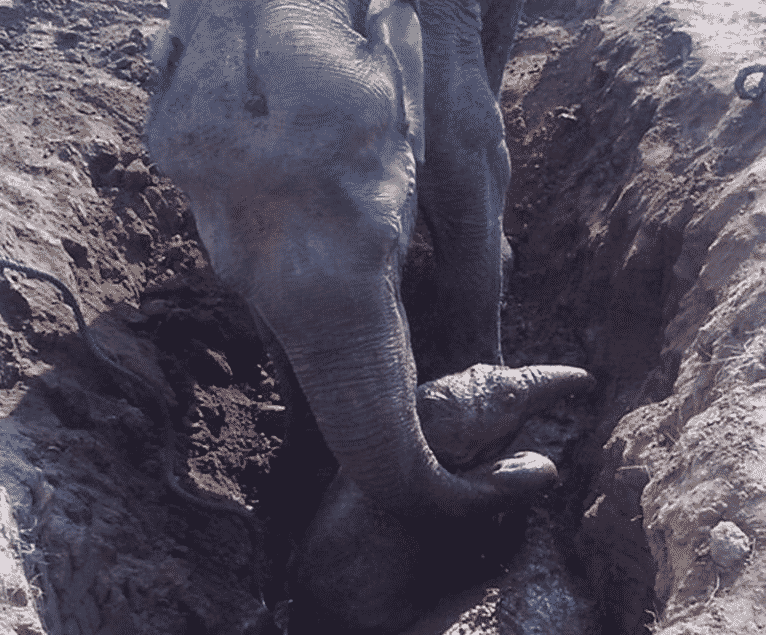 Finally, after digging for 11 hours, this mama elephant was able to pull her baby up out of the ground. She wrapped her trunk around the calf’s body and began to pull it out. After a few tugs she finally had her baby back by her side. 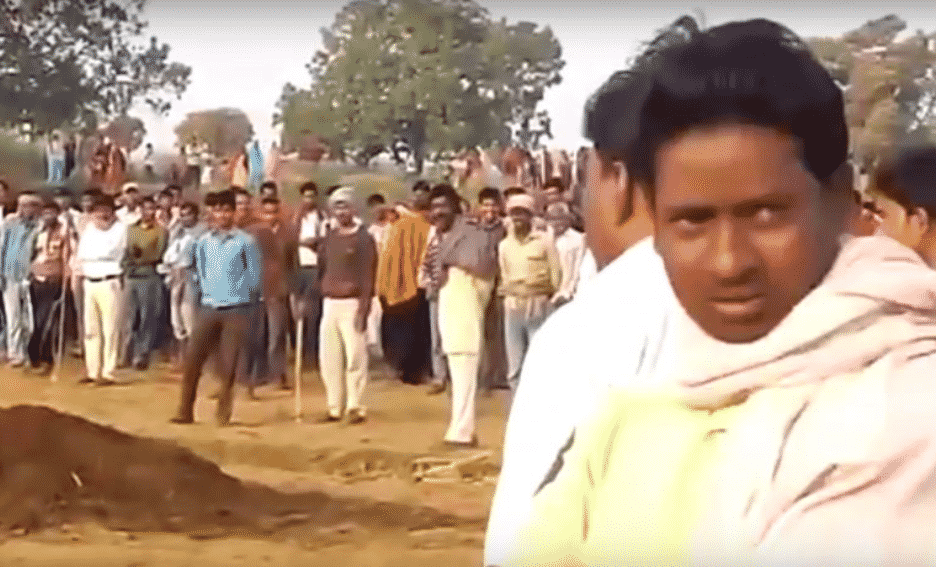 All of the villagers were so happy when the mama elephant had successfully pulled the baby out of the muddy ditch. After all of their hard work the baby would finally be returned back to its mother. The villagers also noticed something else very sweet…

Finally, the mama elephant could rest easy knowing that her baby was by her side and safe. The villagers watched as the two of them took their time walking away. Then they noticed the sweetest thing in the world! 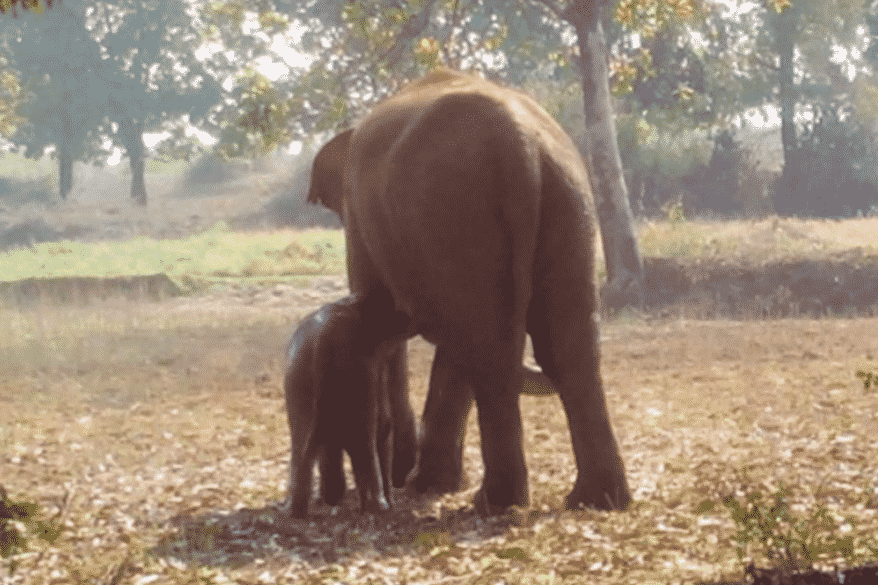 As the mama and the calf walked away into the sunset, the villagers noticed the most heartwarming gesture. The mama and the baby were walking away with their trunks intertwined the entire time. It was almost too sweet to be real! 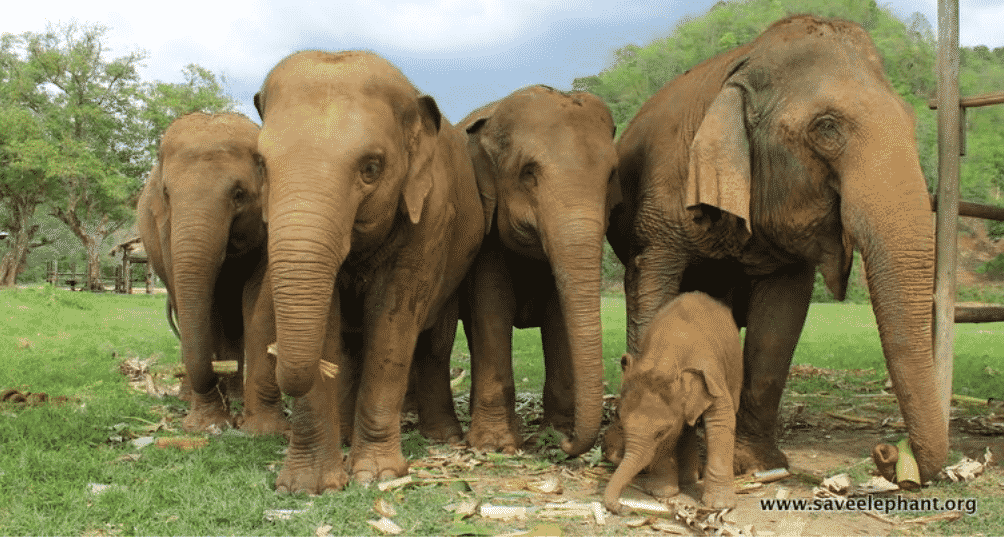 So the mama and the baby elephant began to walk away from the villagers. They were walking back to their herd, hoping to catch back up with their other family members and friends. Finally, this horrible ordeal was behind them. 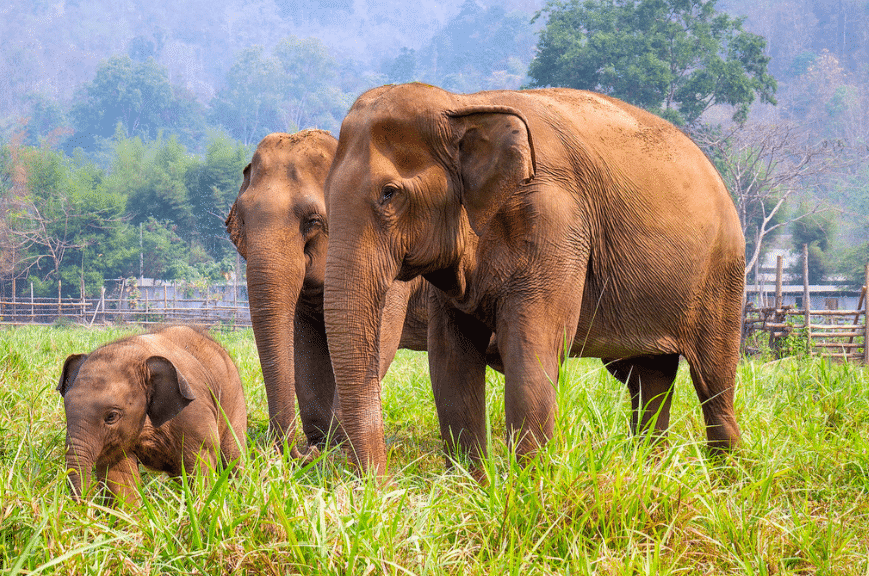 This situation just goes to show the perseverance that a mother has when it comes to the life of her child. This mama elephant refused to give up on her baby, no matter how hopeless the situation seemed. 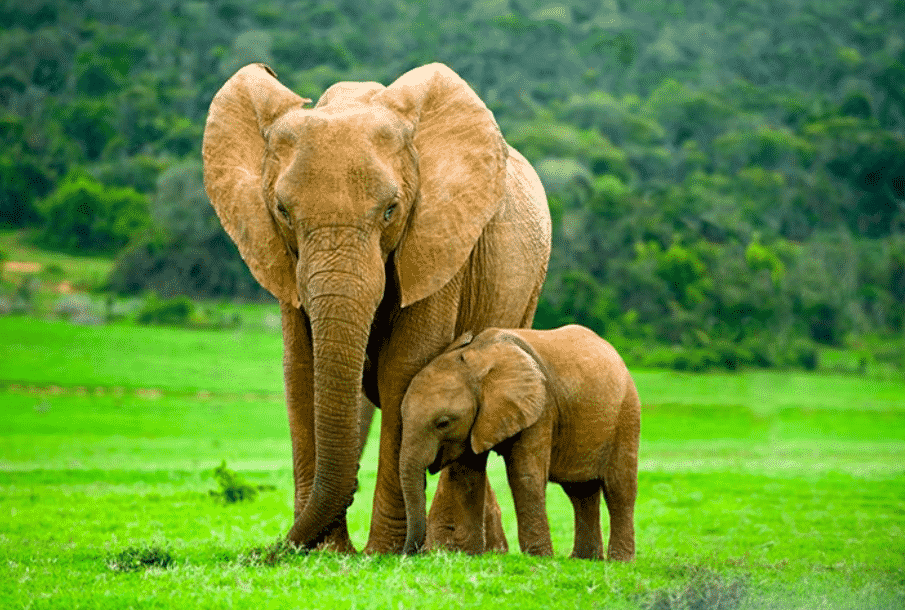 Thanks to both the wonderful villagers and the tenacious mama elephant, this baby elephant got a wonderful second chance at life. Now the mama and baby have been reunited and will continue on their migration journey.