Looking at the mountains in Taiwan you can see a beautiful landscape, but hiking them is quite a challenge, even for the skilled adventurers. However, for people that have never done this, it can be very dangerous. But when it came to saving an abandoned dog, Seán McCormack didn’t care about the long journey he had to make to help get the pup.

Thankfully, his friend Ross Tweedie knew more about hiking and accompanied him on the steep mountain. They documented their 12-hour long journey, and it’s quite an adventure! 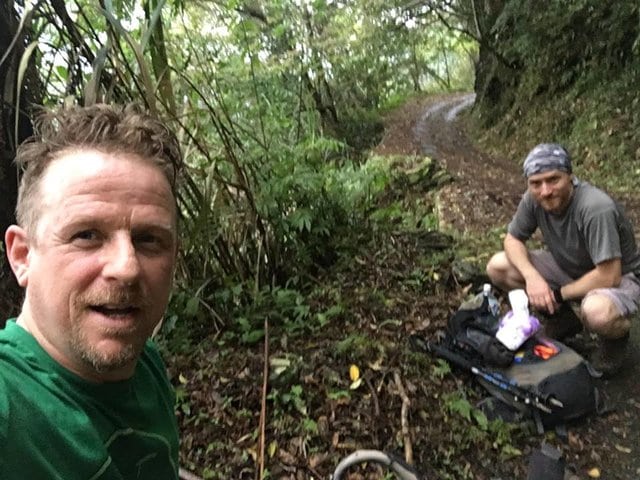 Sean McCormack is the founder of Animals Taiwan, a rescue organization that is based in Taipei. He has devoted his life to saving and helping animals in need. And whenever he is called about a case, he always tries his best to help.

19. There’s a Dog Up in the Mountains 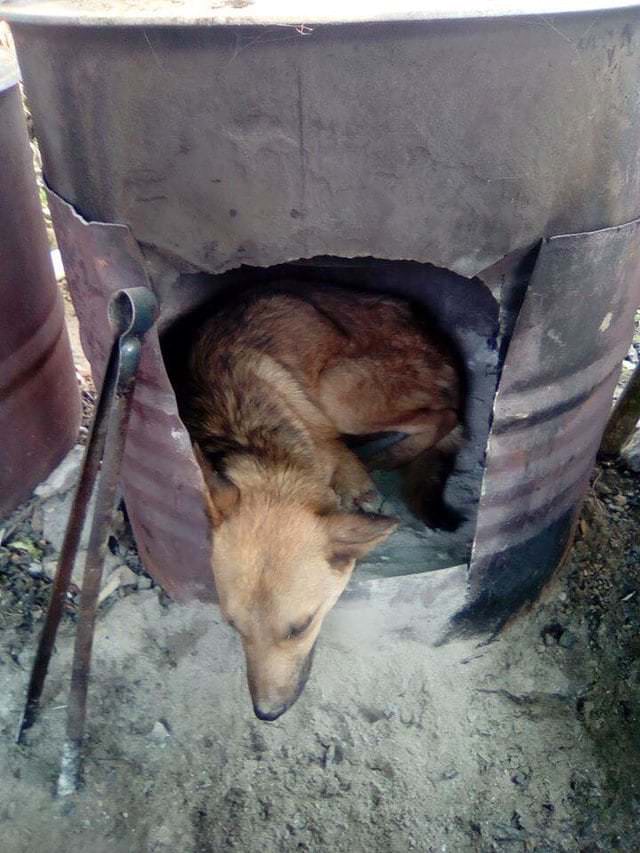 One day, on his Facebook page, he received a photo from a woman. It showed a dog curled up in an unused metal kiln. He got in touch with that woman and she said that she saw the dog outside a guest house in Taroko National Park…

18. The Pup Had Severe Injuries 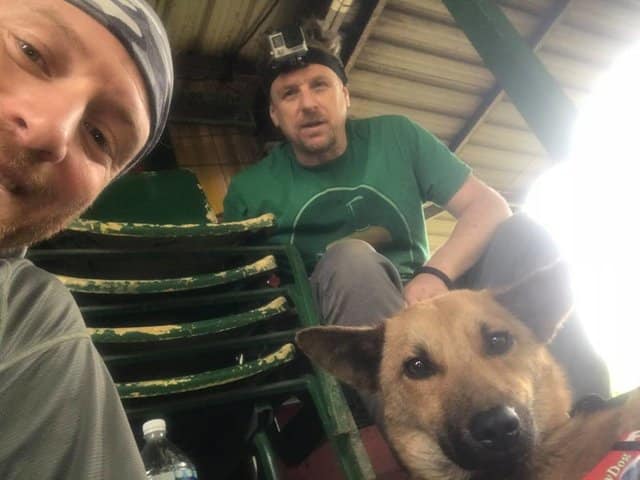 The poor pup was injured and the woman saw that its front right paw was missing and the bone was sticking out. The other front leg was very injured too, all was probably done by snares. This is what McCormack said in an interview.

17. Taps and Snares in Taiwan 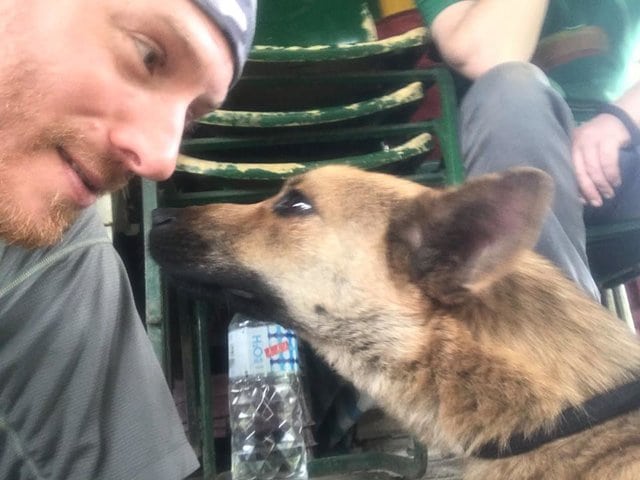 ‘There’s a big problem in Taiwan with traps and snares. Most of our rescues are dogs who have been maimed by one of these devices,’ explained McCormack. He told the woman that he’d go rescue the pup. But then, this happened… 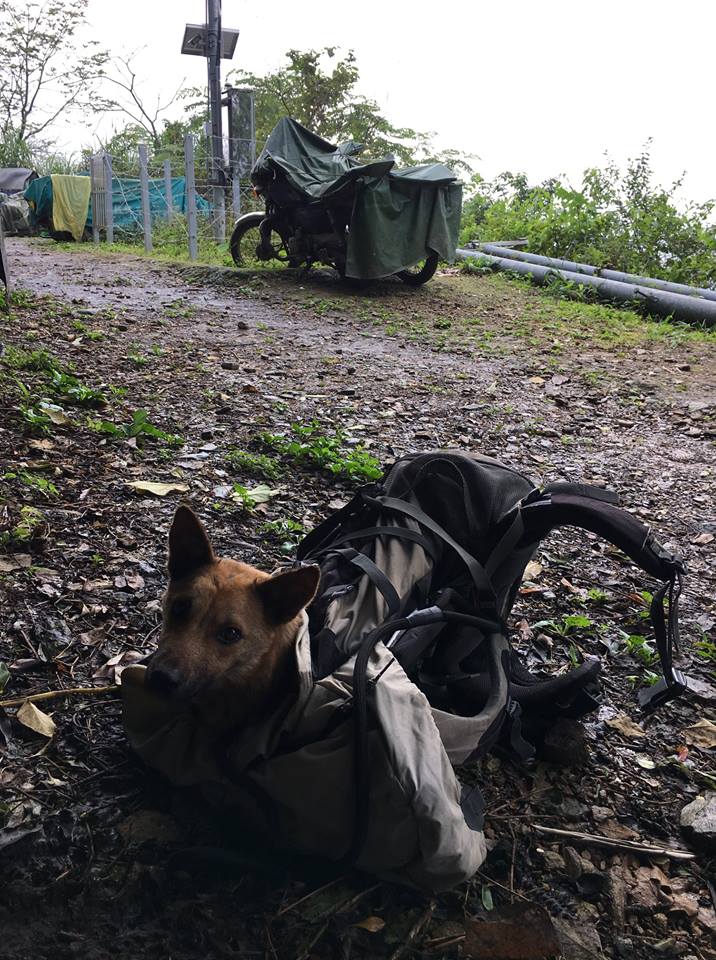 Initially, McCormack believed that the rescue mission would end fast, with him driving to the guest house. He said: ‘The lady said, ‘It’s a six-hour hike,’ and I thought, ‘There must be a back road. There must be because there’s a guest house there.’ But there wasn’t! 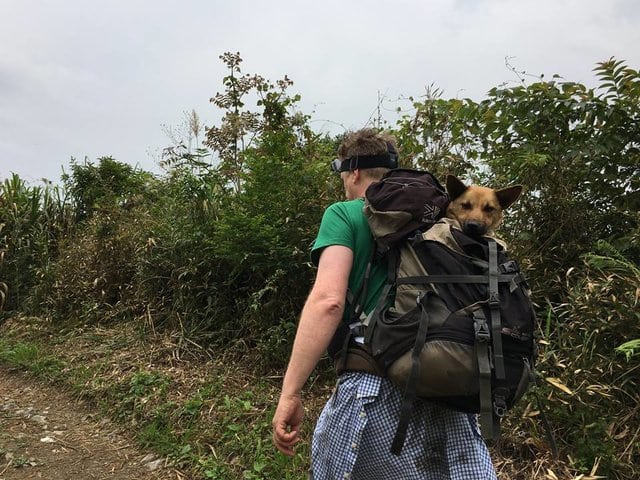 Even though McCormack saw on Google Maps a way to drive there, it really wasn’t other way than hiking. And the trail was long, steep and slippery. So he called his friend Tweedie, who is the co-owner of Taiwan Adventures, a trekking company.

14. The Perfect Man for The Job 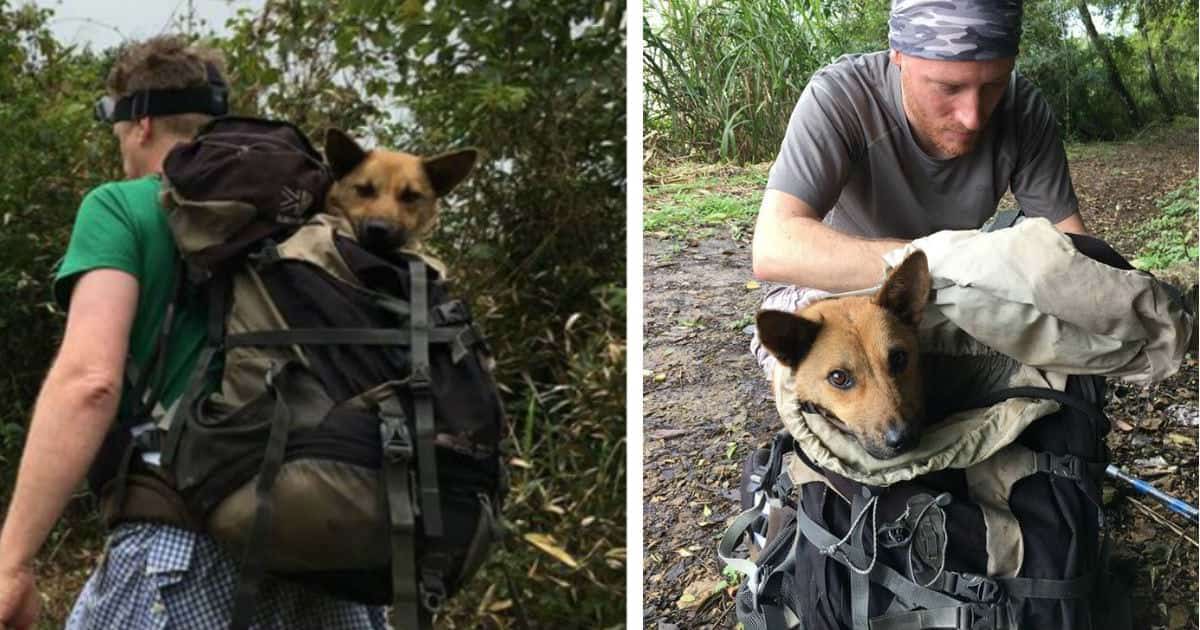 Tweedie was eager to accept, and he was the perfect man for the challenging road. However, he knew that the trail would be tough. He said that ‘it’s a brutal hike. It’s not one for beginners, and Sean was in the beginner category.’

13. Up for the Challenge 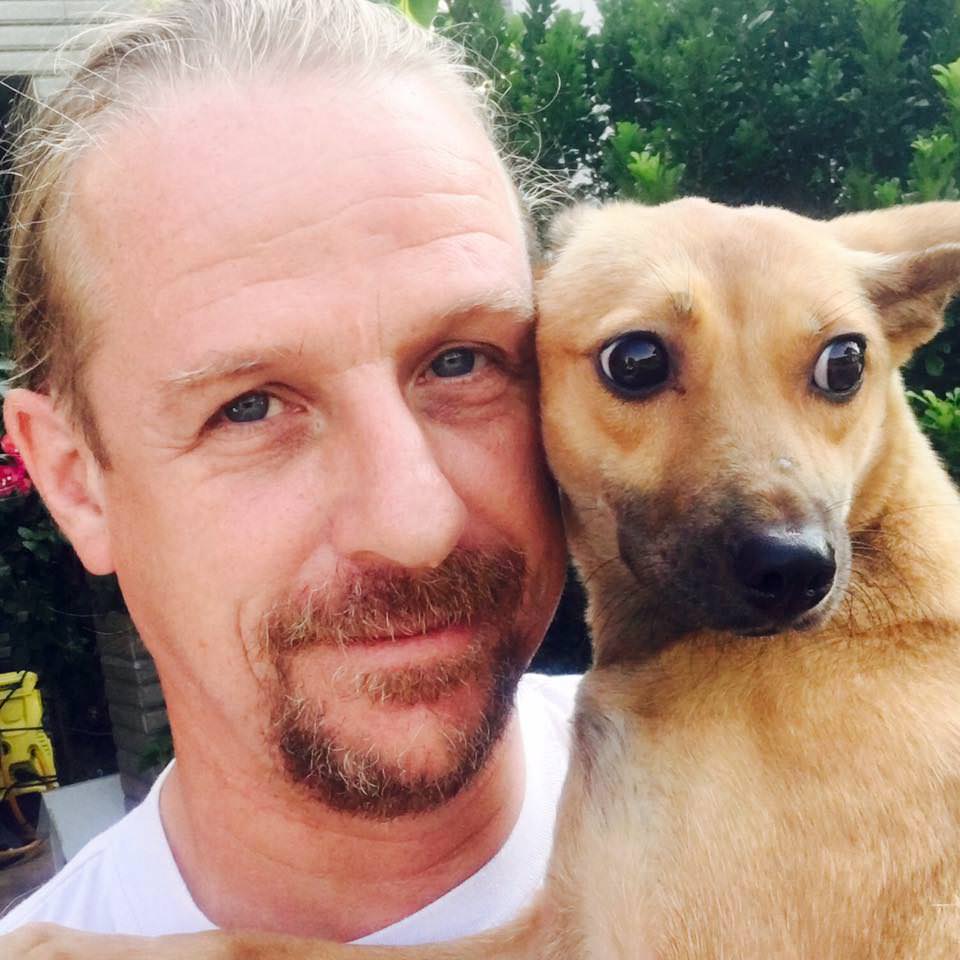 ‘He told me that he hadn’t done anything like that before,’ added Tweedie in an interview. And despite the challenge, the men started their journey at the end of this year’s March. Following the trail, McCormack was stunned to see how steep the hike was.

12. They Almost Turned Back 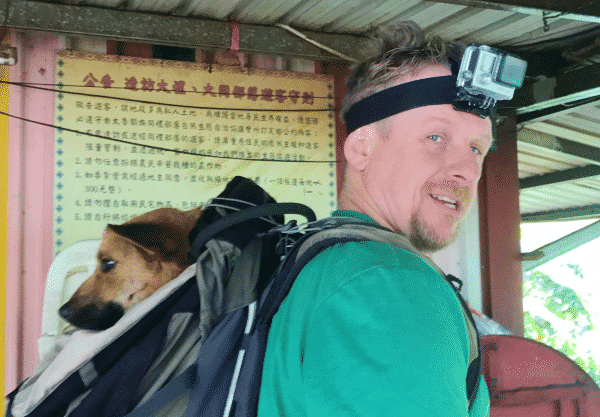 The man nearly gave up a few times, and even Tweedie started to wonder what if the dog was someone’s pet and they’d become upset if they came to get the dog. But after six hours of hike, they reached the house and found a new problem… 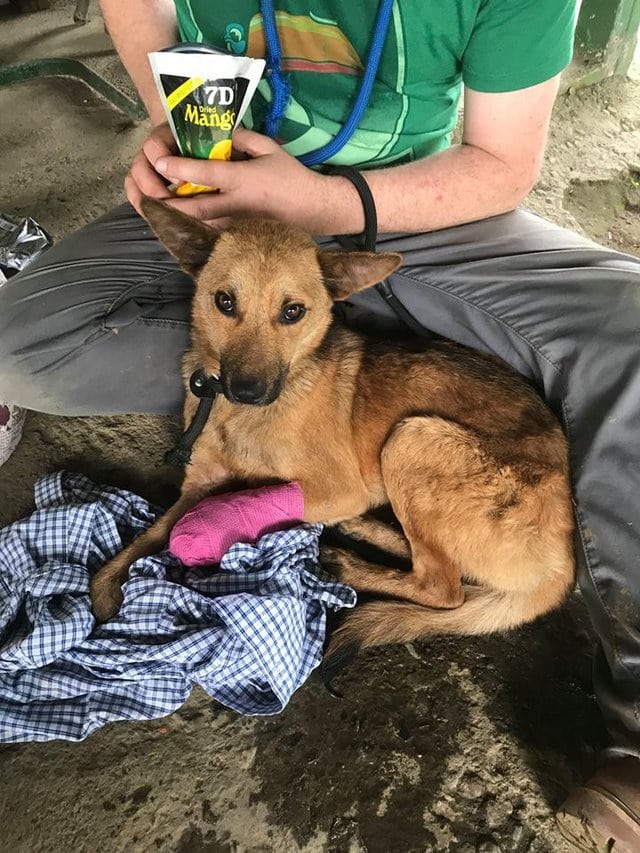 The dog was nowhere to be found! ‘We looked in the outside kitchen area, but the dog wasn’t there,’ said McCormack. After so many hours of hiking, they looked in each other’s eyes and didn’t say a thing ‘but I know we were both thinking, ‘Oh crap,’’ added McCormack. 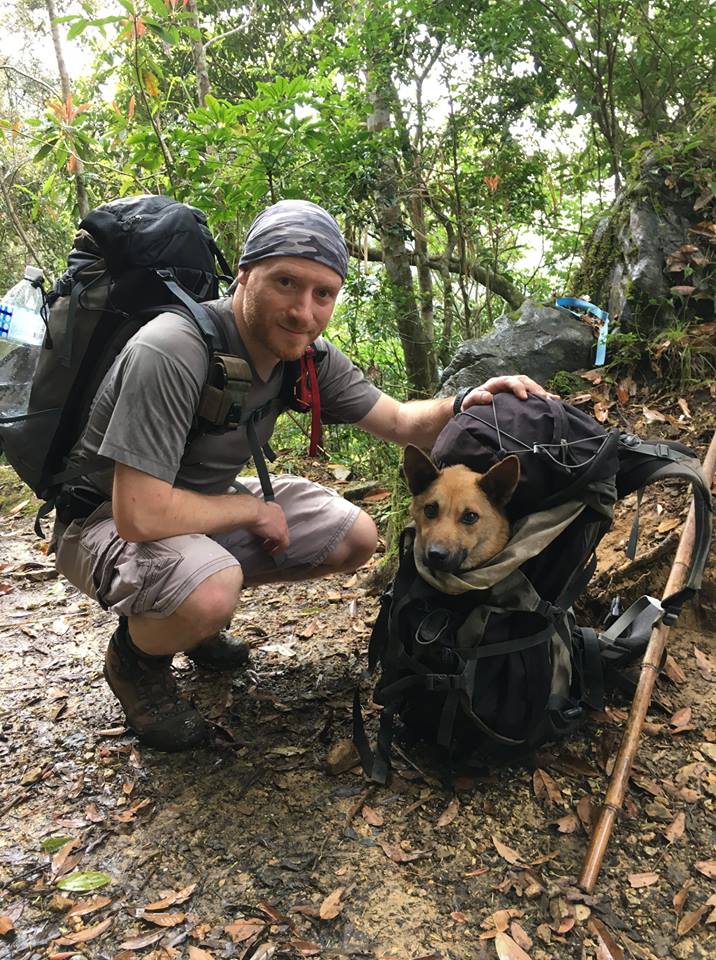 Then, McCormack saw something move under some plastic chairs: ‘This little dog was under there, wagging his whole back end.’ Finding them brought back the men’s hope that they were doing the right thing. His words made us shed a few tears! 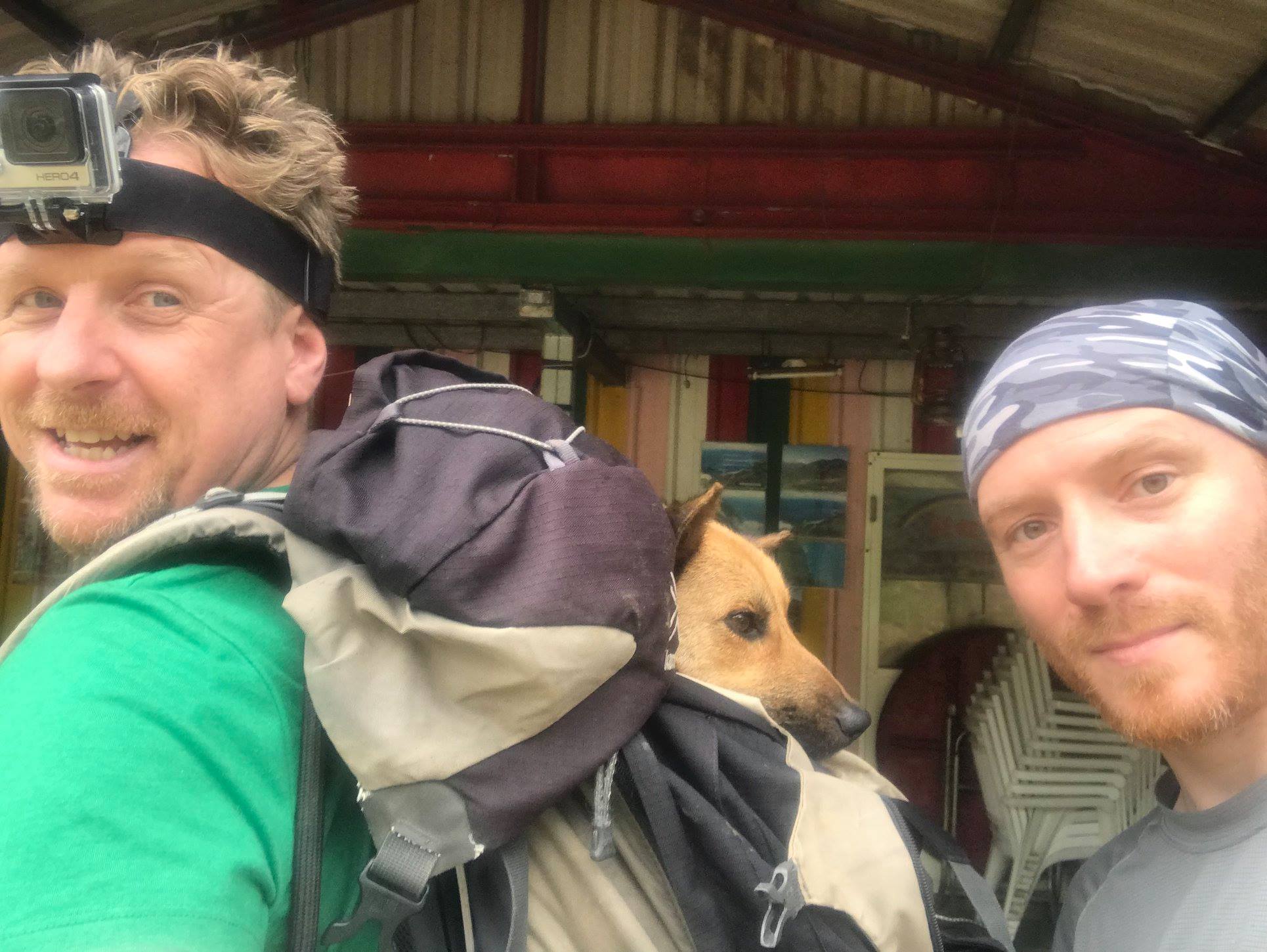 ‘Once we saw him, we both just changed our attitudes again — I suddenly had a lot of energy, and Ross was going to get that dog out no matter who complained about it,’ said McCormack. And to top that up, the pooch came close and made this heart-melting gesture! 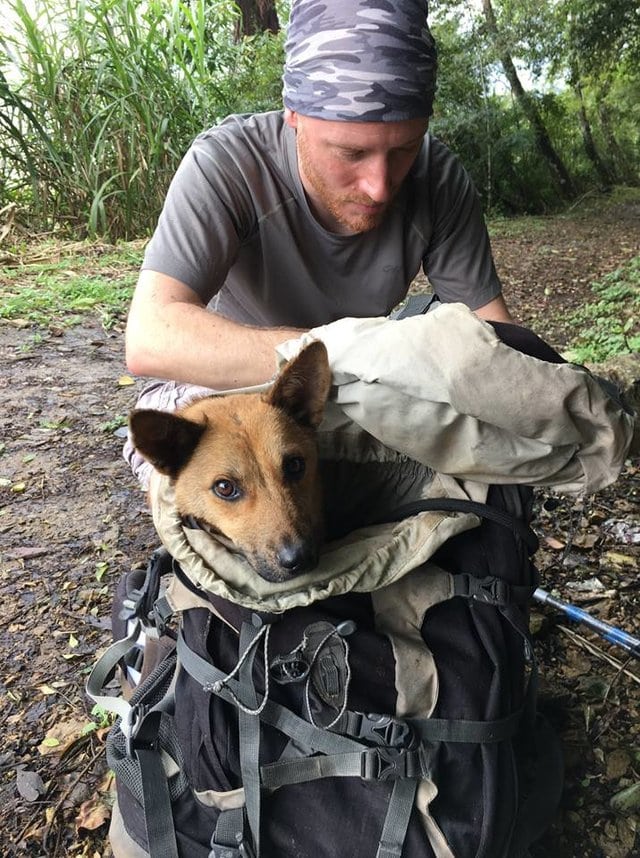 McCormack said that the dog ‘came and put his head on my lap, and he was just looking like he wanted a hug.’ The pup got his fair share of hugs, and he received a name: Sandy. He was not looking too good…

7. The Injuries Were Gut-Wrenching 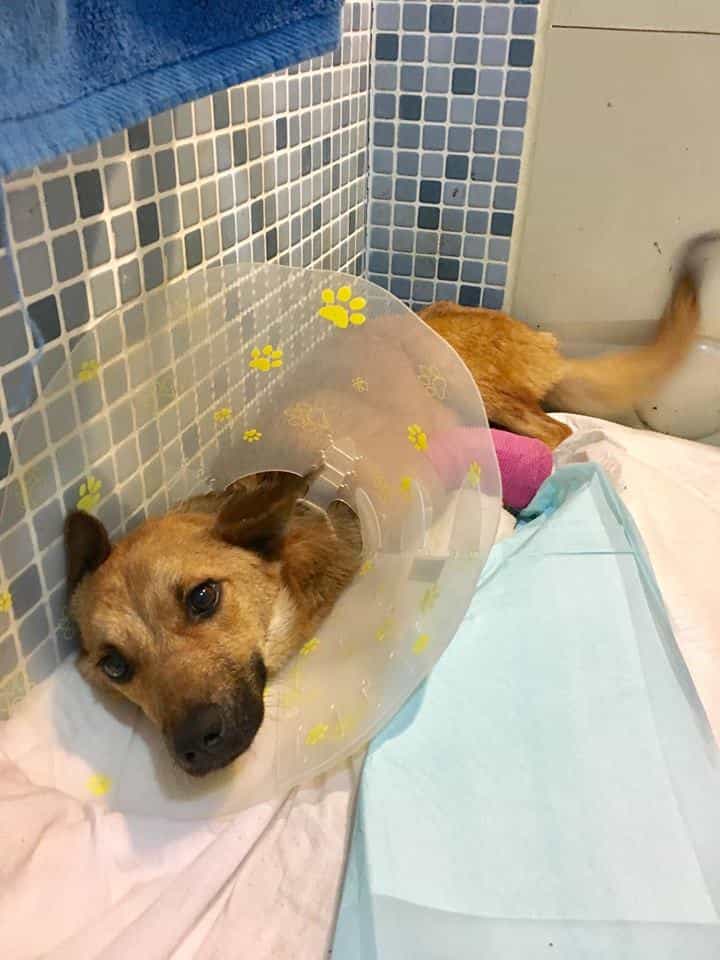 Sandy’s front legs were severely injured. One of them was missing a paw, and the bone was visible. The other one was hurt, but it looked like it was healing. McCormack said that the pup ‘was very happy to see us, but obviously in pain.’ 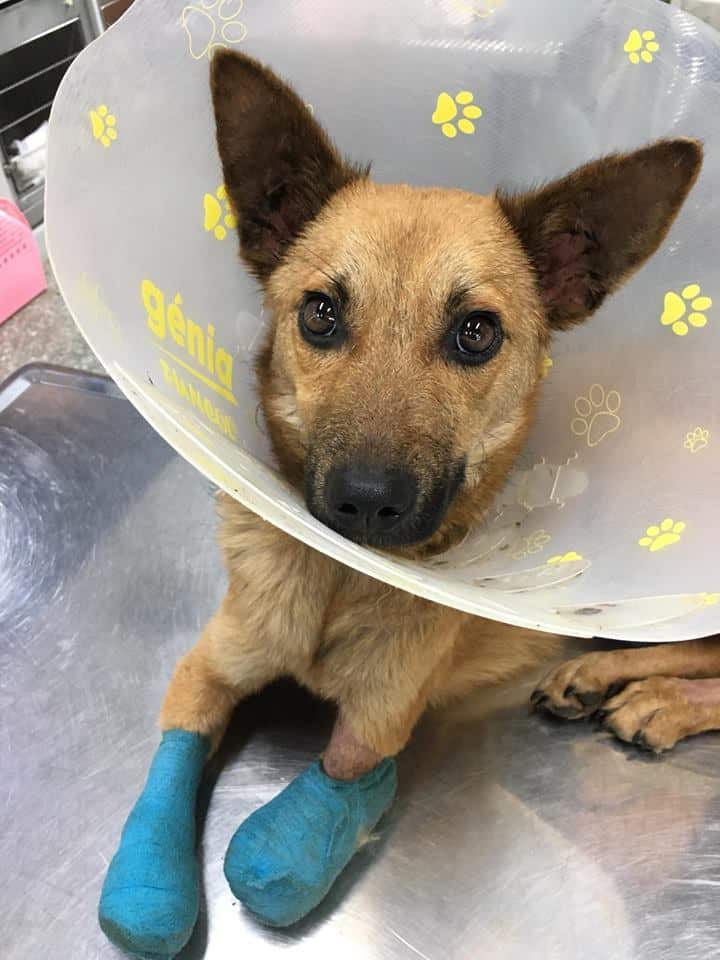 They bandaged the pup’s leg and put him into Tweedie’s backpack for the way back. The dog was too injured to wait, so the men resumed hiking down. They had to go back on the same difficult trail… 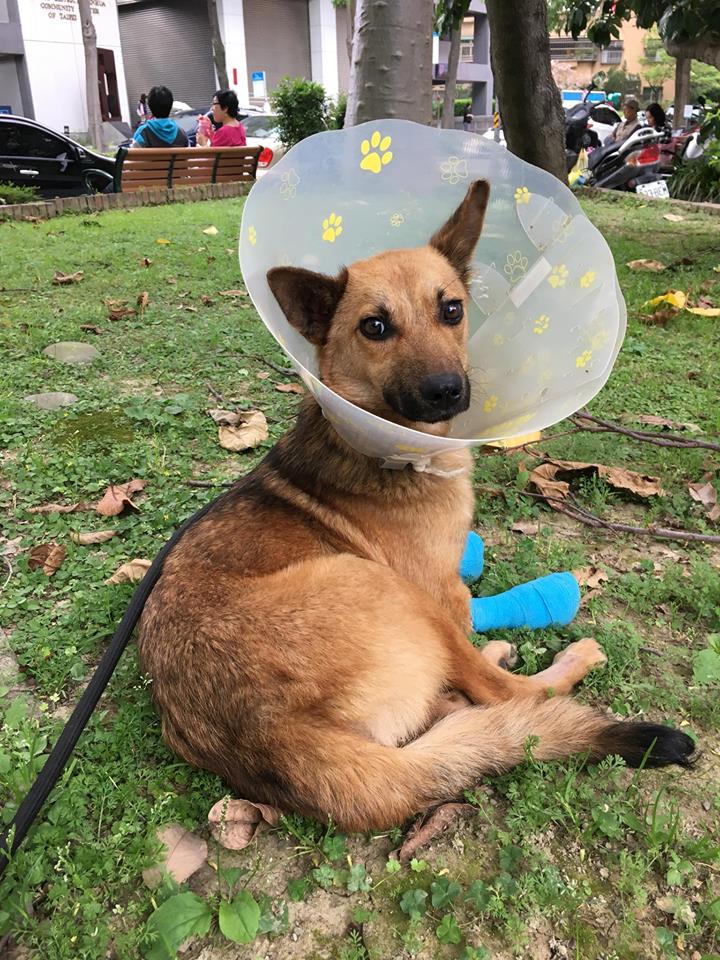 On his road back, Sandy was a very good boy: ‘he didn’t make a sound. He didn’t bark, he didn’t whine, he didn’t cry. He was an angel,’ Tweedie said. They finally reached the bottom of the trail and Sandy was taken to the vet.

4. Both Front Paws Were Amputated 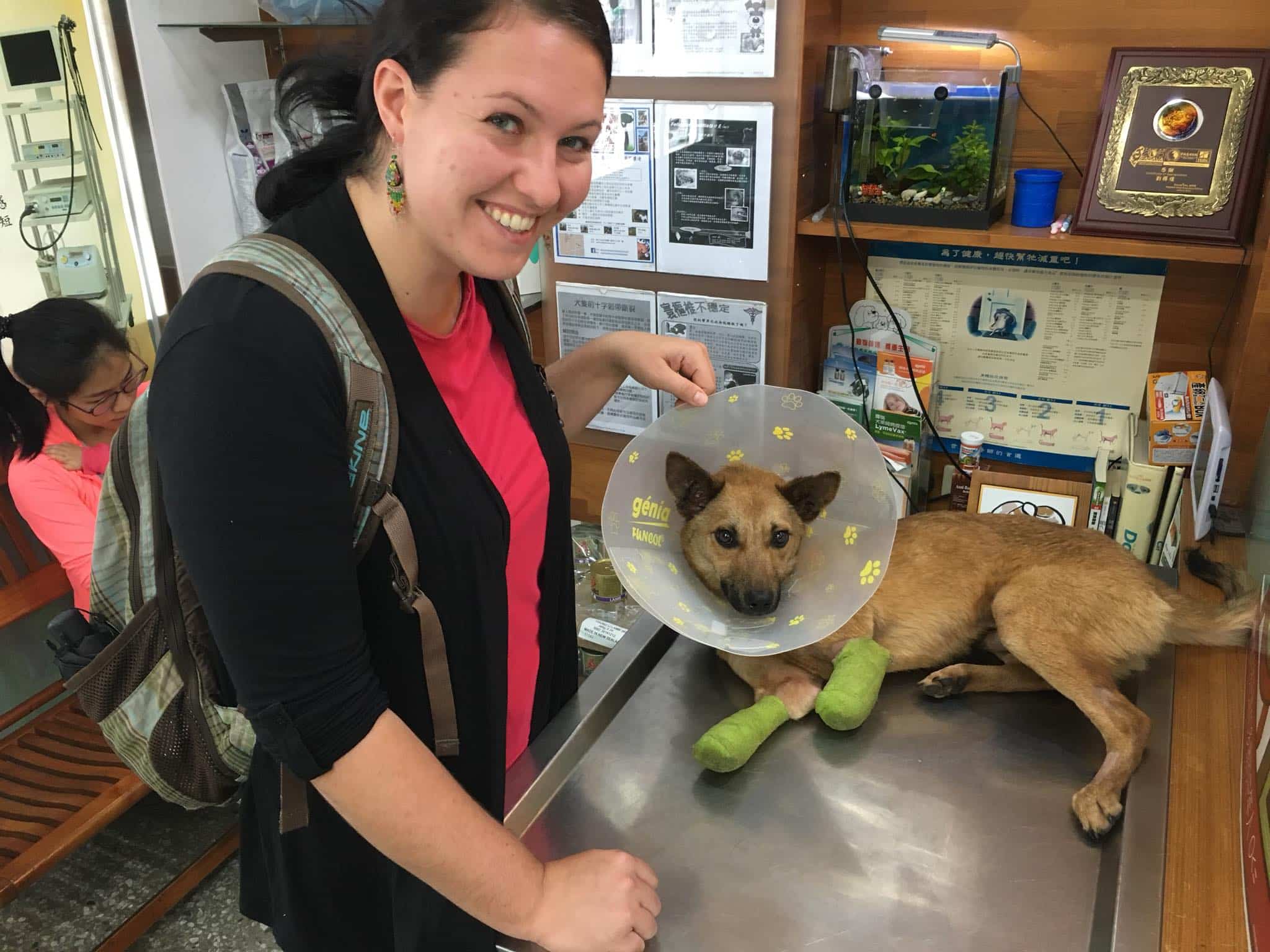 The vets had to amputate part of both front legs to save the dog’s life. As soon as his legs are healed, he will get prosthetics to walk and live a normal life. Until he got better, McCormack was Sandy’s foster father. This is what he said… 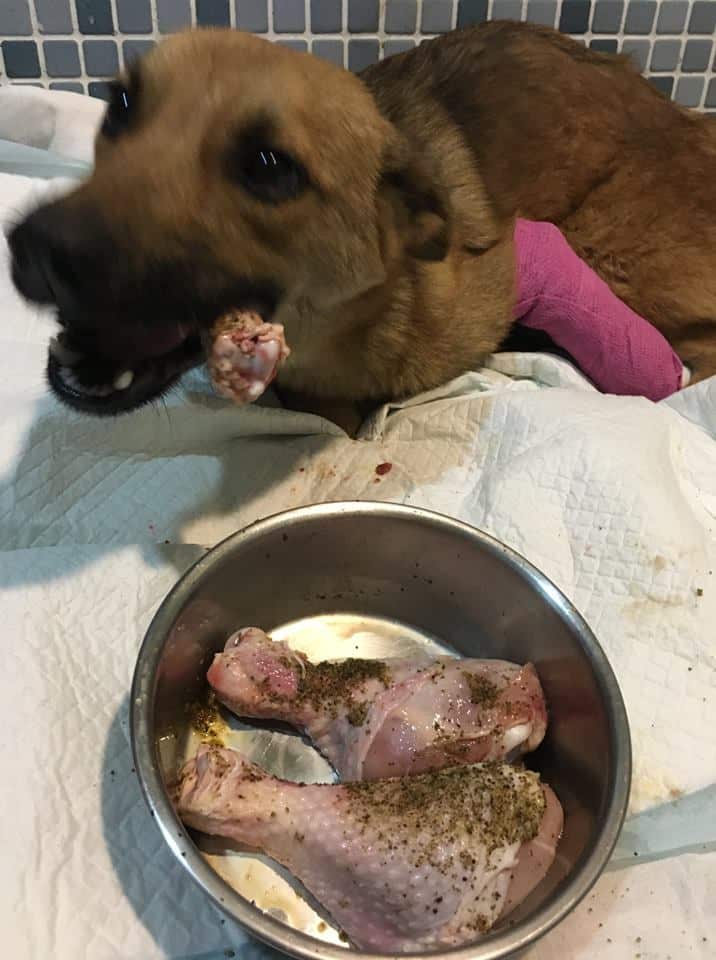 ‘He’s doing amazingly well. He was just so happy. He immediately started playing with some of the younger dogs here, and he’s just a very sweet, happy dog,’ said McCormack. And his life would get even better: Sandy got famous, and he found himself a home! 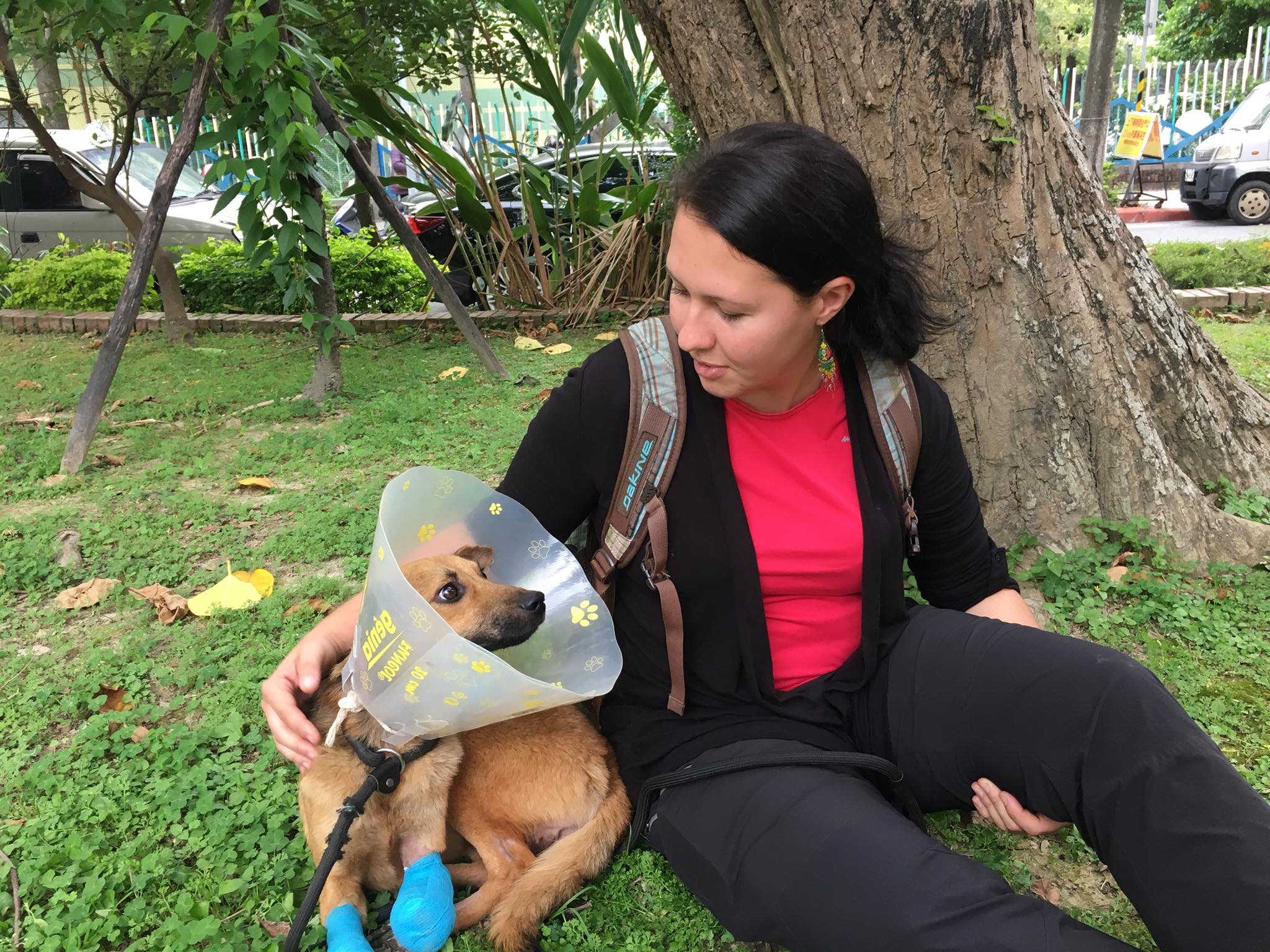 ‘When you transform the life of an animal, especially one that isn’t likely to get help from anyone else … it’s a very fulfilling thing to do,’ said McCormack. He then said that a restaurant owner in Taipei heard about Sandy’s adventure and offered to adopt him.

1. ‘Worth Every Second and Every Pound of Sweat’ 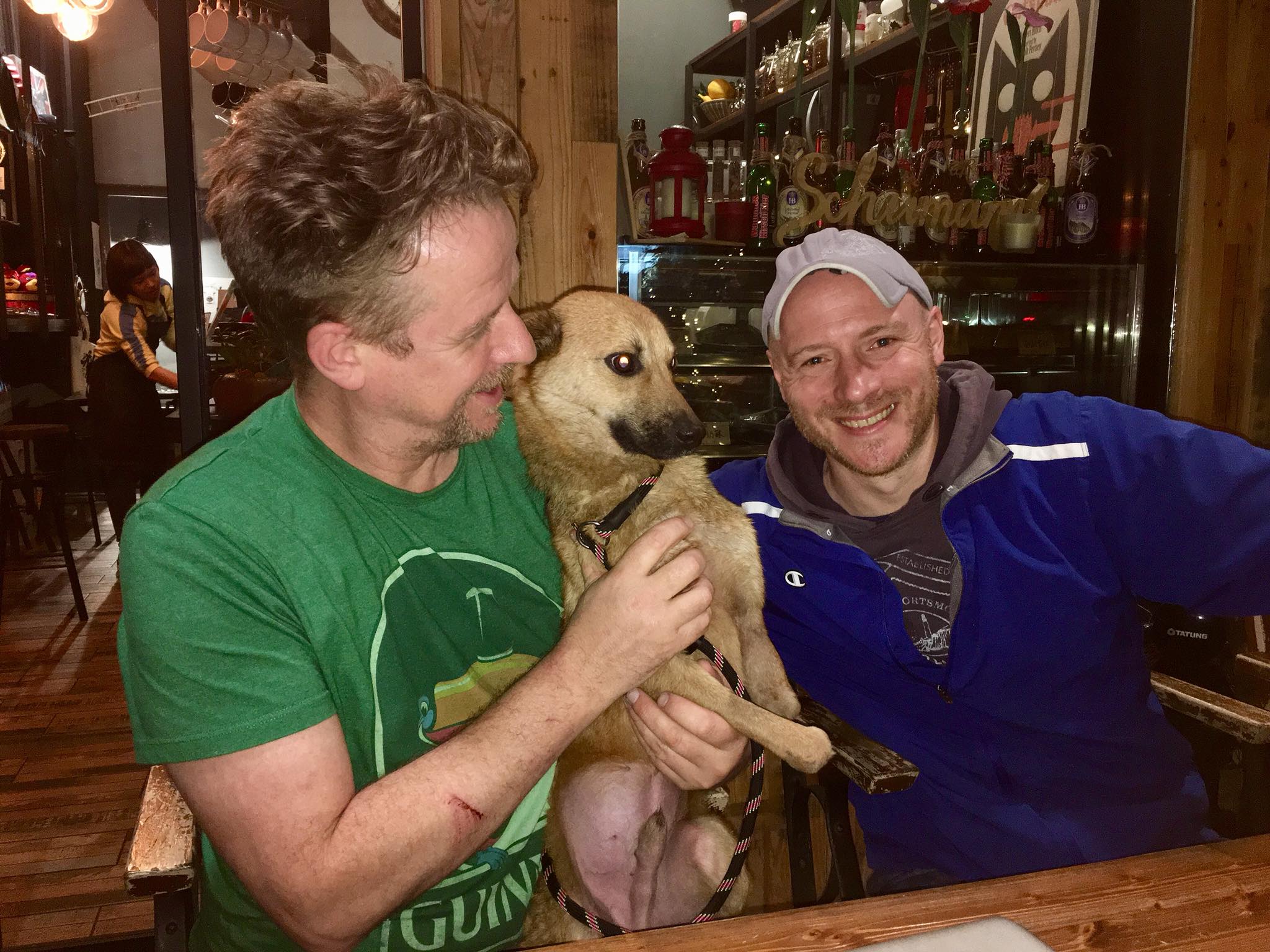 Tweedie concluded that ‘it all came together. There were so many things that could have gone wrong, but it didn’t. It was very much worth every second and every pound of sweat.’

Sandy now has a new life and a home thanks to these men who didn’t give up on him!