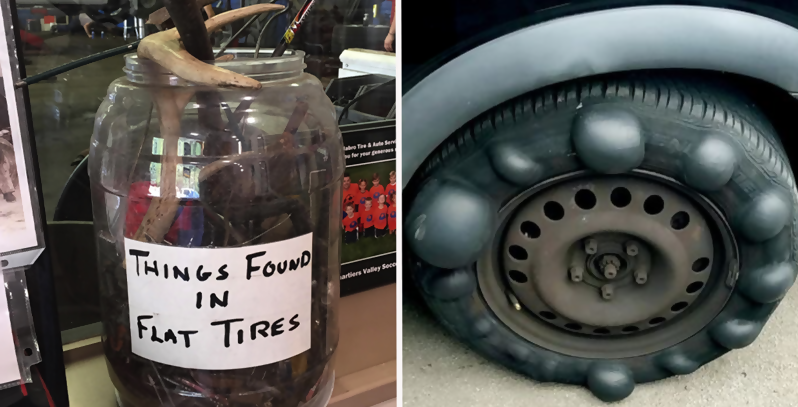 Cars are one of the greatest inventions. We use cars to get to work, drop off the kids at school, drive to our favorite vacation spot, and drive to our favorite football game. Can you imagine a life without cars? It’s important to take good care of your car. One of the most important parts of a car are its tires. If you have a flat tire, you can’t use it. Over time, many people have found odd objects in their tires. Here is a list of the top 20 strangest things people found inside their car tires’. 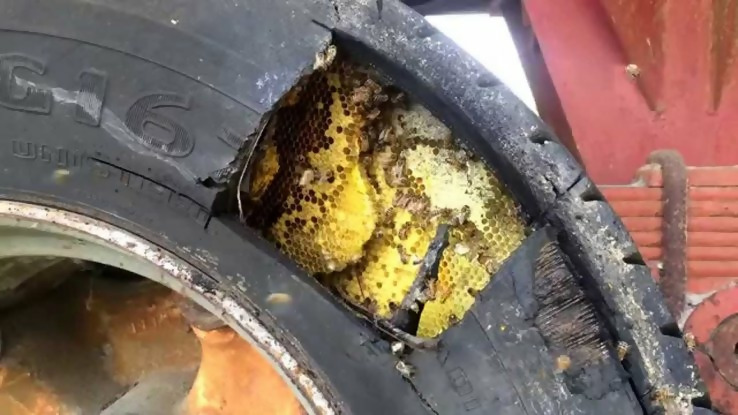 This may look like PhotoShop, but it is very real. Obviously, bees don’t mind where they set up shop, as long as they aren’t bothered. 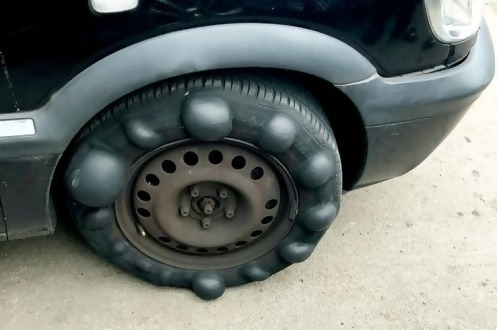 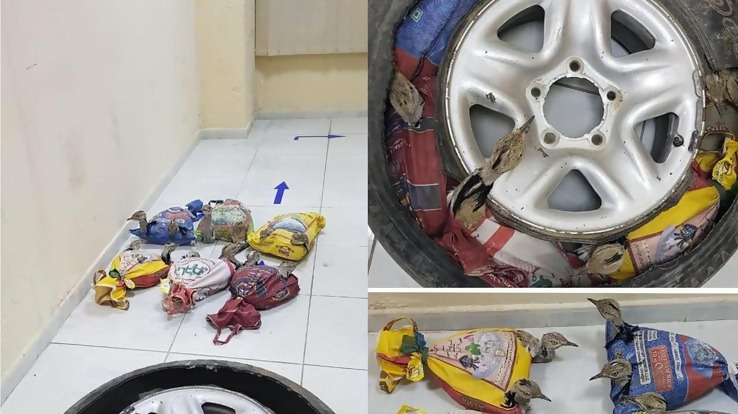 Be aware of where you set your tires at; otherwise, birds may try to make it their home. It looks like they were just trying to make the tire its shelter. 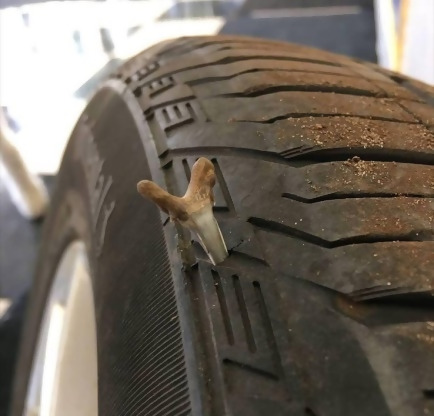 You don’t have to go to the sea to find a shark; a shark will come looking for you. It was reported on a forum that this is a shark’s tooth that got stuck inside a tire. 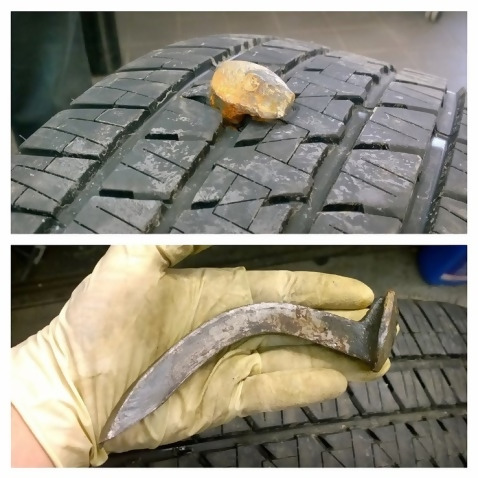 If you lose a tool, check your tire. The owner of this tool obviously didn’t want to find it this way. However, it happens to the best of us. 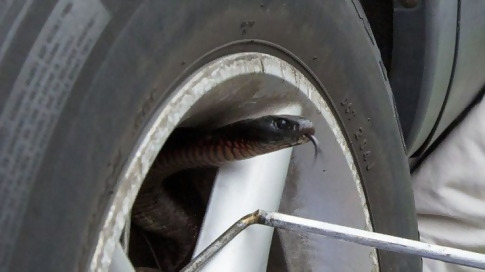 Almost every driver doesn’t like to see nails or objects in their tires, they definitely don’t want to see snakes. Most drivers don’t expect to see a snake in their tire. At least they will have an interesting story to tell their coworkers. 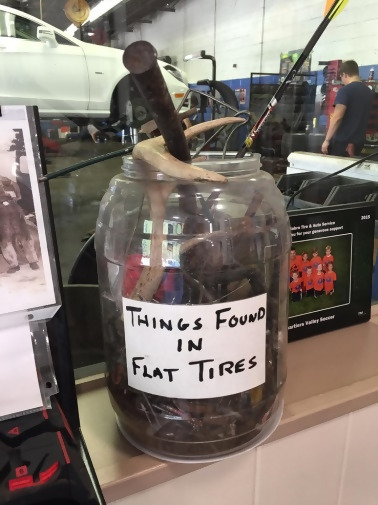 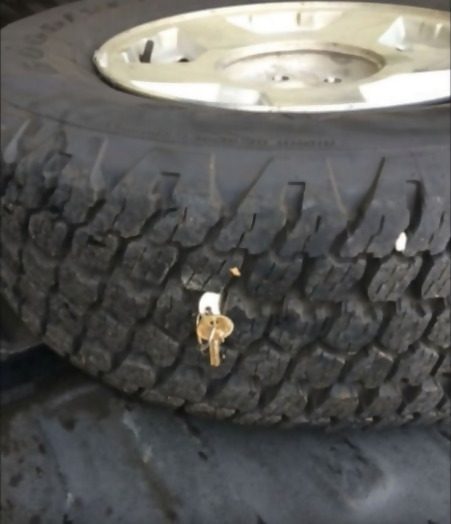 Did anybody lose their keys? Believe it or not, this is the second case we’ve found of keys being stuck in a tire. The keys would have to be sitting at an odd angle for the tire to pick it up. 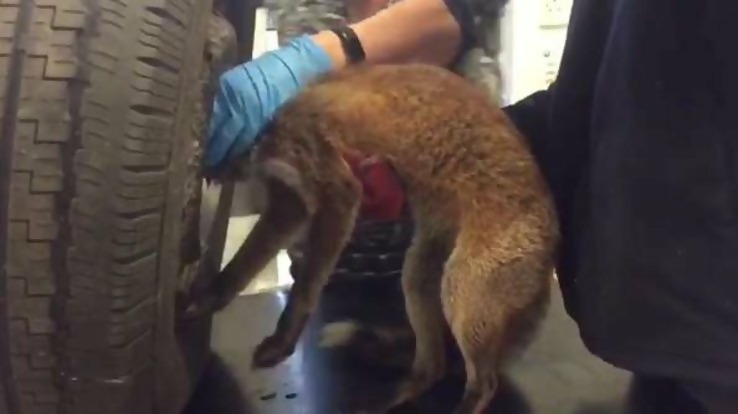 This is a sad case of an animal getting stuck in a tire. Luckily, it turned out well. Fortunately, there were nice people on hand to get the fox unstuck. 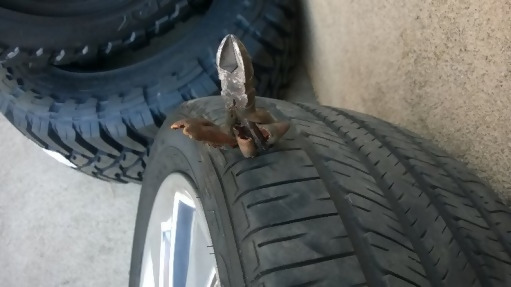 We don’t really understand how this could happen. It would make sense if the handles of the pliers were sticking out of the tires, but it’s opposite. The tip of the pliers, which is the sharpest point, is sticking out. 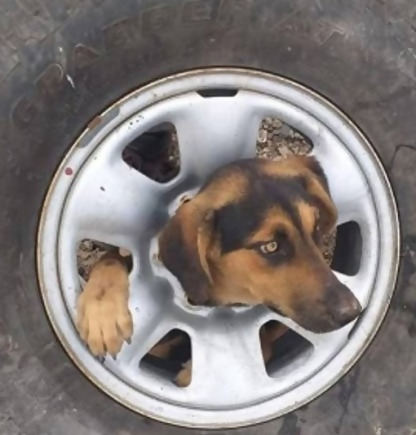 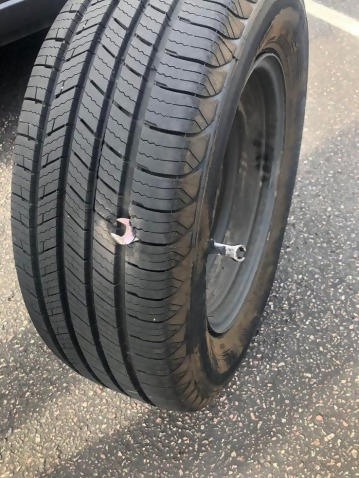 This one would be frustrating, since the wrench went straight through the tire. There must’ve been a ton of pressure behind that wrench.

It looks like the tire sucked the ratchet inside. What’s odd about the ratchet going inside is that none of the sides of this tool are sharp. This is something you don’t see often. 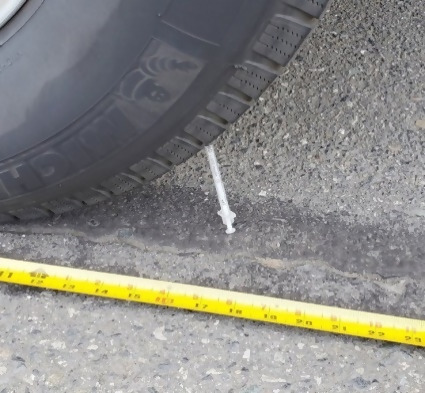 This is an odd object to just be lying around on the road. A needle should definitely not be on the streets, because it’s dangerous to drivers and pedestrians. 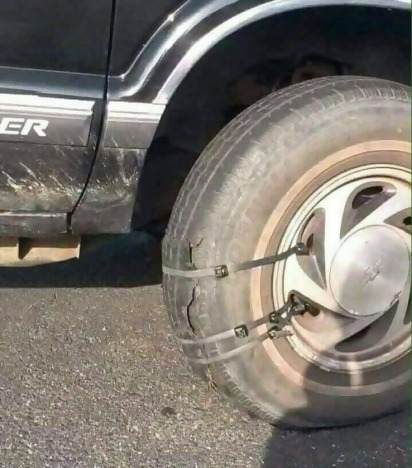 When your budget is tight, and you don’t have the money to fix your car- you get creative. This driver found a semi-solution to his problem. 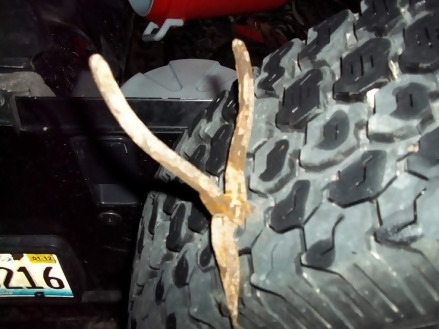 Here’s another set of pliers that punctured a tire. But with these pliers, the sharp end went in first, not the other way around. 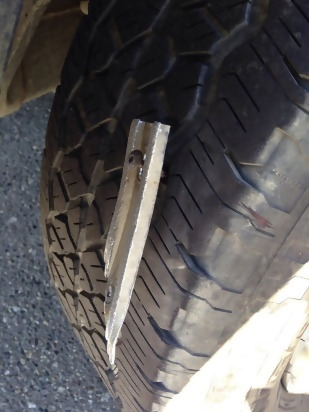 Nobody wants a flat tire. However, it happens. In this case, the driver ran over a metal object. Talk about a bad day.

This almost looks like someone was practicing knife throwing and one landed in a tire. Maybe next time they should try throwing the knife at an apple. That would have been less expensive. 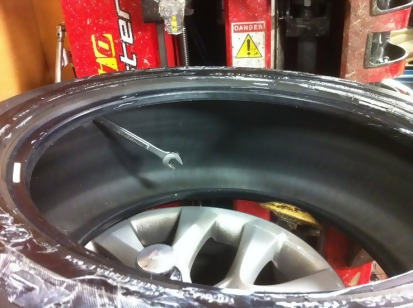 Here’s another example of a wrench inside a tire. However, this one is a tad different. Even though, the other wrench entered and exited on the outside of the tire, this one stayed on the inside. 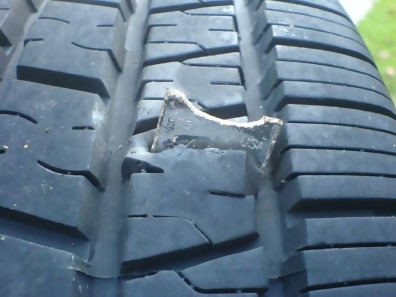 You never know what will puncture your tire. In this case, two people ended up having keys in their tire. One of them lost their keys while the other person found the keys, but they had punctured their tire. Up next learn what it means if you see a bottle on your tire 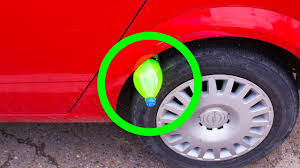 This is something criminals use to distract the driver and get them out of the car. How it works is they will typically place it on the passenger side where you may not notice it. When you begin to move the bottle will obviously make strange noises that will more than likely prompt you to get out of the car and investigate what you may have ran over. Since you more than likely left your valuables like your phone and purse inside your car, the crook will be close by and as soon as you walk to the passenger side of the car, he’ll run up and grab your valuables and run, or just take your car all together leaving you stranded.