After Getting Some Love, You Won’t Believe What This Matted Senior Dog Looks Like

Rescue workers at a New York City rescue center are sadly accustomed to seeing very ill and abused animals. However, when a dog named Astrid arrived on their doorstep, even they were shocked and appalled by what they saw. What happened next is an incredible story of survival and hope. 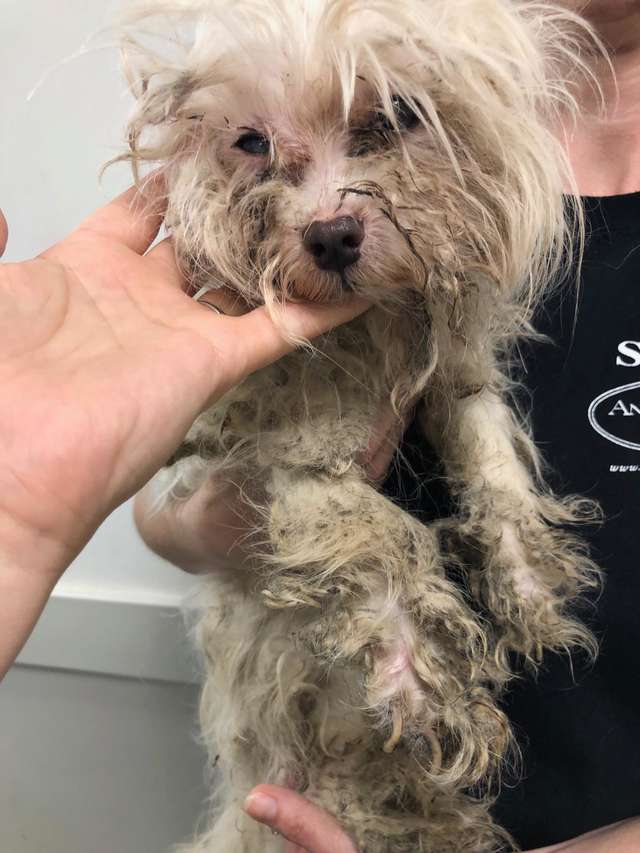 Astrid the dog is a 10-year old Maltese mix. Her beautiful white fur was so filthy it was brown and matted. Her paws were covered with waste. Her claws hadn’t been cut in many months or years, and they even started to curl. It was almost too painful for the small dog to walk. 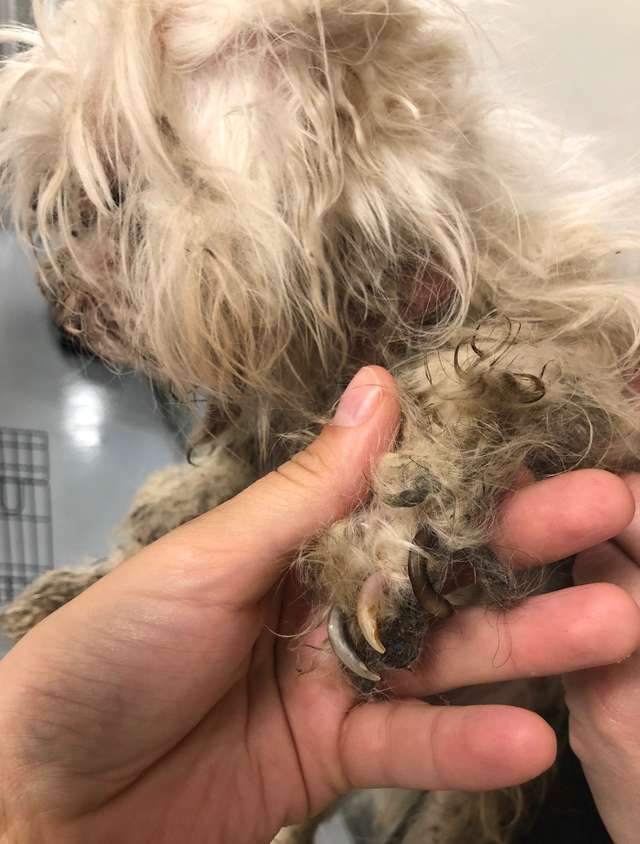 No one was sure who had been responsible for the abuse and neglect. The person who surrendered her claimed not to know anything about the dog’s history. This left the people at the shelter confused about Astrid’s life. Was she sick or did she need to be put down?

“She was brought in by someone who seemed to be a homeless person claiming that a family member had died and left him the dog,” said Tiffany Lacey, executive director of Animal Haven. “The human was in terrible shape as well as the dog, so we took Astrid in on the spot.” 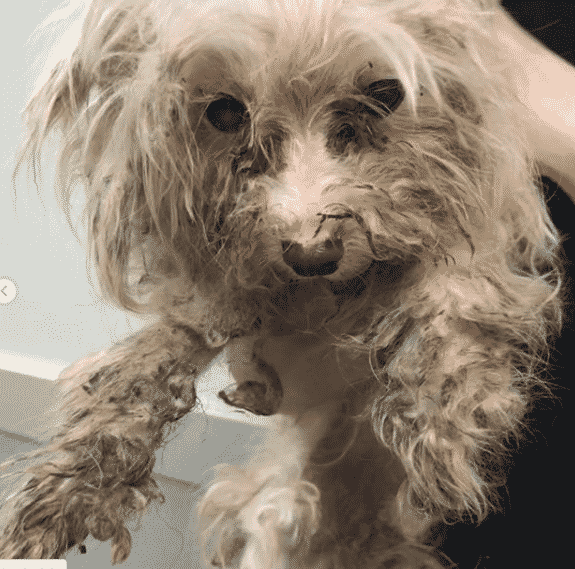 Astrid was also confused. She didn’t even know how to react to shelter life. “She was covered in mats and spinning in circles,” Lacey said. “We are afraid she was left in a small confined area for long periods of time.” 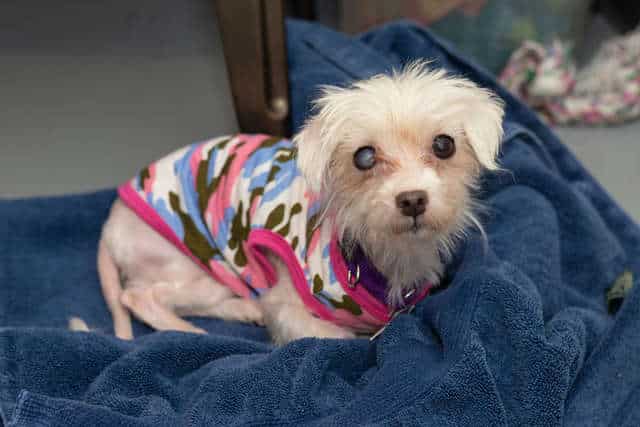 Astrid had to see the vet. Afterward, she got her chance at a spa day. Workers bathed the dog and cut her nails. They removed the matted fur. Astrid was placed in a special swaddled jacket. The warmth started to bring out another side to Astrid.

12. Volunteer to the Rescue 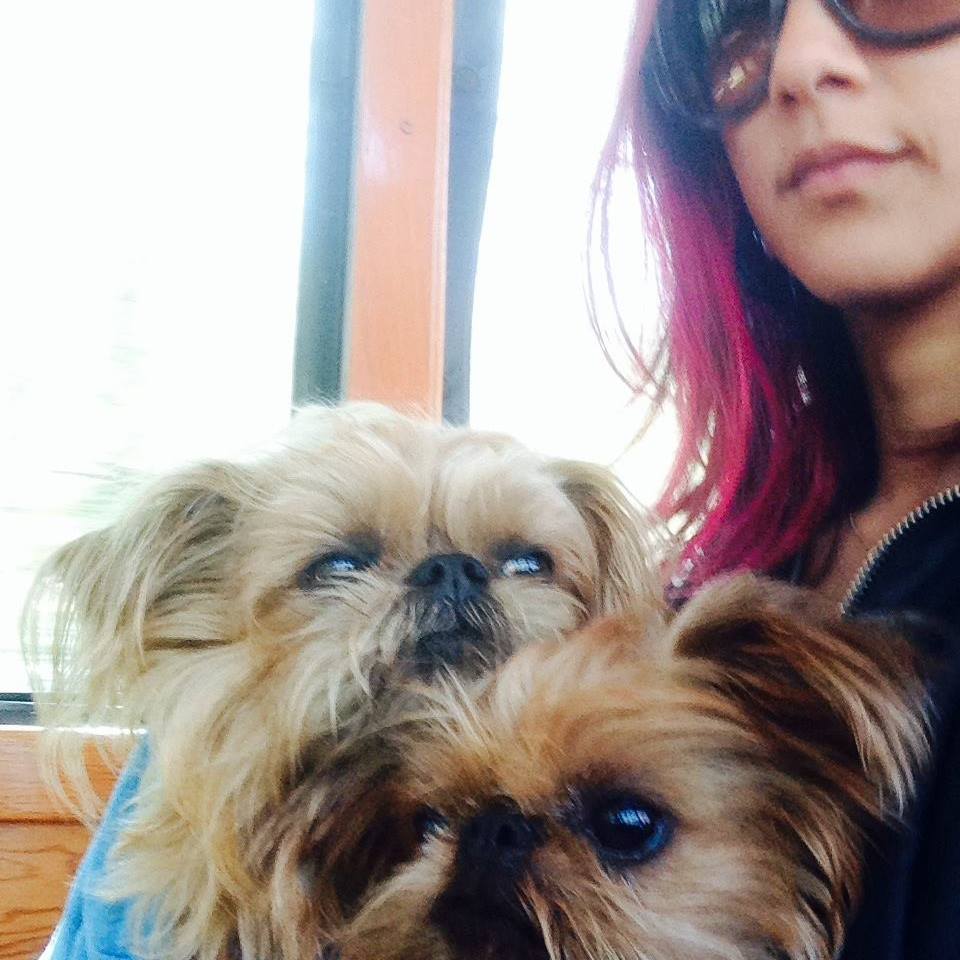 Mindy Lui is a volunteer who had seen the dog on the first day she turned up at the shelter. She felt that the dog was not hopeless. If only she could get the shy dog into a home rather than a shelter, she felt certain that Astrid would make a wonderful pet. She just needed to feel safe. 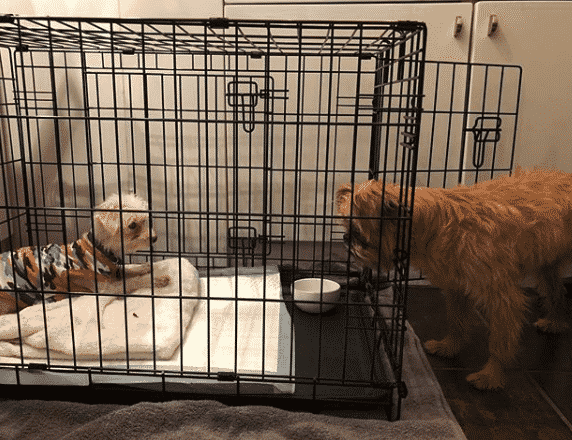 Liu wasn’t necessarily waiting to adopt or foster another pet. She already had three rescue dogs. Adding an older dog with special needs was a risk. In the end, however, Lui was determined to take the dog in and make her part of the pack. Astrid is currently settling in nicely. 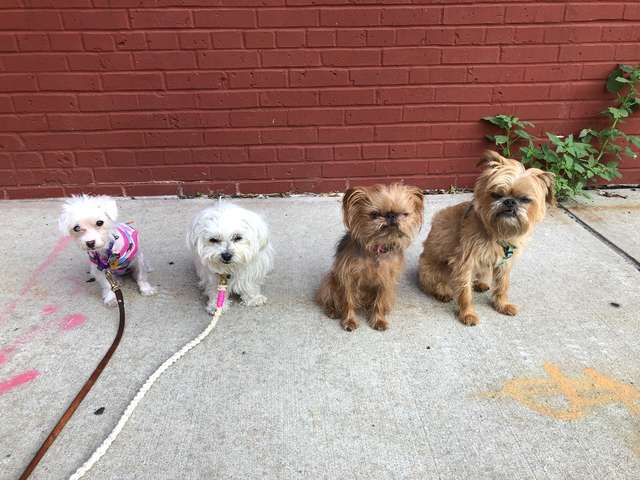 “We don’t just foster any dog because it really can change the dynamic of the household and we know our limit on what energy we can handle without overwhelming the balance of the house,” Liu said. “I also go with a gut feeling and know who is meant to come home with me and that’s how I felt with Astrid when she first came into the shelter.”

The dog was skittish around people. She wasn’t used to getting affection from anyone. “She is a bit awkward when you pick her up,” Liu said. “Her legs stiffly stick out, so we know she wasn’t carried much.” The little dog had much to learn. But could she learn to be loved? 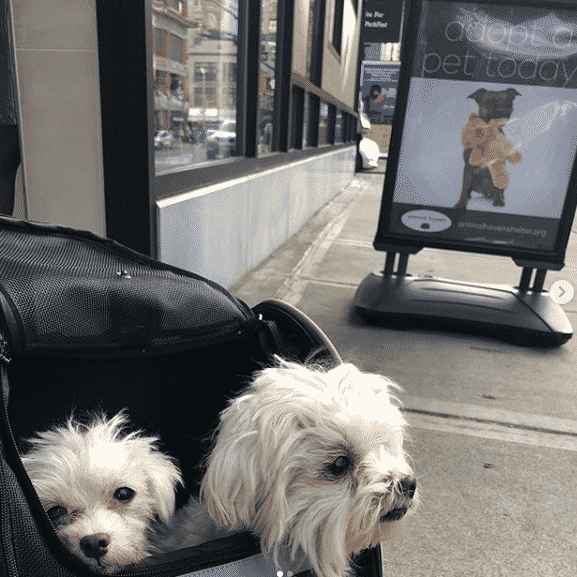 Lui is an old experienced hand at caring for animals who have wounds – both physical and mental. She expects that the healing process will take time. But Lui decided that the dog can live with her for as long as it takes for her to feel comfortable. Only then will she be adopted out to her forever home. 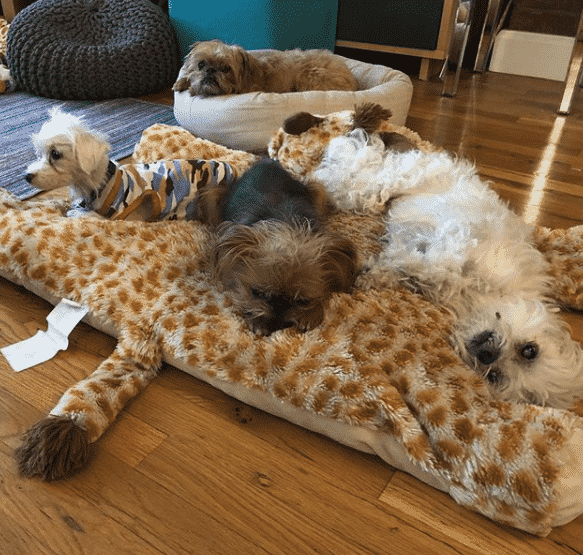 But for now, Astrid is getting into a good groove. She has three new doggie friends: Beatrix, Kiddo, Chinta, and Hanzo Blade of Steel.  Chinta was saved from a dog meat farm and is also a rescue up for adoption.  The four dogs take stroller rides around New York. They make an incredible squad of city pups. 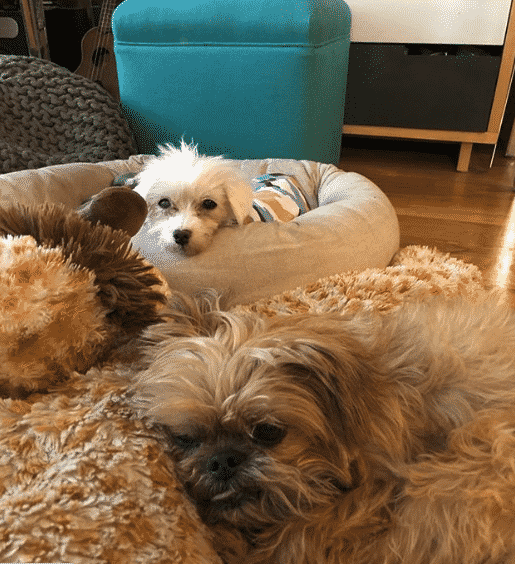 “I’m surprised at how calm she is coming into our house with our three dogs,” Liu said. “She’s not overly interested in the other dogs and at the same time not intimidated by them either.” In other words, Astrid is doing her own thing. 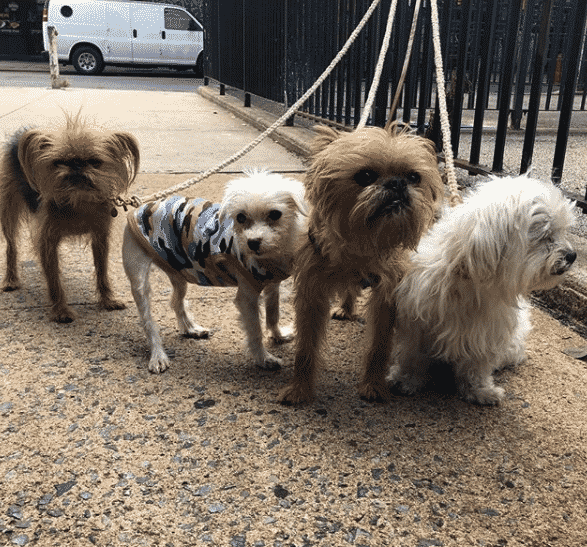 Walking is still not easy. She wasn’t used to walking or moving around, so her leg muscles remain weak. It can be a struggle for Astrid to stand and support her own weight. They hope the problem will improve with time and plenty of walking. Practice makes perfect! 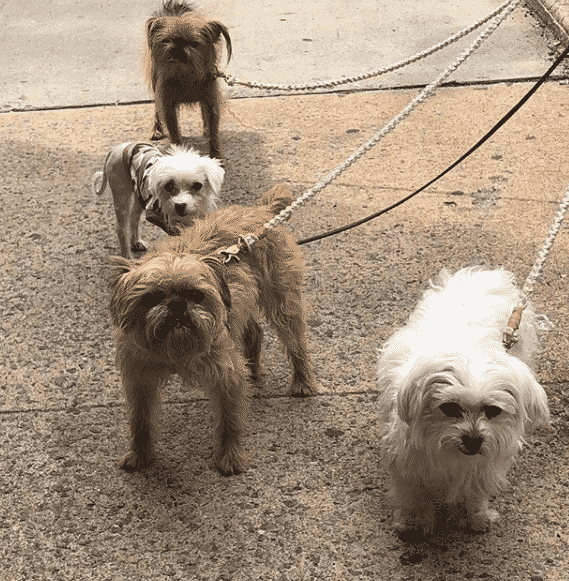 “It’s almost like she’s a doe with her skinny legs learning to walk for the first time,” Liu observed. “Astrid also seems confused by her tail. She will be walking then suddenly spin to nip at her tail.” Astrid is slowly learning to overcome her hitches and can now keep up with the rest of the pack for a whole block.

But step by step, Astrid is showing new sides of her personality. She enjoys her dog friends and is starting to show affection to her foster mom. No one is rushing Astrid. She is in a home where she can grow at a stable pace. Thankfully, she learns a lot from her dog friends. 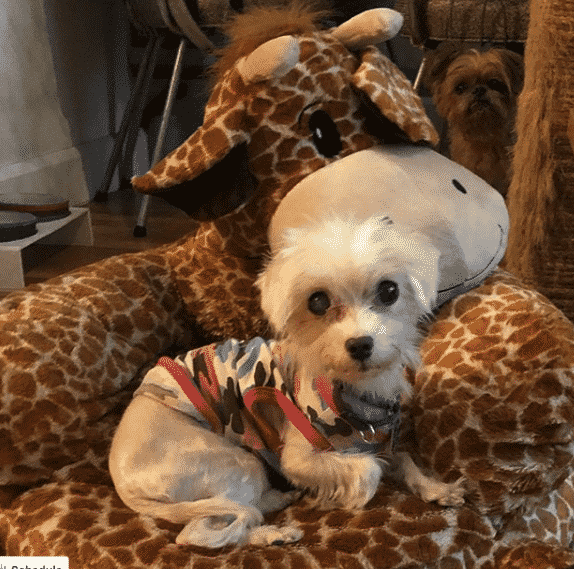 “Right now she’s a little observer watching us — I mean, just staring,” Liu said. “She’s timid, but not scared. If you put her on a towel, bed, or something soft she will just curl up and lay down to relax.” That’s a big thing for this little dog! 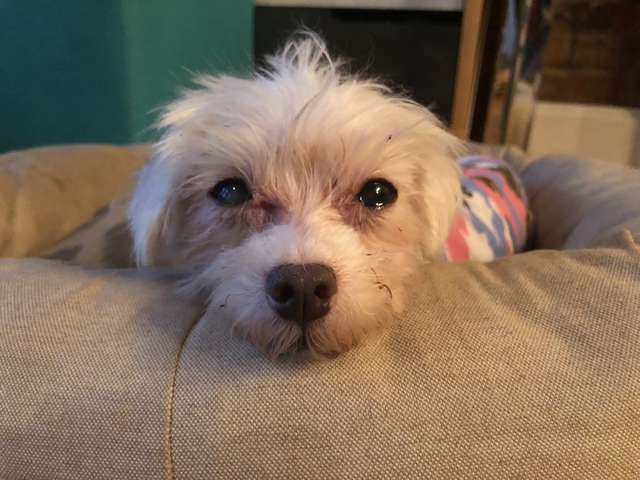 With love and care, Astrid has already come a long way. The dog looks completely different than the one who showed up at Animal Haven. Now, Astrid is a Manhattan dog who is used to the sights and sounds of the city. She will make a great pet for any family. They’re already meeting potential adopters for the sweet girl!