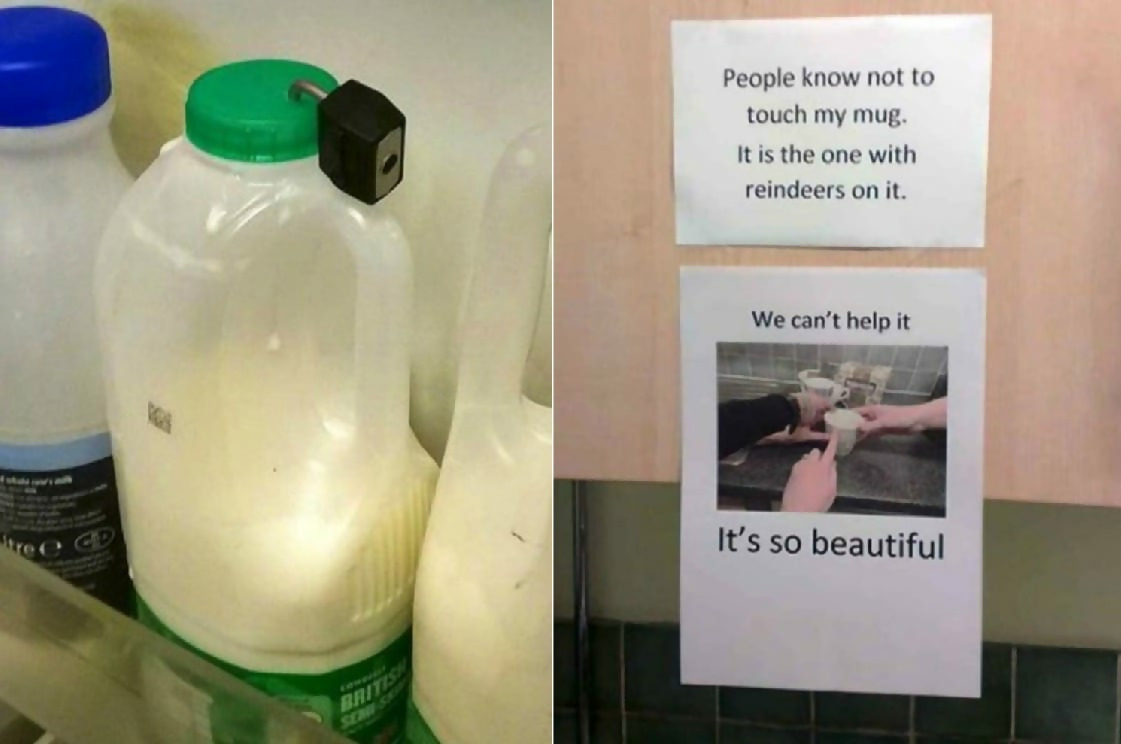 People who work full time jobs in an office actually spend most of their waking hours sitting at their desk in their office. To make the experience more pleasant, coworkers become friendly and even play pranks on one another to keep their daily lives interesting. Here are some pictures that prove just how much fun working in an office an be. 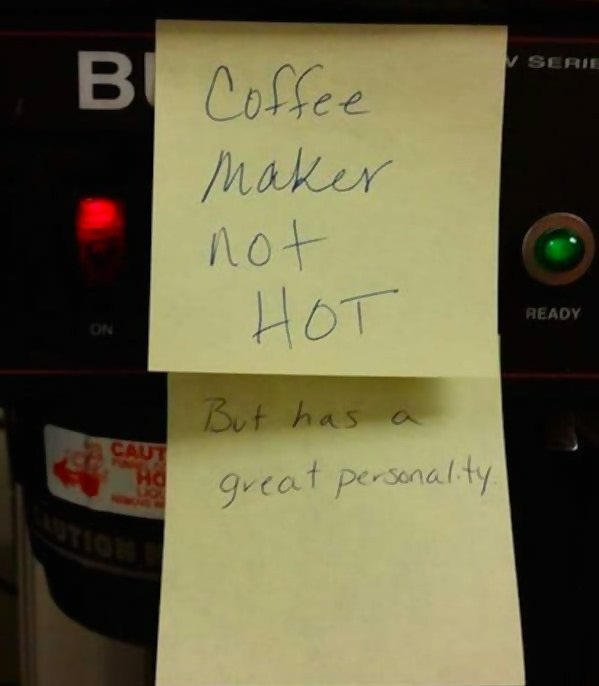 Leaving sticky notes around the office is pretty common. However, this coworker decided to be funny and respond to one of the notes. This coffee pot must feel pretty confident. 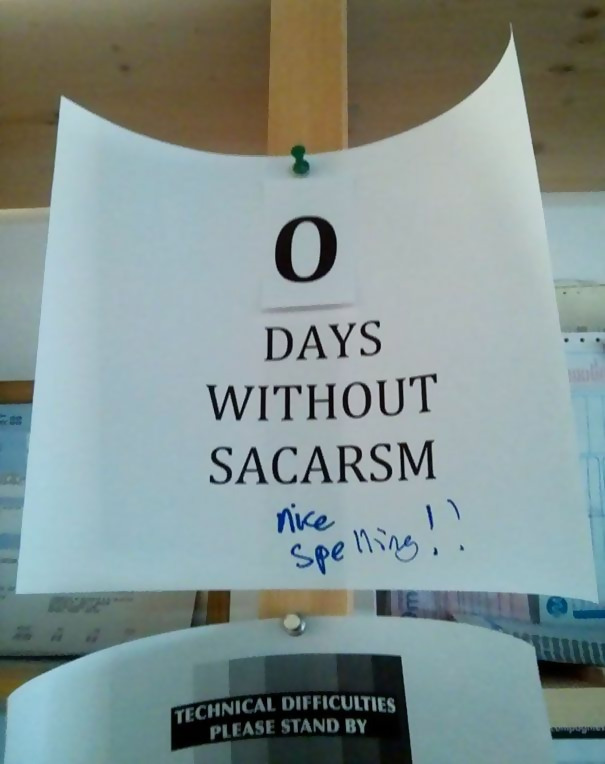 Some people enjoy the occasional sarcastic remark. Others find it annoying and sometimes even rude. This coworker just couldn’t help themselves when it came to this sign announcing how long they had gone without any sarcasm.

Some people get a little too literal when it comes to signs hanging up in the office. At least we know that these people flushed the toilet and nobody will be walking in on an unwanted surprise. 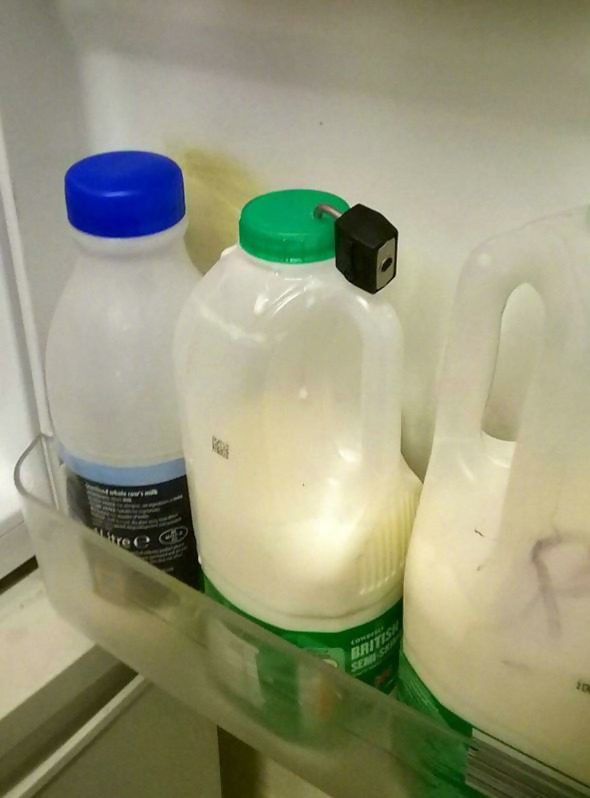 Some people get pretty territorial when it comes to their food in the office fridge. This person took it to a whole new level by locking their milk so that nobody else could use it.

Cardboard cutouts are the ultimate pranks when it comes to scaring people in the office. This Mr. Bean cutout is just waiting for someone to walk into the bathroom and scream.

Have You Seen Me? 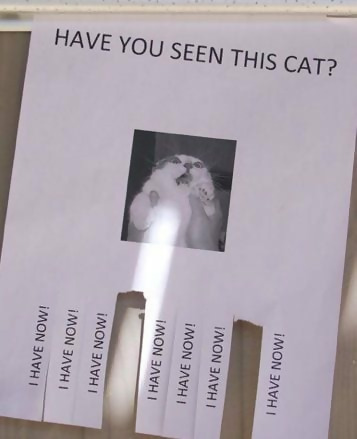 It’s a pretty sad thing when someone loses their pet. Although, this wanted sign is pretty hilarious! Hopefully all of the tabs are taken before their lunch break. 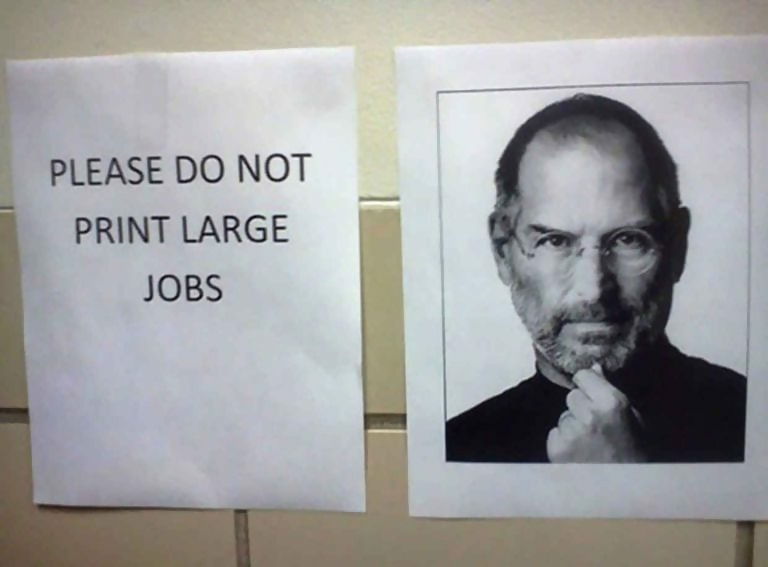 Once again, some offices are just full of jokesters. This coworker wanted to stick it to the man and break the rules while not actually breaking the rules. It gave us a pretty good laugh. 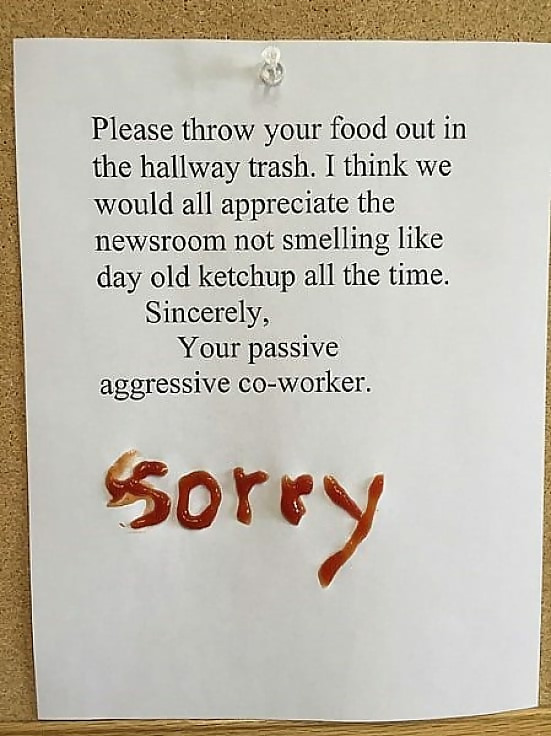 When it comes to being passive aggressive, two people can play the game. You have the one who initiates it and the other who keeps it going. It can be a long and tumultuous war. 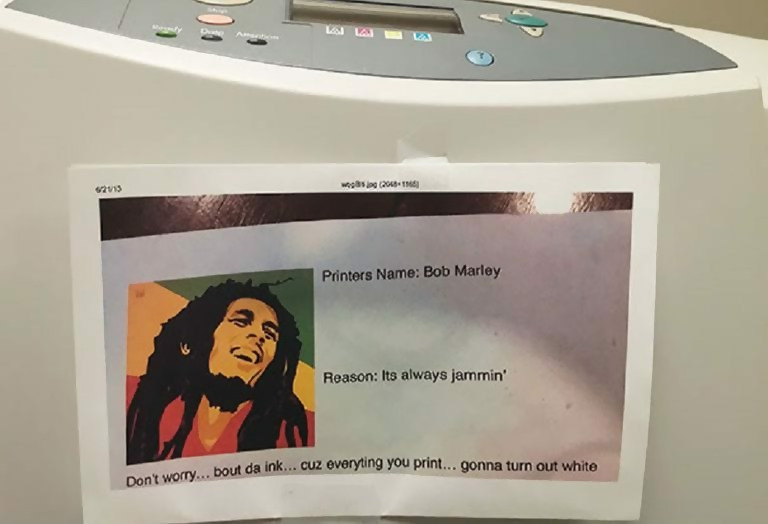 No matter where you work, the printer will most likely be the bane of your existence. At least these employees can make some light of their printer always getting jammed. 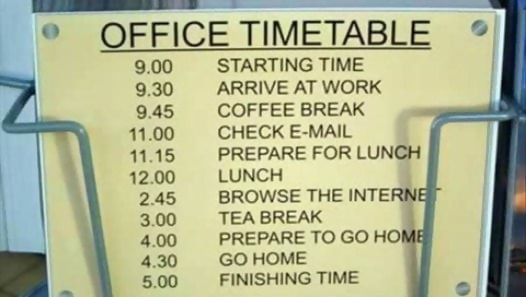 If you think you’re going to be productive every single day you’re in the office, you have another thing coming. This is the typical set of events that will take place at the office. 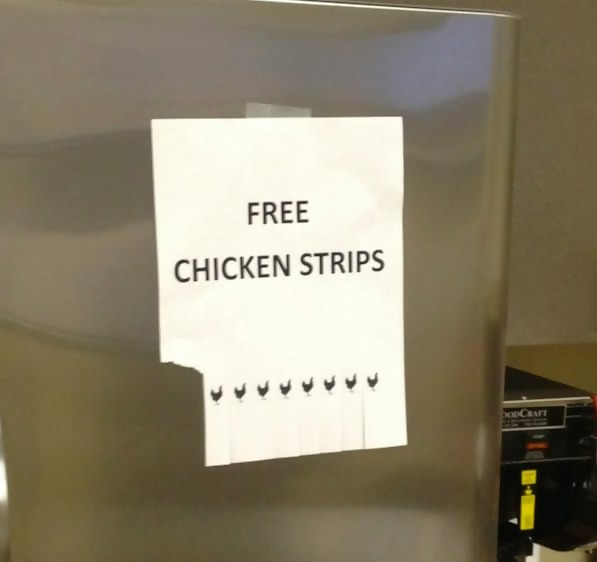 Everyone loves free food in the break room. Unfortunately, when these employees heard of the free chicken strips, they didn’t expect to find this hanging on the wall. 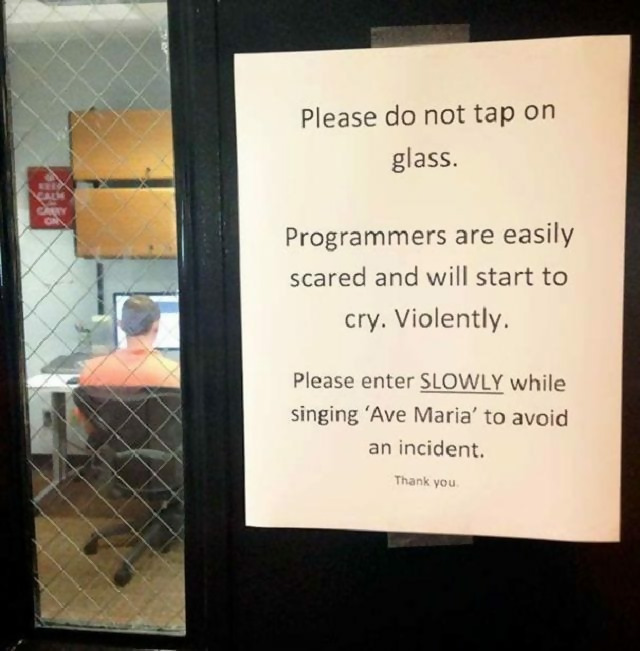 Every department has a stereotype. The members of the programming department are all very anxious and need some warning before someone enters their workspace. 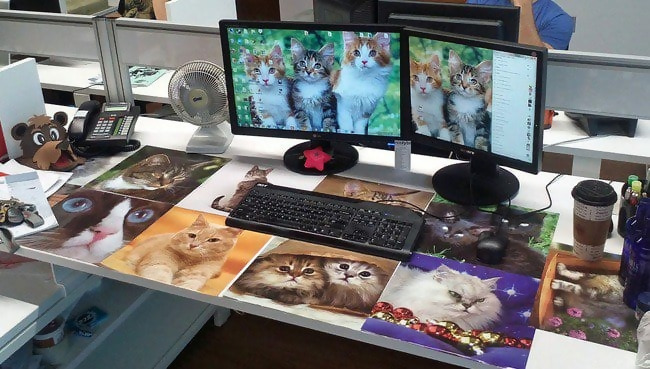 People like to personalize their office space to make it feel more like home. It’s also a great way to get to know your coworkers’ personalities. This particular employee really loves cats. Like, really loves them. 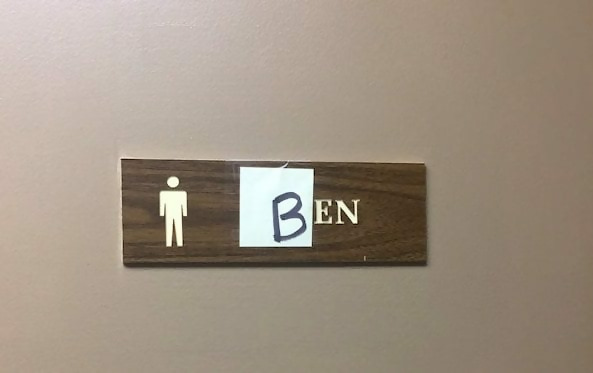 The only male employee in the office just so happened to be named Ben. So, he turned the men’s room, which he was the only one using, into the Ben’s room.

Living at the Office 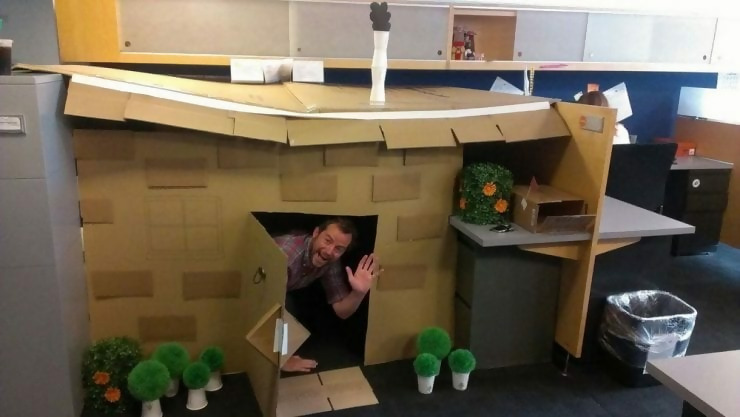 Sometimes it feels like you live at the office, especially when working on a big project and putting in overtime. So, to make it feel more cozy and like home, this man built himself a house out of cardboard boxes. 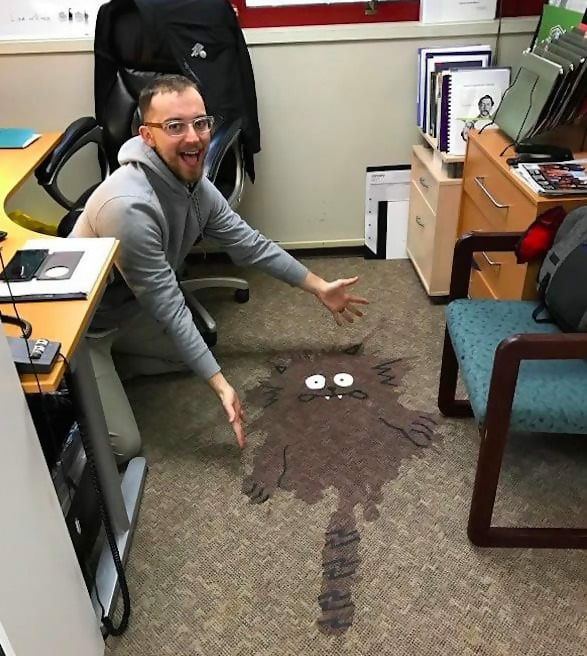 We sure hope he works in the graphic design department. This employee spilled some coffee on the floor and the stain wouldn’t come up. So, he decided to give the office it’s own pet, a coffee cat! 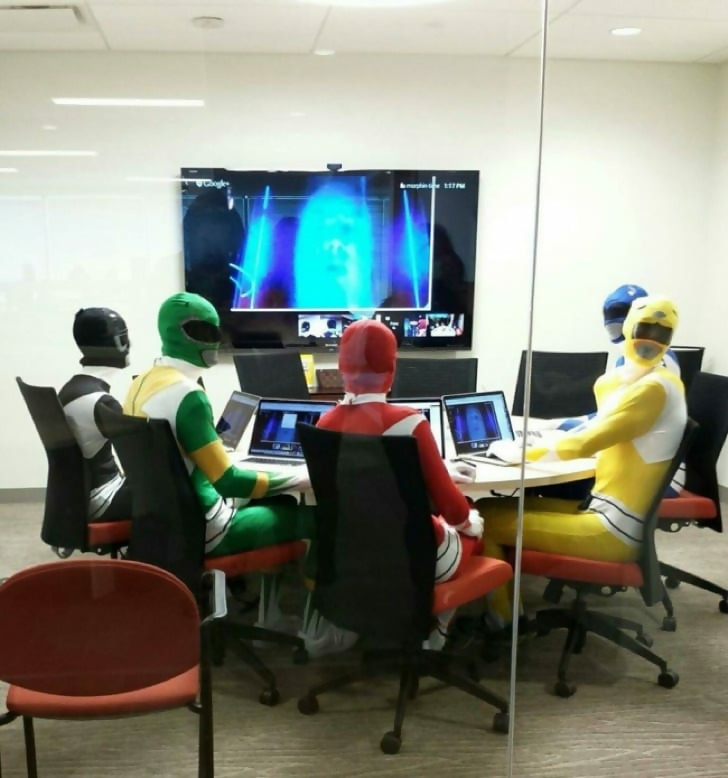 Some offices are pretty lax about their dress code. This office in particular encourages their employees to express themselves. These particular employees feel their best dressed as Power Rangers. 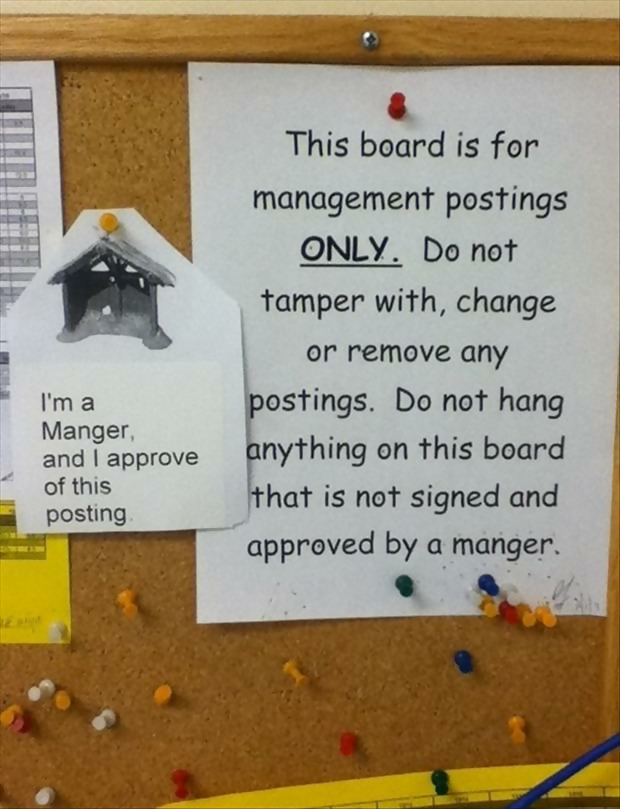 Employees should always double check their spelling before posting something in the office. Someone is bound to make fun of them if there’s a mistake. 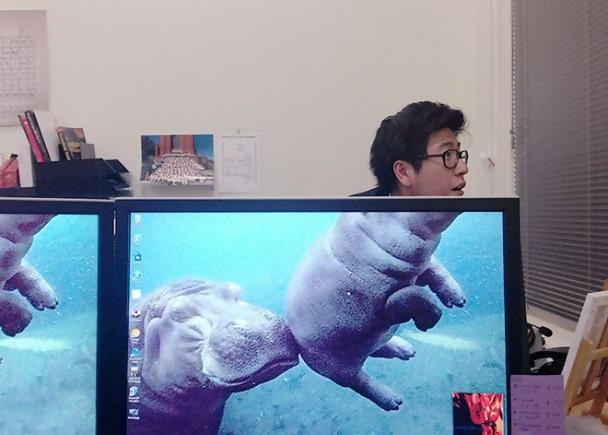 Seeing the same people all day everyday can be pretty monotonous. This employee decided to entertain himself by putting this background on his computer. Now his coworker has the head of a human and the body of a hippo. 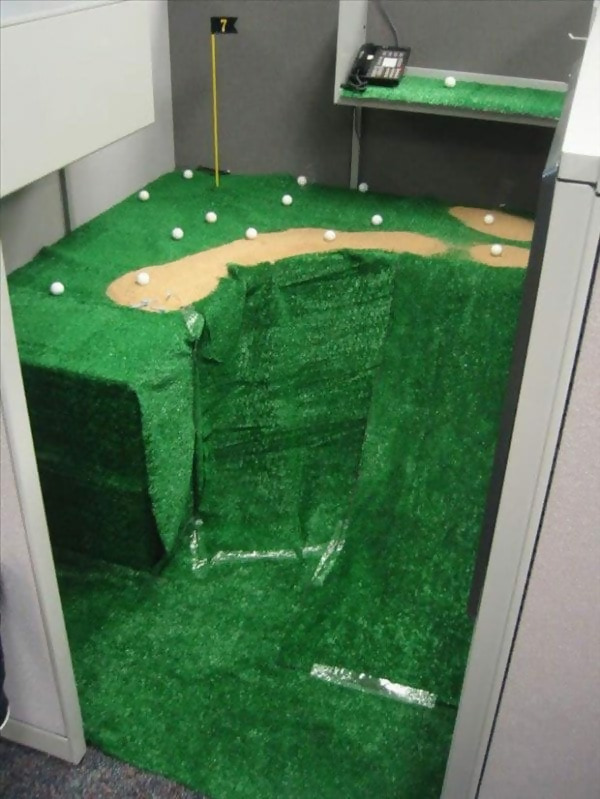 Some jobs allow employees to go out on the links and hit some balls. Others only let their employees pretend to play golf in the office. Either way, they’re having a great time.

Debbie is a Thief 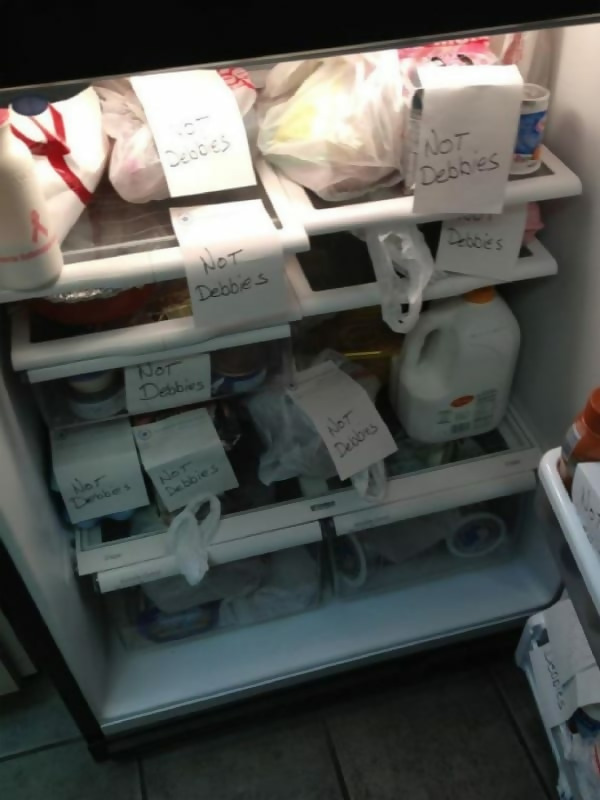 It turns out that Debbie is known for stealing food from the office fridge. So, everyone banded together and let her know that their food is not hers to take – in a nice way. 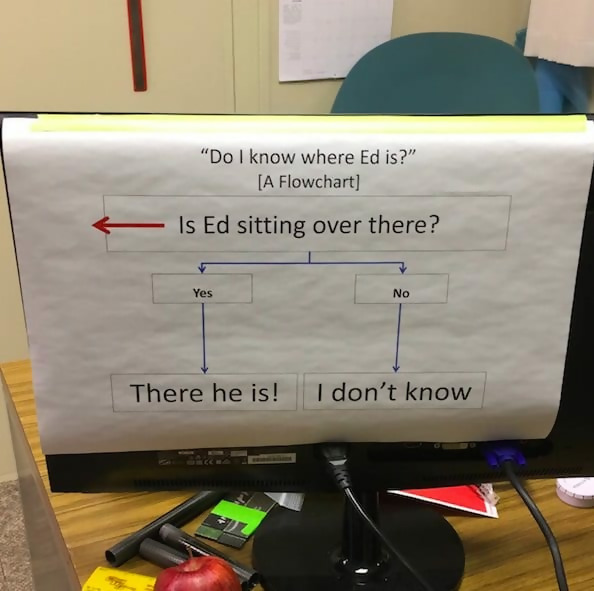 Apparently this employee has been asked one too many times where their coworker Ed is. So, to keep people from annoying them, they created this flow chart to help them figure out where Ed is located. 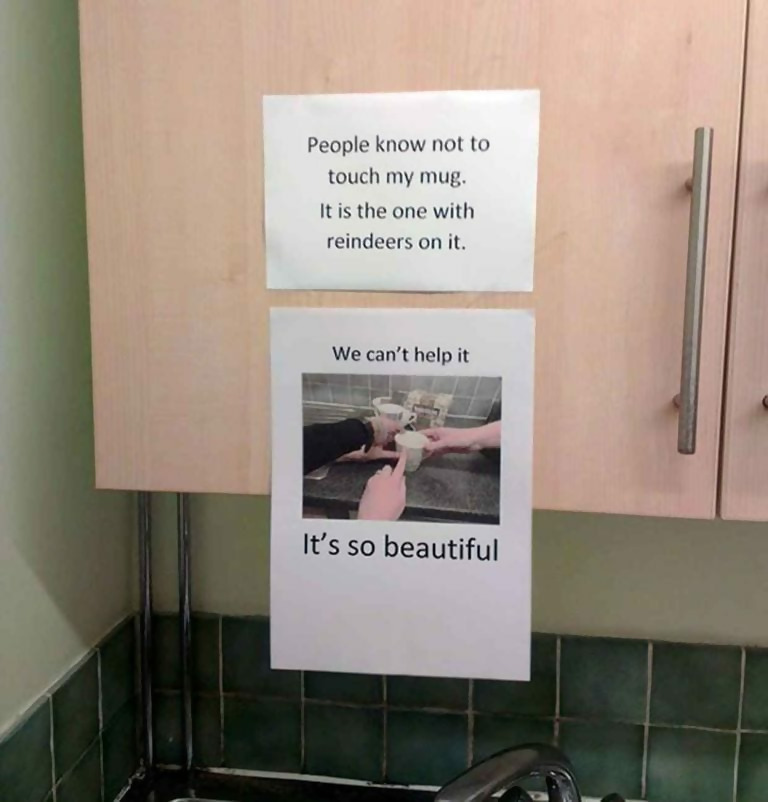 This employee has gotten pretty fed up about people touching his favorite mug. Hopefully he has a sense of humor because his coworkers’ reaction to his passive aggressive sign is hilarious. 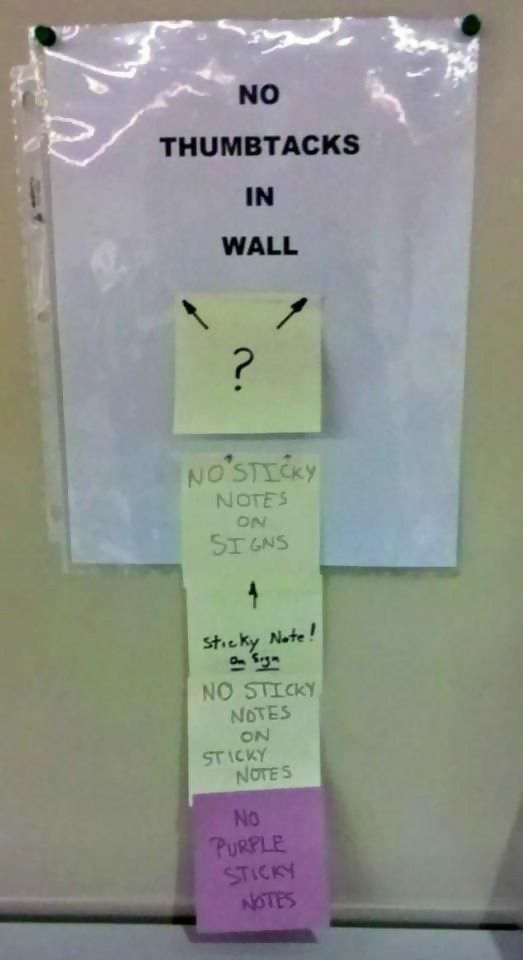 Sometimes you have to mess with the boss. When this boss made it clear to his employees that they cannot use thumbtacks in the wall but hung up his sign with thumbtacks, they decided to fire back in the best way possible. They showed him just how hypocritical he was being, but with sticky notes instead. 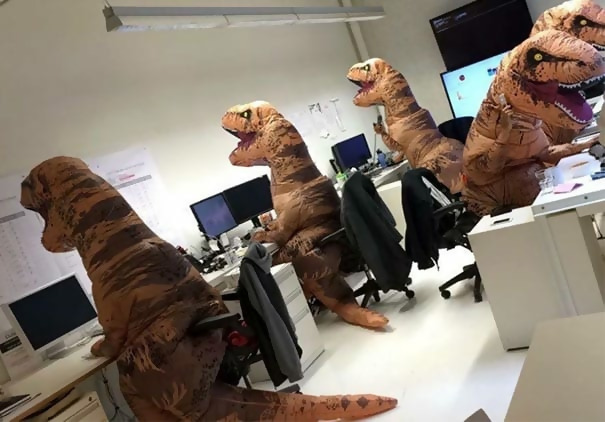 Happy April Fool’s Day! This department banded together and all pitched in for blow up dinosaur costumes. Then they came into work wearing the costumes and went throughout their day as normal. 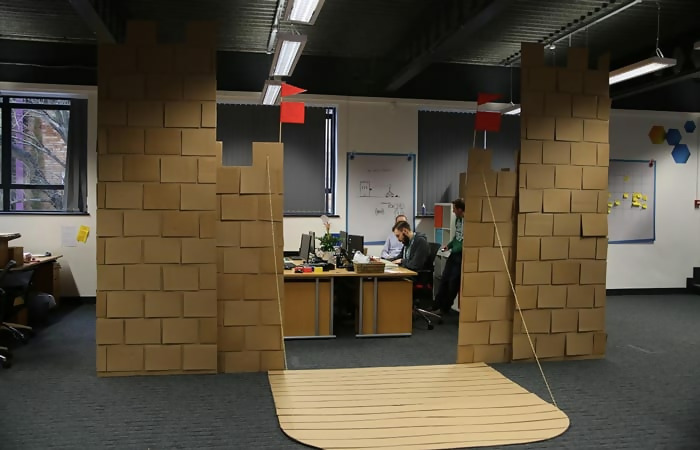 Some people dream of growing up to be a prince or princess. This guy made his childhood dream come true when he built himself a castle around his desk. He may not be treated like royalty, but now at least he looks the part. Kind of. 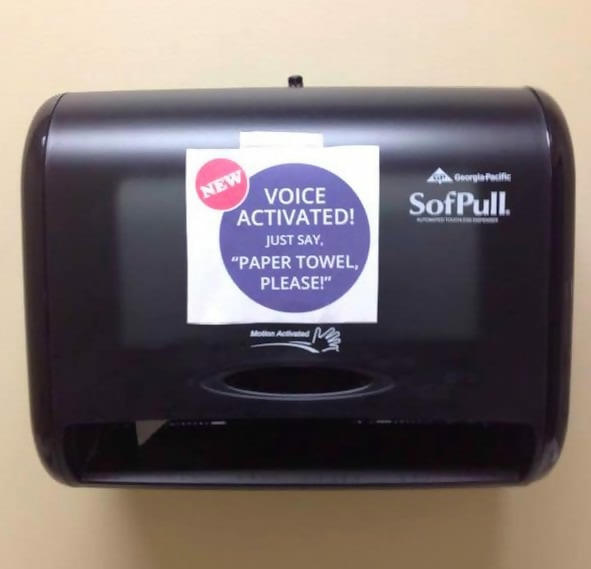 This office pulls an ongoing prank to new employees. They add signs to items saying that they are now voice activated. Then when the person says the command and nothing happens, everyone laughs watching them trying to figure it out.

Get Off My Lawn 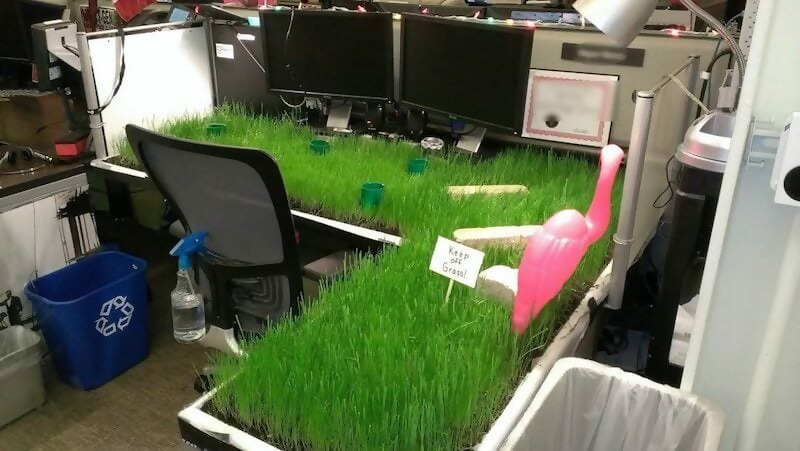 Plants and greenery are good for the mind and soul. This employee may have gone just a little too far with their office greenery, though. We do love the “Keep off Grass” sign though. 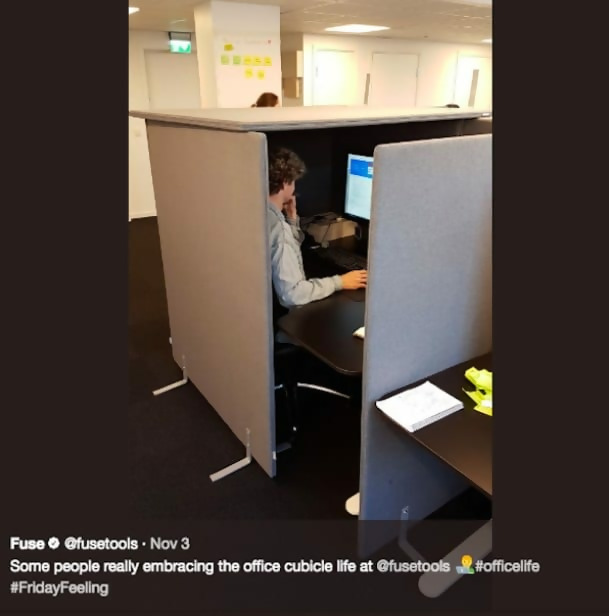 Some people hate cubicles. Others think they don’t provide enough privacy. This guy found ultimate privacy so he can actually focus on his work. 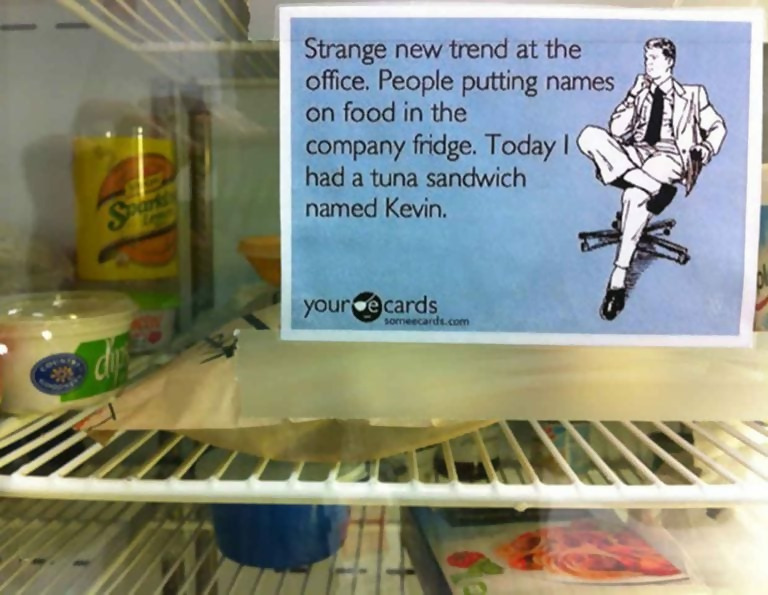 This coworker has absolutely no regard for other people’s food in the fridge. He even found a meme expressing his philosophy behind putting your name on food.