Excited Chimpanzee Is Reunited With The Man Who Raised Him

There is no greater happiness than being reunited with the people that raised you. And this baby chimp has the cutest reaction that has melted thousands of hearts in just a few days. The lovable chimp cannot hide his excitement as he sees his two human parents that fostered him.

And if you don’t believe us, wait until you see it for yourself in the photos below. Let’s find out who the baby chimp is. Meanwhile, get some tissues, because there will be some tears of happiness… 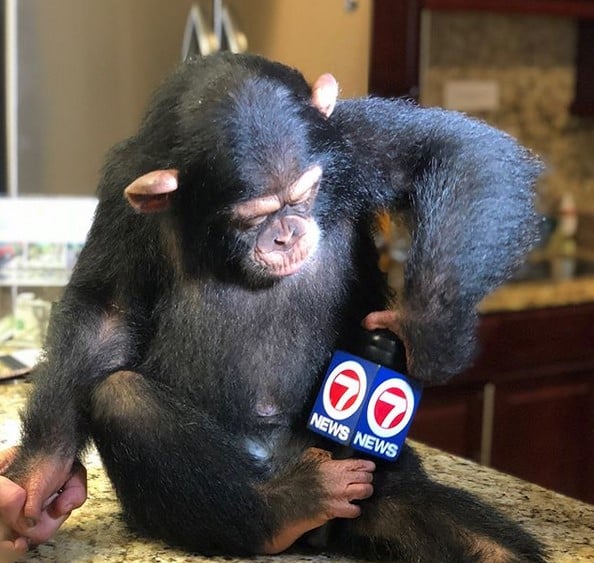 On their social media accounts, the Zoological Wildlife Foundation of Miami shared a video which soon became viral. It shows a baby chimp in diapers drinking his beverage through a straw. Then, he hears someone calling his name… 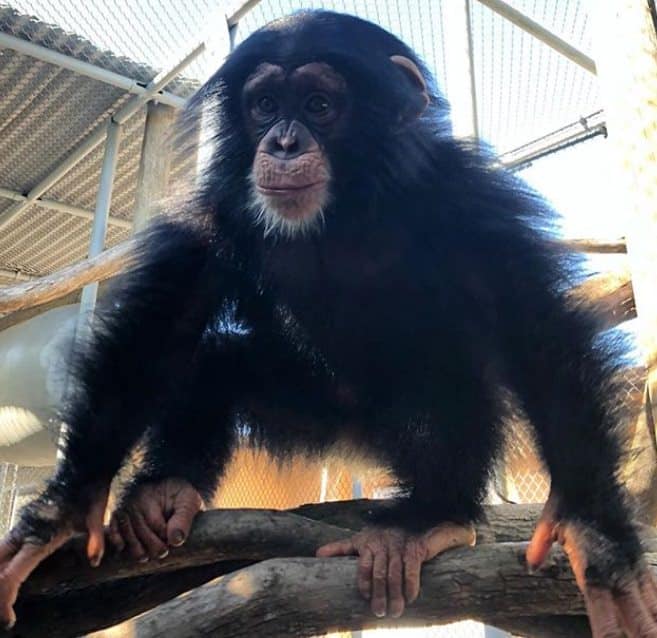 As the tiny ape hears ‘Limbani,’ he turns around only to find that it indeed is Jorge Sanchez, his foster father who came to visit him at the Wildlife Center. The baby chimp immediately put down his drink and starts ‘talking.’ 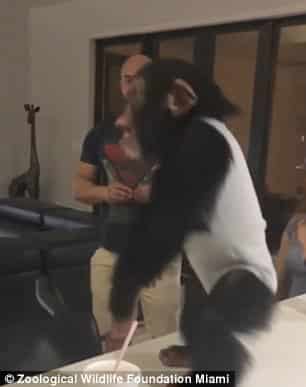 Of course, by talking, we mean screaming and making happy noises while jumping into his father’s arms. Limbani cannot contain his happiness as he wraps his arms and legs around the man into a loving embrace. Then, this happens… 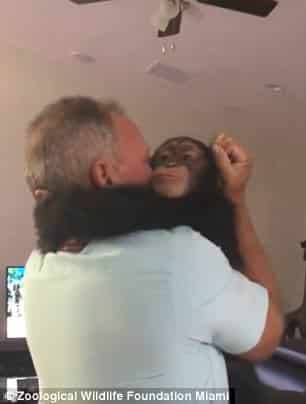 Jorge’s wife, Tania, walks into the room and Limbani lets out another excited sound as he jumps into her arms. In the video’s caption, the Foundation wrote: ‘The pure excitement and joy when Limbani sees our close friends can only be appreciated if watched and heard.’ 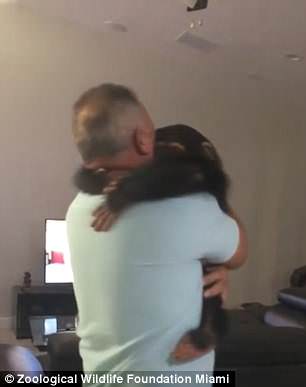 This ecstatic little chimp soon became famous after the video was uploaded on Instagram and on Facebook. It has gathered more than 170,000 views on Instagram and over 41,000 likes in just a few days. And that’s not even the best part! 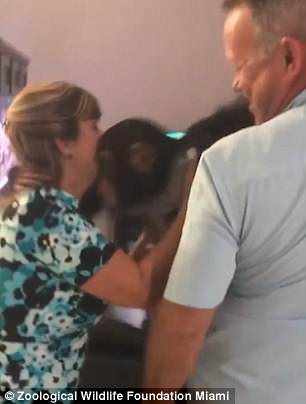 Limbani’s reunion with Tania and Jorge Sanchez echoes the great care the family had for the little chimp. ‘But how did he end living with humans?’ you might wonder. The Foundation explains Limbani’s sad beginning… 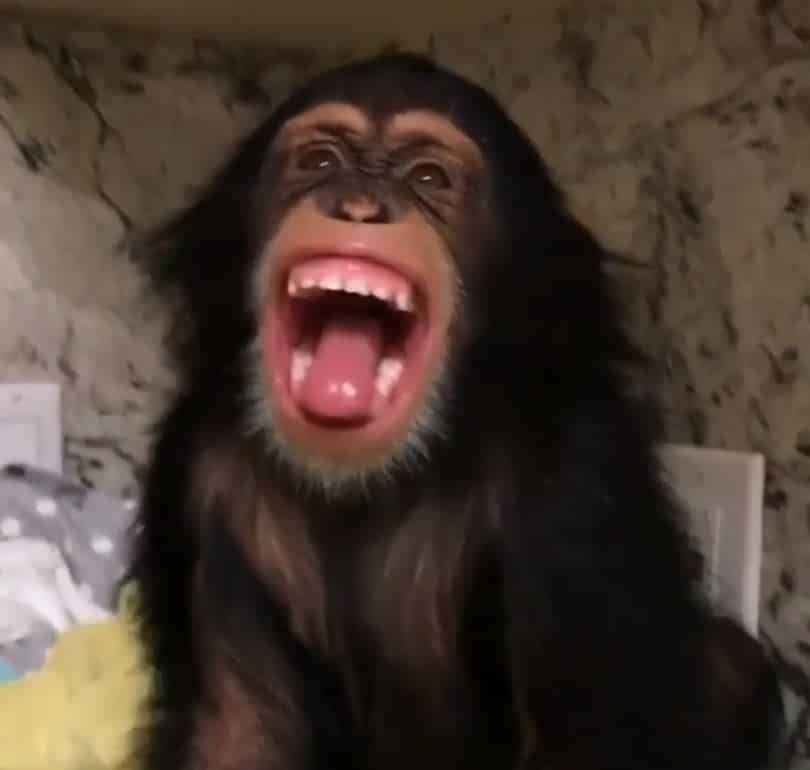 ‘Limbani, who was born with pneumonia was rejected by the mother,’ said the Foundation. They continue explaining that without intervention from vets, the little chimp wouldn’t have survived: ‘Without human intervention and modern medicine he wouldn’t be here today.’

13. Limbani Learned to Be Confident 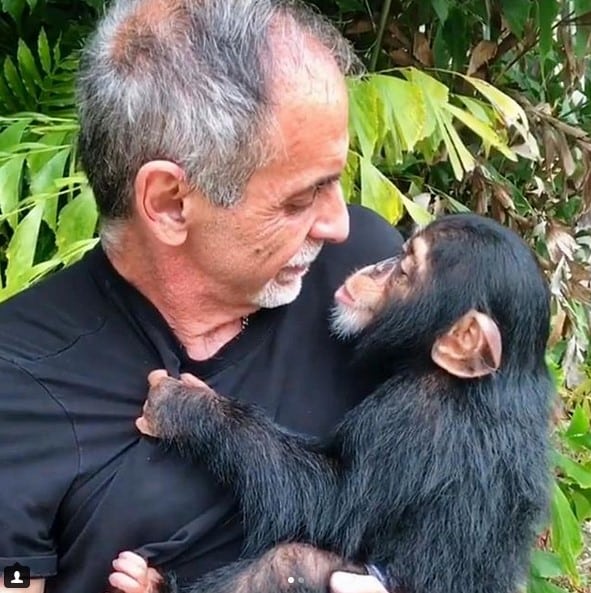 ‘While they were taking care of him, he had pneumonia,’ said president and director of ZWF Miami Mario Tabraue about the Sanchez family. They took Limbani to ‘doctors, he had to have his nebulizer two times a day, and they did it all, and he got very bonded with them.’ Now…

12. The Baby Chimp Lives at the ZWF 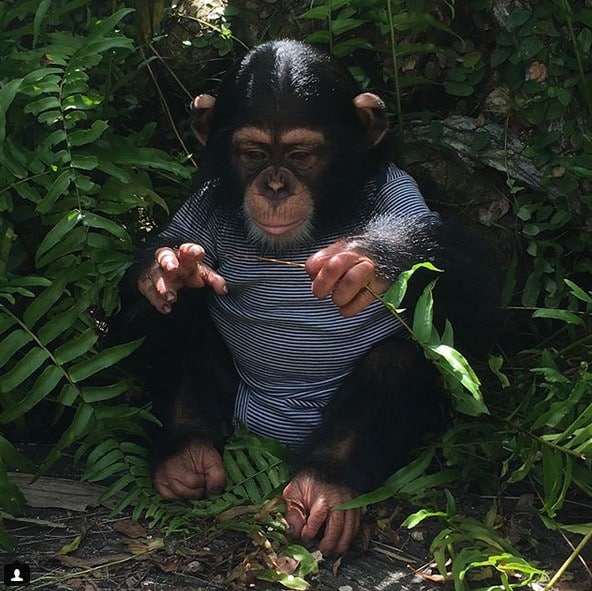 Limbani is now 22-months-old and has a new home with the Zoological Wildlife Foundation in Southwest Miami-Dade. He gets regular visits from the Sanchez family, and his reaction is as excited as always.

11. Tania Talked About The Moment 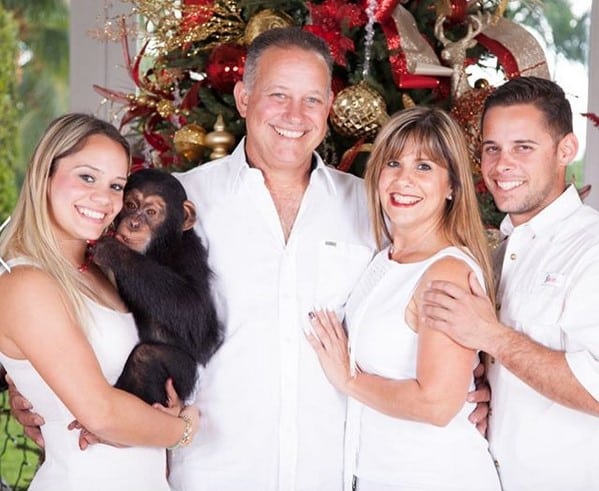 Tania Sanchez shared the video on her Instagram account, writing the following comment: ‘Definition of TRUE LOVE!!!!’ she also thanked the Foundation for letting her and her family be part of Limbani’s life. 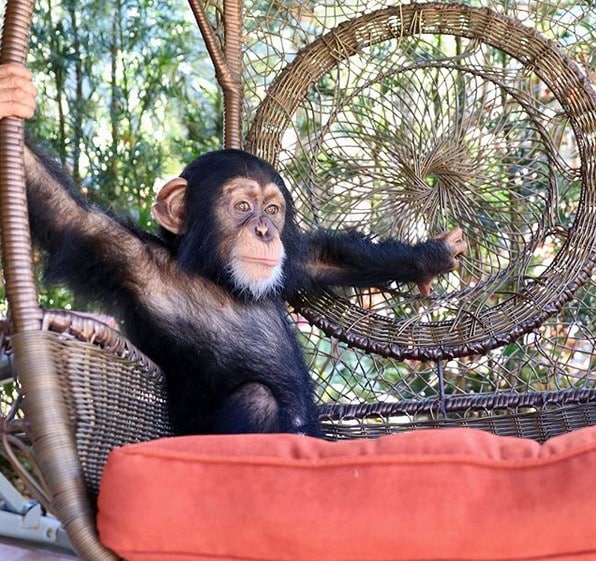 The ZWF Miami explains that chimps communicate with many vocalizations and facial gestures: ‘Chimps have expressive faces which are important in close-up communications.’ Here’s how they react if they’re afraid… 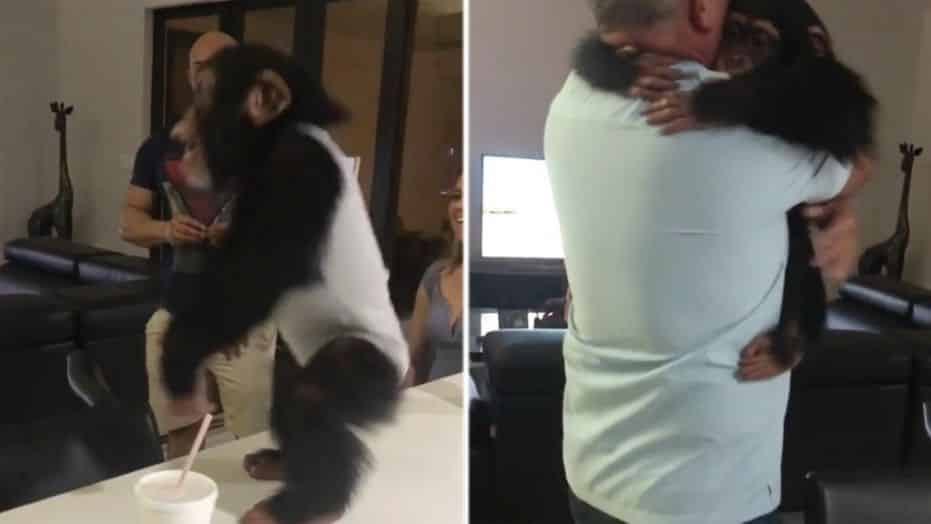 ‘When frightened, a full closed grin causes nearby individuals to be fearful, as well. Other facial expressions include the lip flip, pout, sneer, and compressed-lips face,’ added the Foundation. But in this photo, it’s obvious Limbani is a happy baby! 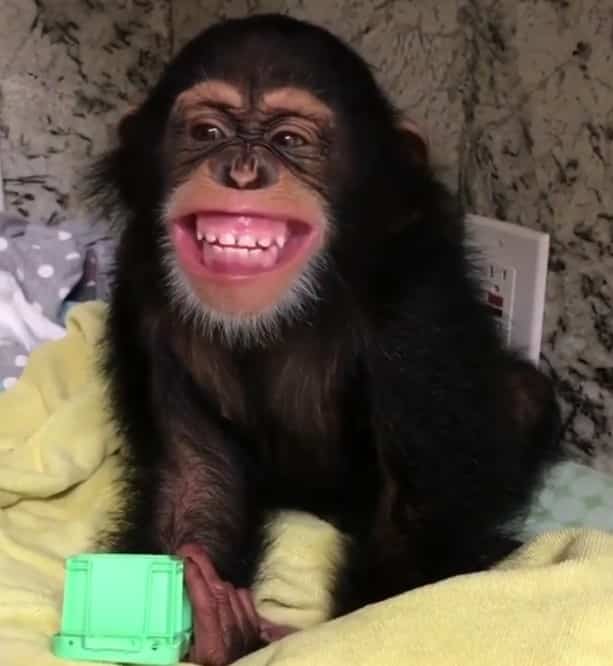 In this photo, Zoological Wildlife Foundation wrote that ‘after his bath, he gets a warm blow dry which he loves.’ This chimp is spoiled rotten! Wait until you see him in a car, chillin’ like a villain at #5! 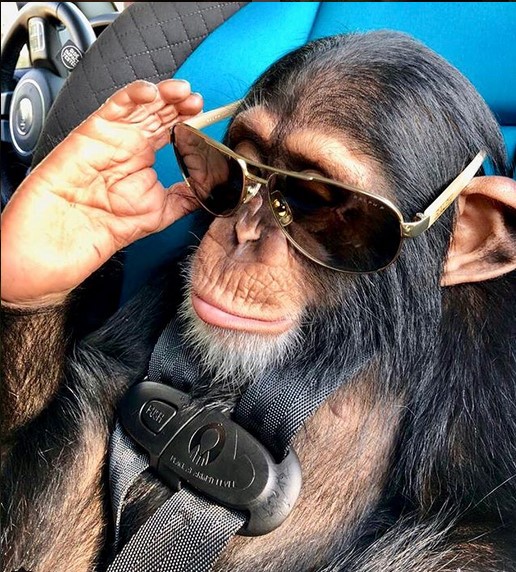 Limbani is a famous chimp on Instagram, and he attracts thousands of followers as he shows off his golden tabby friend Sara, the tiger cub. He has another friend he met at the Sanchez family, Bruno, the Mastiff dog. 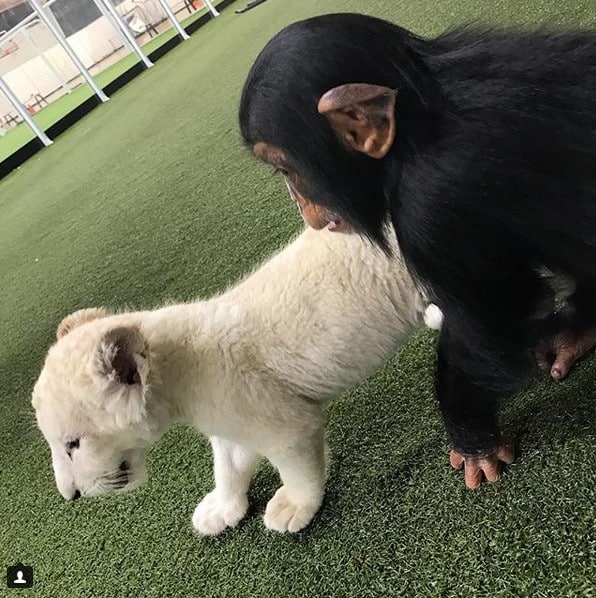 Limbani’s adorable photos and videos are shared with the public to raise awareness: ‘People should understand that not only this species but all species that we have are going extinct in the wild, and some people don’t care,’ said Tabraue. 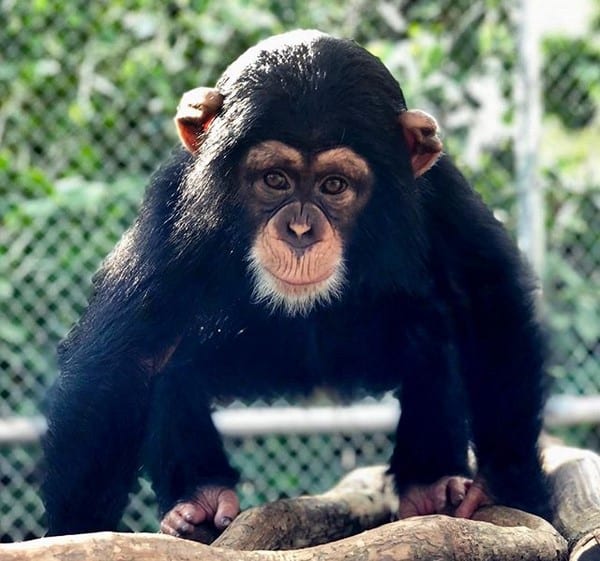 The co-founder of the ZWF concludes: ‘People think, ‘Let them go extinct.’ We believe they shouldn’t go extinct. We believe we should give them more attention and more love.’ However, some people don’t think ZWF’s intentions are real. 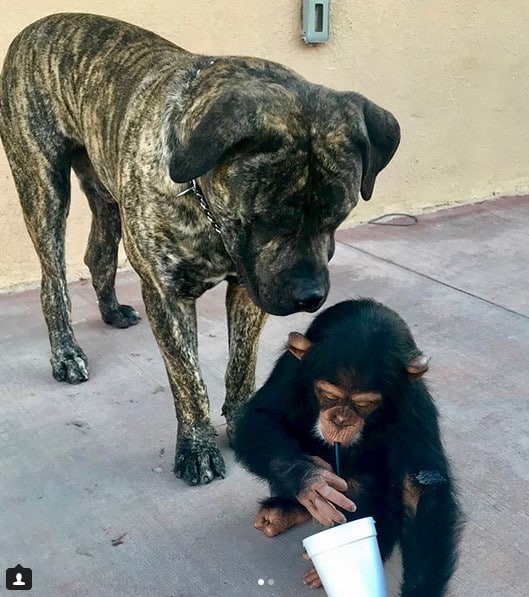 Many have signed petitions to force the Foundation close its doors and stop people from interacting with the wildlife. For one, visiting one of their animals for a selfie is very expensive. Here is what the petition sounds like, and it does make a point… 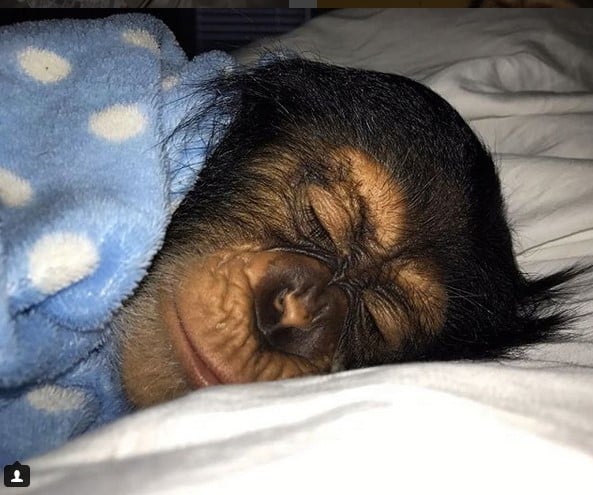 ‘By posting photos of Limbani dressed in cute baby clothes, ZWF is sending a message that chimps are not only cute but could make great pets, which is not the case.’ It goes on, explaining that baby chimp grows and can become dangerous. 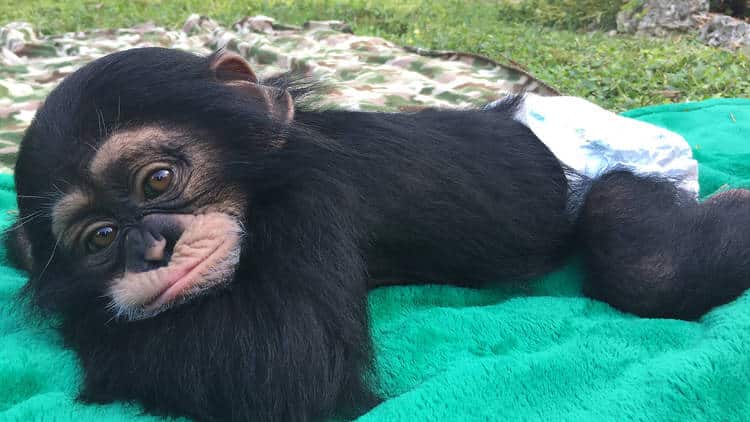 A question then arises: what will happen to Limbani as he grows? Where will he go? Will he be able to mingle with other chimps after so many years spent with humans? These are questions the foundation hasn’t yet answered.

1. He Should Live With Other Chimps 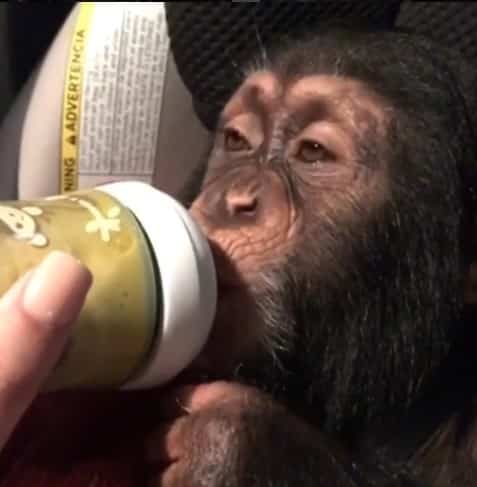