Our world is a strange place filled with mystery. Throughout the centuries archaeologists have uncovered a multitude of artifacts and sites that they still can’t fully understand to this day. How were the pyramids built? What was the true purpose of the Nazca lines? These are all questions that still swirl around professional circles.

Here are 20 archaeological finds that are still baffling researchers to this day. Why were they built or crafted? Read on to find out… 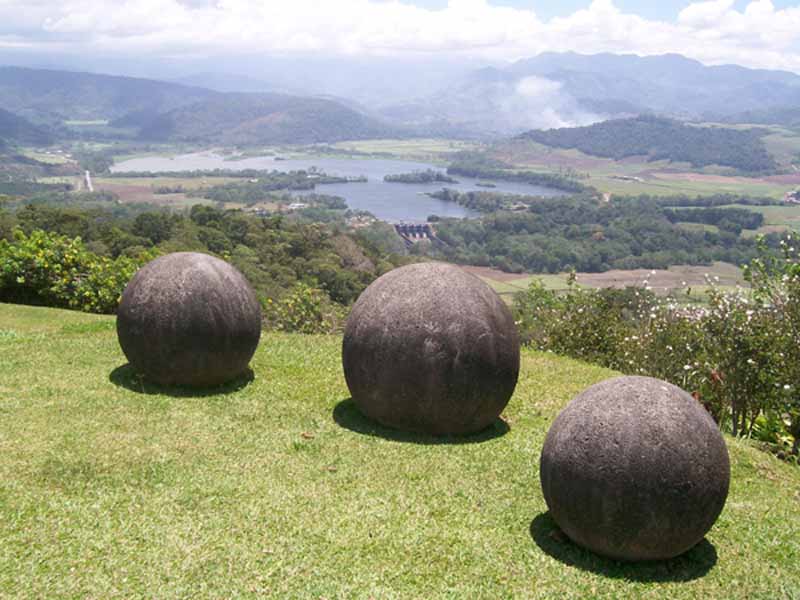 Located on the Disquis Delta on the Isla del Cano off the coast of Costa Rica, these stone petrospheres continue to puzzle archaeologists to this day. Some theorize they were placed in lines along the way to the homes of the tribe’s chiefs; however, their true nature remains unknown. There are over 300 of these spheres on the island, dating back over 1,000 years before the Spanish conquest. 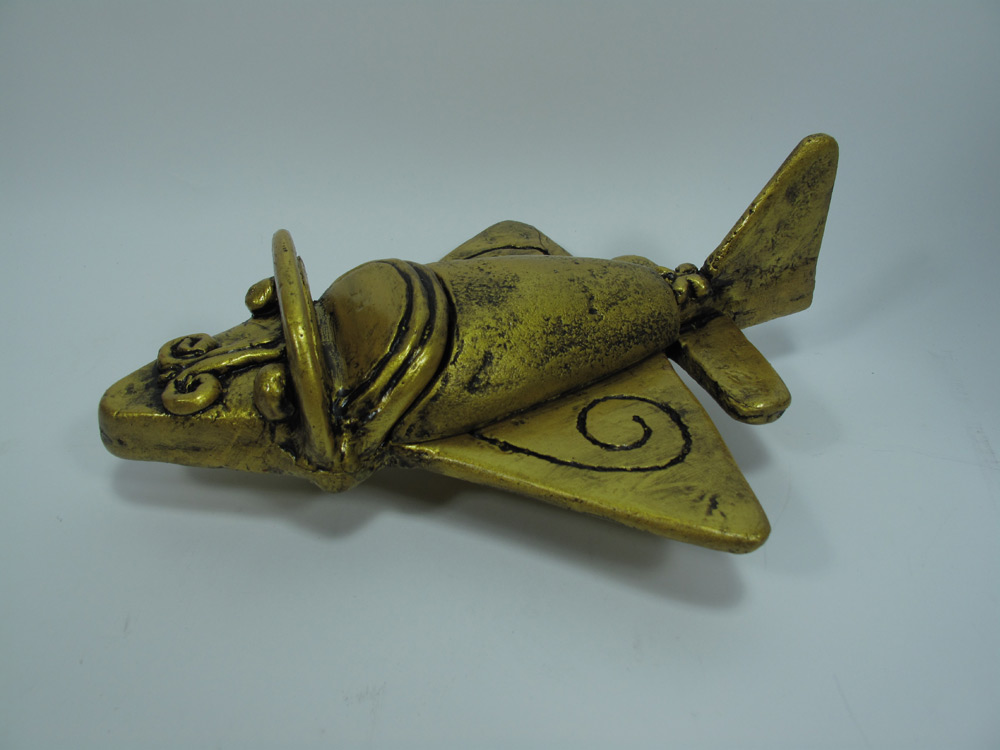 There are only a dozen or so of these golden objects dating back to 1000 CE. They are from the Quimbaya civilization and were discovered in Colombia. They were nicknamed “airplanes” due to their shape representing that of a modern airplane, with some designs depicting birds, lizards and other insects of that region. The artifacts are considered “out-of-place” due to their design representing something, not of that time period. Maybe the Quimbaya knew how to time travel? 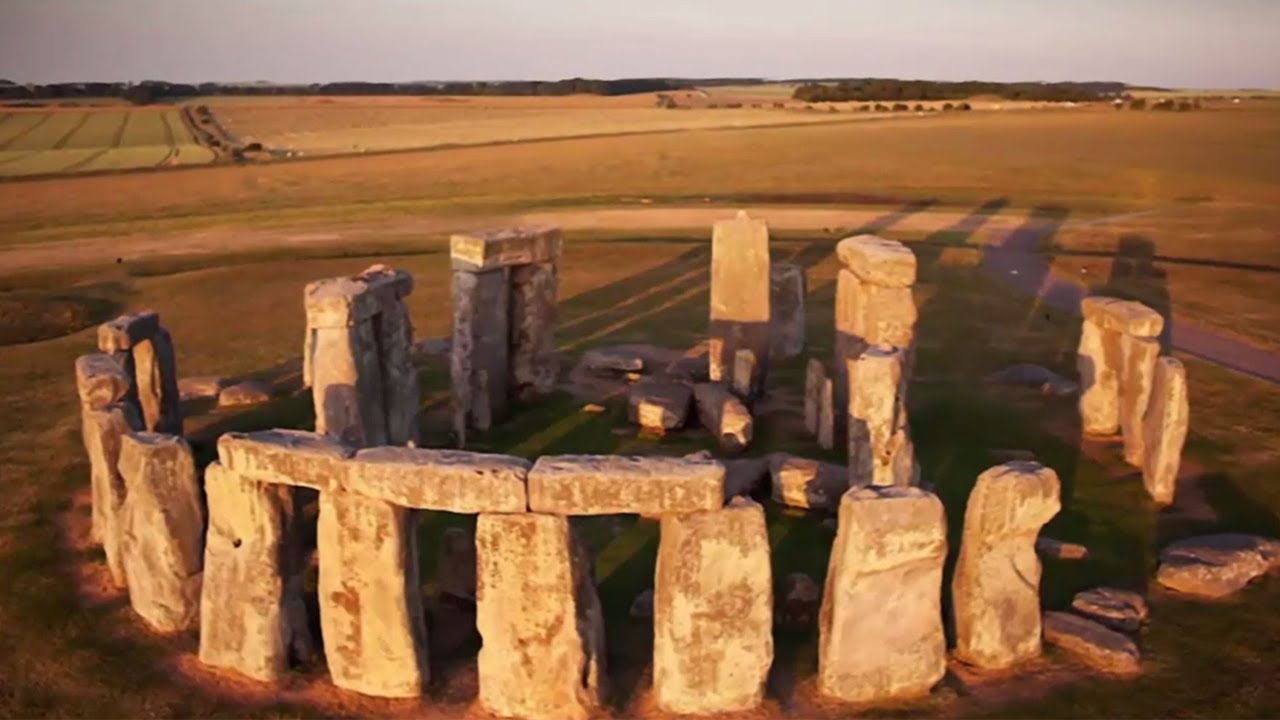 Located in Wiltshire, England, the Stonehenge monument attracts thousands of visitors annually. Consisting of a ring of standing stones that are over 13 feet tall and weighing over 25 tons, the iconic monument continues to stump researchers. It’s believed to have been constructed around 3000 BC and some theorize it could have been a burial ground originally. One of the more mysterious factors is how anyone would have been able to lift the heavy stones into place without any type of modern machinery. 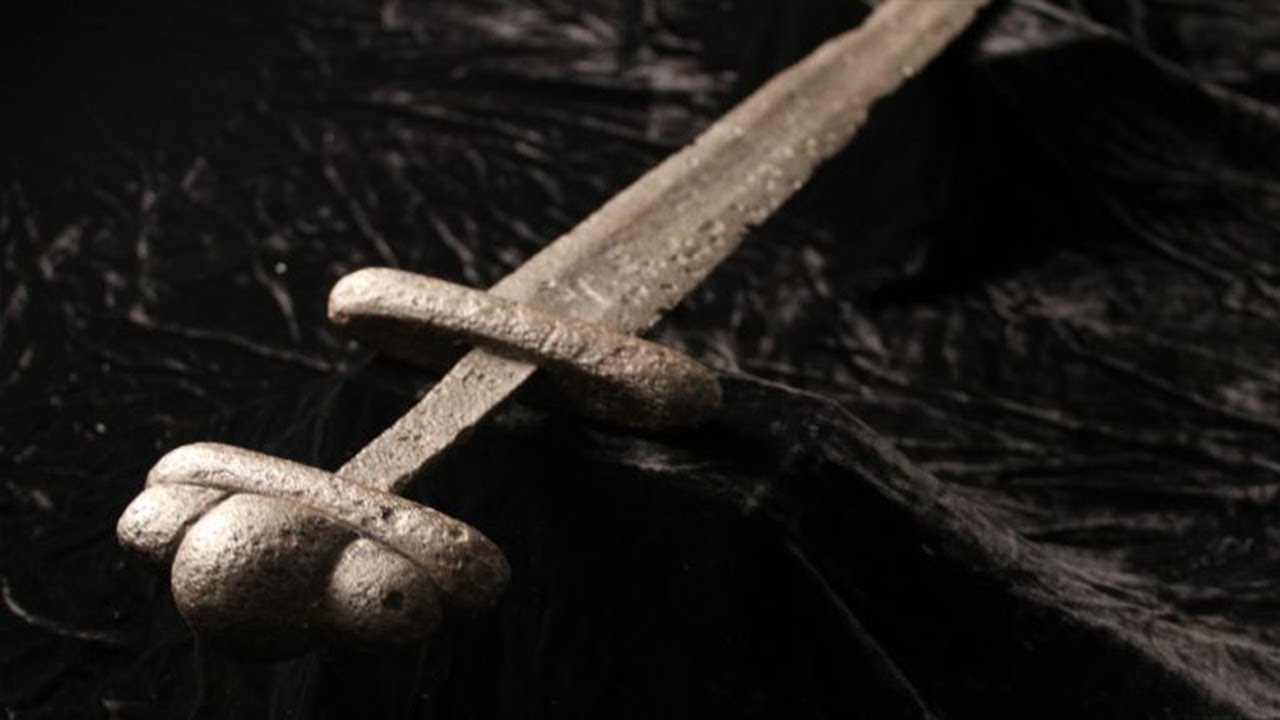 There are between 100 to 170 Ulfberht swords in the world, a group of medieval weaponry that is dated between the 9th and 11th centuries. Believed to be used by the Vikings due to the inscriptions on the blades, what’s unique about these swords is that they are numbered. Why were they created and for whom? We may never know. 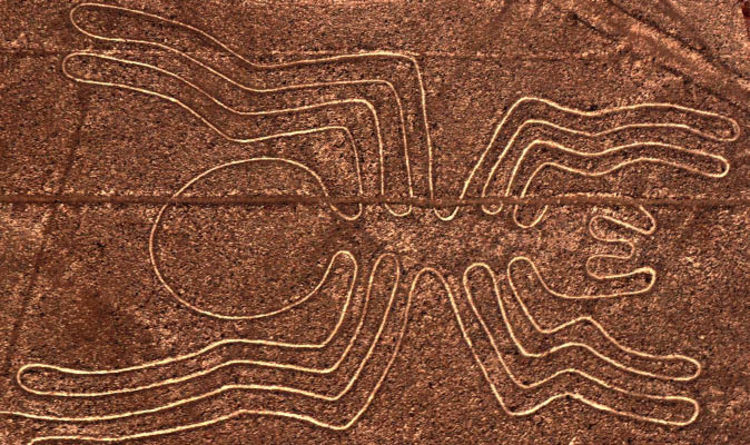 A large group of geoglyphs located in the Nazca Desert in Peru, these large and incredible designs were created around 500 BCE. The lines run across a large area of the landscape, depicting designs of animals and local plant life. What’s incredible is how complex the creations are, which has stumped researchers on how they were designed blind. Some believe the purpose of the designs revolved around ancient astrology and cosmology, acting as a rudimentary observatory. Others have hypothesized that the lines indicated water flow or irrigation plans for the region. 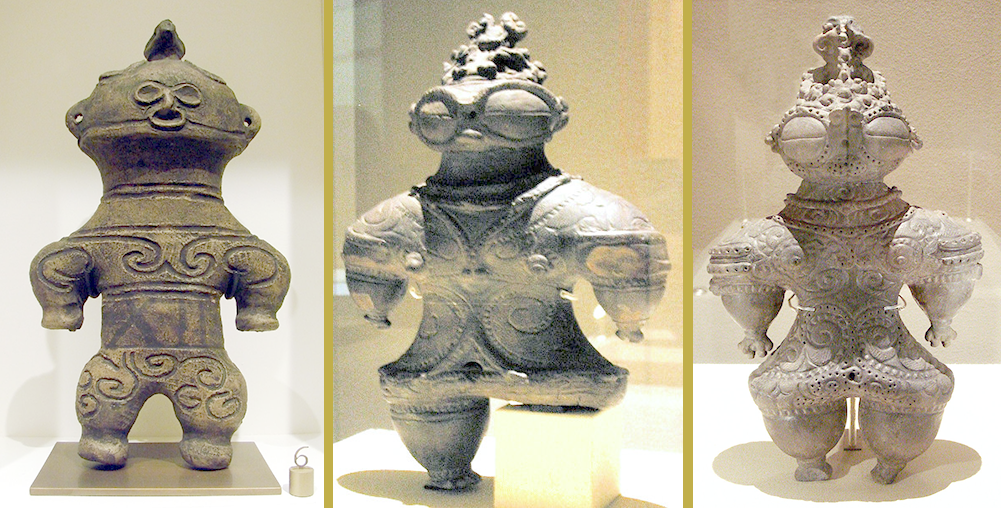 Believed to have been sculpted during the Jomon period between 3000-2000 BC, the dogu statues are known for their unique look depicting animals and humans. Most of these dogu figurines have been discovered in grave circles and stone circles, which has led archaeologists to believe they are of a spiritual nature. However, a true purpose for the figurines has yet to be officially determined. They are quite cute, don’t you think? 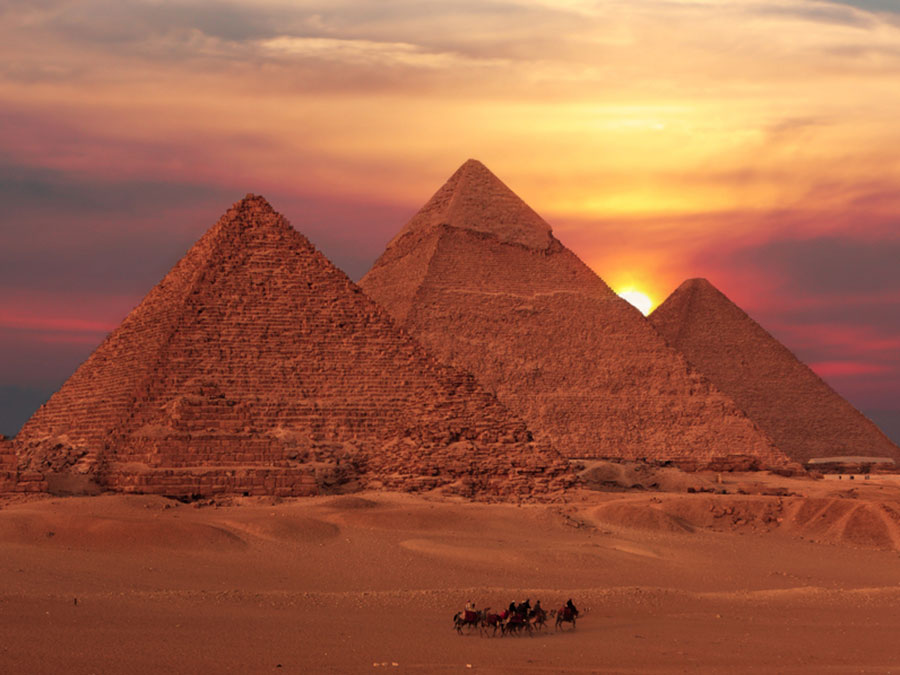 The Great Pyramids of Giza continue to be a marvel and attract tourists from around the globe on a yearly basis. No one is quite sure how the Egyptians managed to build the pyramids due to the large size of the stones and how they are stacked on top of one another. A popular theory is that an alien civilization assisted with constructing this Great Wonder of the World, mainly due to some hieroglyphs featuring “alien-like” beings and spaceships. Other historians assume the Israelites helped with the building. Today, it continues to be a mystery. 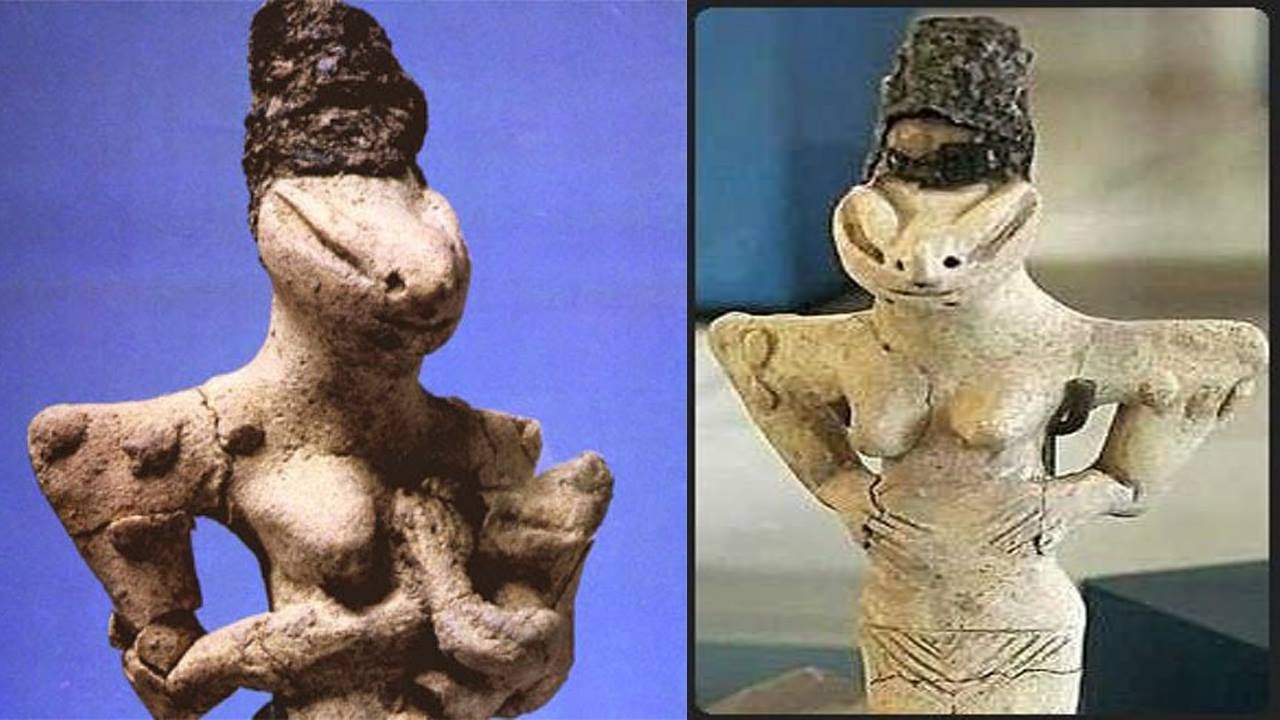 These 7,000-year-old sculptures continue to confound scientists from around the world. Discovered in an Al Ubaid archaeological site, the Ubaidian culture originated in Mesopotamia between 4000 and 5500 BC. The figurines were discovered by Harry Reginald Hal in 1919 and are designed to depict serpentine-like beings. Why were they made and for whom? It’s a mystery that continues to linger in the archaeological community to this day. 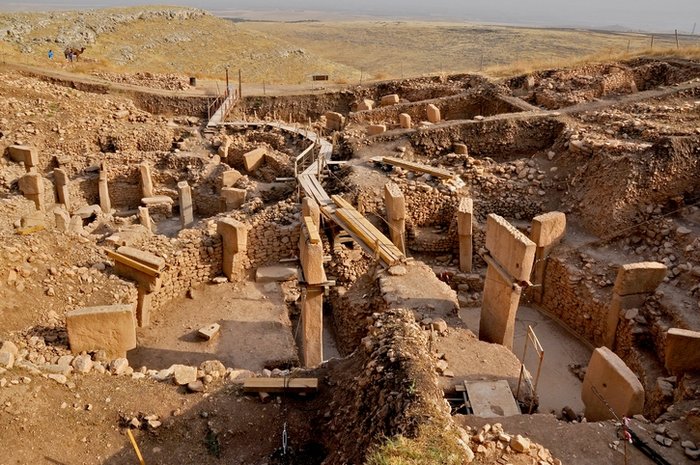 An incredible archaeological site in the Southeastern Anatolia Region of Turkey, it’s believed to be a place that held both social and ritual significance during the Neolithic time period. It’s known for the massive T-shaped stone pillars erected throughout the site, some of the largest in the world. Why the structure was built continues to remain a mystery. A German archaeological team excavated it in 1996, and the head of the team Klaus Schmidt believed up until his death that it was a sanctuary, not a settlement. 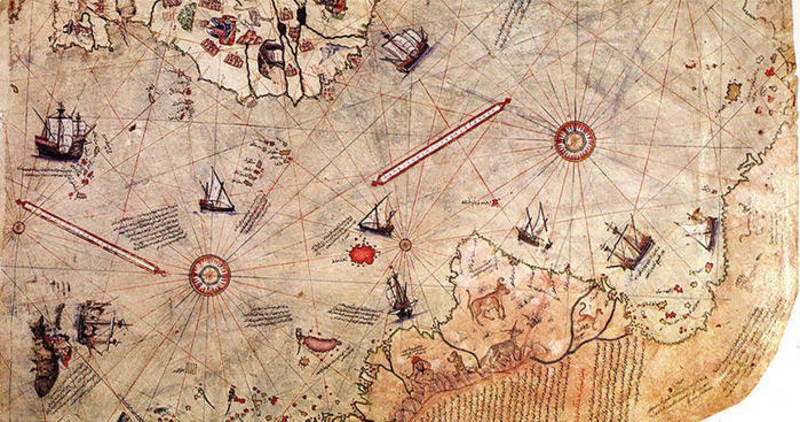 This world map was compiled in 1513 from military intel by Piri Reis, an Ottoman admiral. Only a third of the map exists today and shoes the coasts of Europe, North Africa, and Brazil. What’s amazing about the map is it shows how global exploration of the New World was progressing in the 16th century. Some believe the map was designed from the ledgers of Christopher Columbus. The artifact was discovered in 1929 by a German theologian, but its purpose is still unknown. Why Piri Reis needed a map of the world is still a question historians ponder. 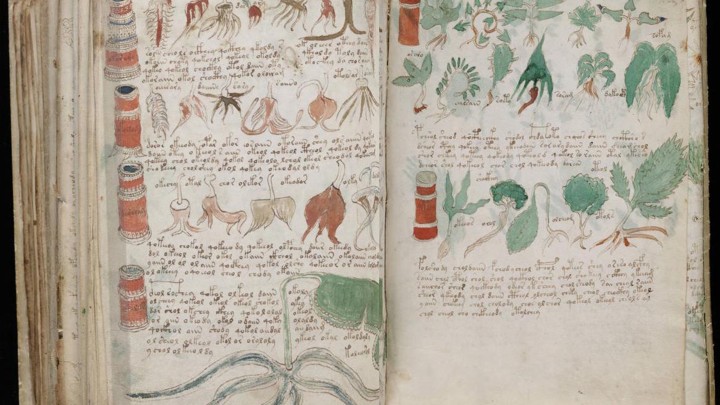 This hand-written and illustrated codex features an unknown writing system from the 15th century that continues to stump history experts. It’s believed to have been created in Northern Italy during the Italian Renaissance and is named after a book dealer who purchased it back in 1912. Studied by numerous cryptographers from around the world, the meaning of the language and the book’s purpose continues to excite those in the field. Many believe that it was meant to be a guide to medieval or early modern medicine due to the detailed drawings of various plants with complex descriptions.

The Shroud of Turin 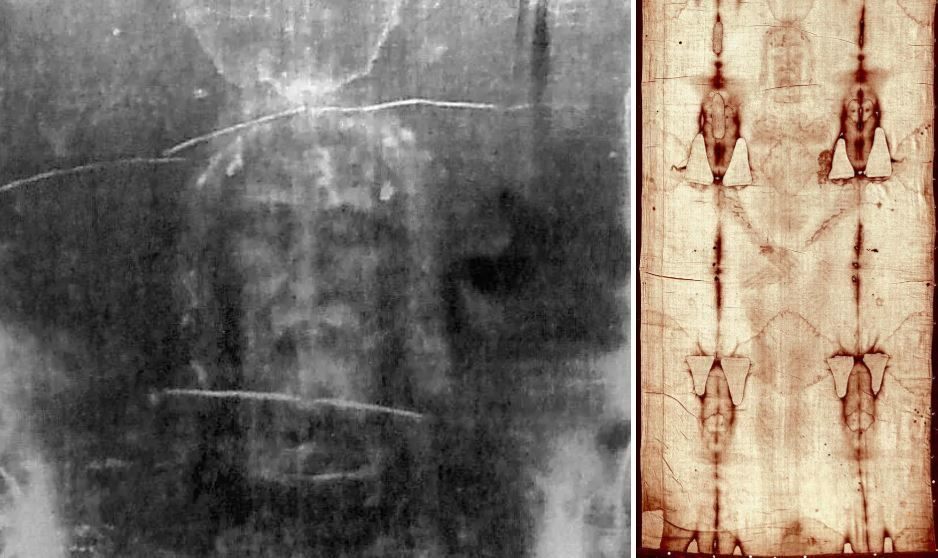 The Shroud of Turin is a piece of linen that bears the image of Jesus of Nazareth. It’s kept in the Chapel of the Holy Shroud in northern Italy and many believe it’s the burial shroud of Jesus after his death by crucifixion. Throughout the years, experts and religious leaders have denounced the shroud as a fake, but there are still some who believe it could possibly be real. We may never know. 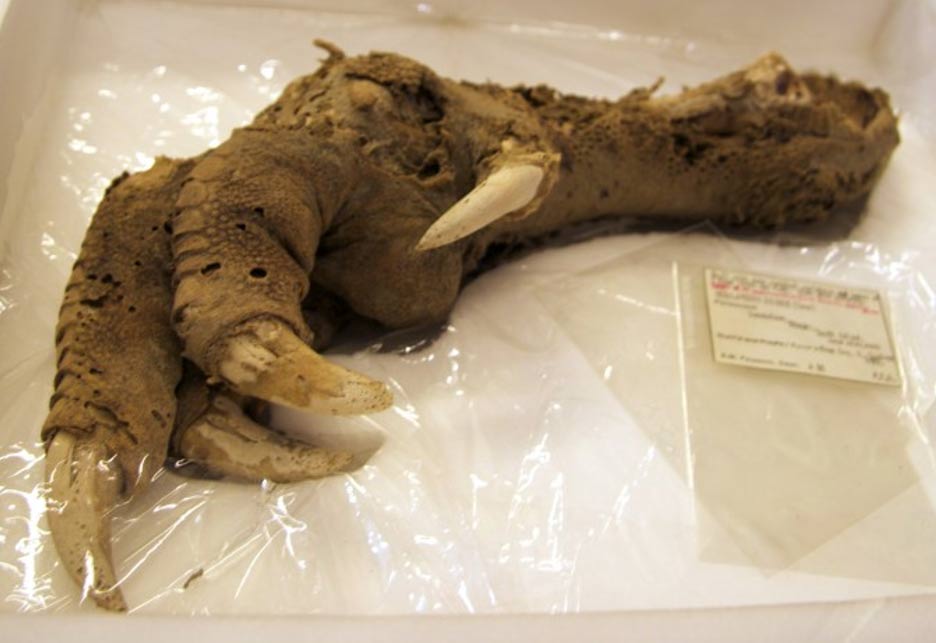 This incredible find was discovered in a network of caves in Mount Owen in New Zealand. Perfectly preserved, this claw belonged to an extinct bird known as the Moa. A fearsome predator due to its inability to fly, these claws could do some real damage if another animal got in its way. To this day, no one knows how the claw remained in such incredible shape for so long. We can only hope no one decides to try cloning one. 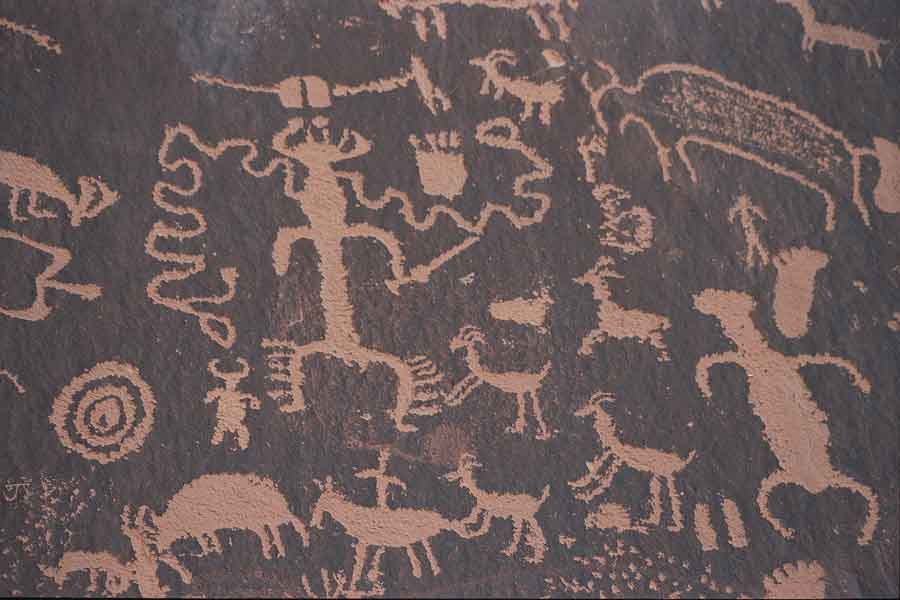 Native American petroglyphs can be found around the United States, but most prominently in Arizona. Ancient drawings depicting animals, rituals, and symbols, no one really knows what they were used for. Some believe they were drawn by young Natives who were on vision quests as part of their ritual to becoming a “man.” Others believe it could be a way of preserving stories and the history of the tribes that lived here so long ago. 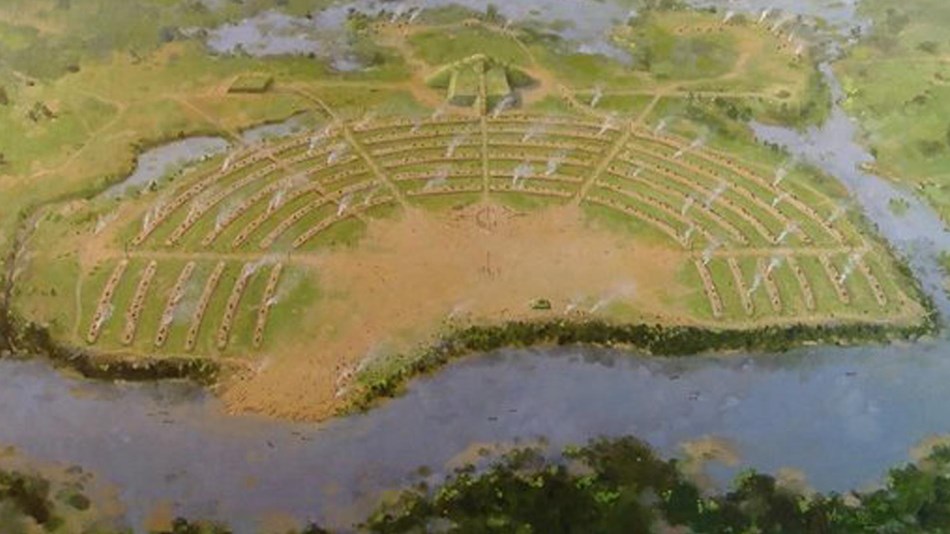 Located in northeastern Louisiana, this prehistoric earthwork was built by the Poverty Point culture. Containing ridges and mounds, built by American Indians between 1700 and 1100 BC, no one truly knows the function of the historical site. Some believed it was a settlement, while others have theorized it was a trading center or religious complex. Unfortunately, we may never know its true purpose. Today, the 402-acre property is operated as a historical site and has been the home of professional archaeological excavations since the 1950s. 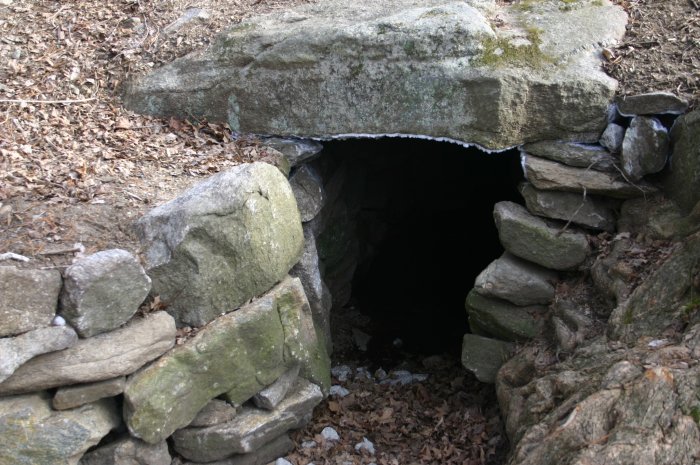 The Upton Chamber Cave is one of many ancient stone chambers across New England. Considered one of the most famous, this cave was discovered in the hills outside of Boston, Massachusetts. With a 14-foot entrance and a dome that rises to roughly 12-feet, it’s considered one of the largest beehive chambers. No one knows why the chamber was created, but it has been determined it is astronomically aligned, so it could have something to do with ancient astronomy. 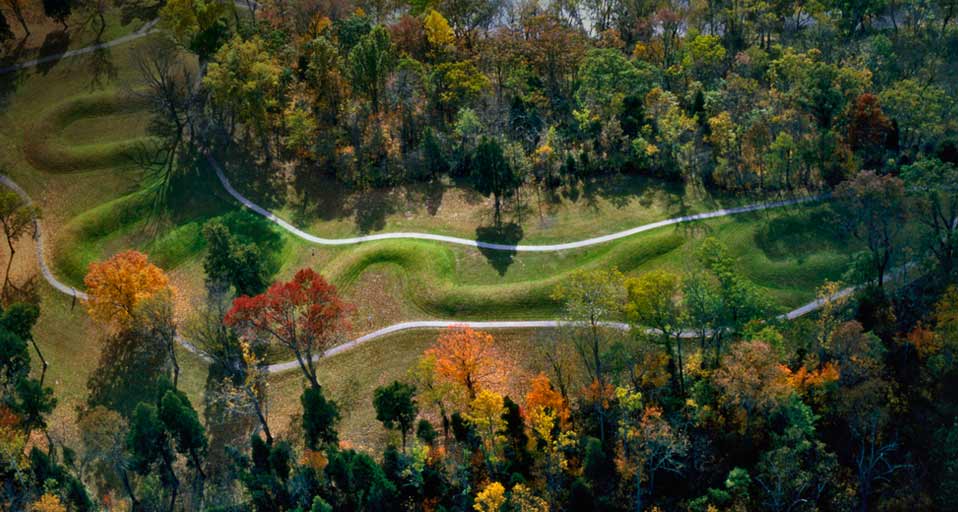 Best Photos of the World

A prehistoric effigy mound located in Ohio Brush Creek, this incredible site is over 1,348 feet long and in the shape of a serpent. Carbon dating has led scholars to believe that it was built by the Fort Ancient culture around 1070 CE and that it has been repaired and restored by Native Americans throughout the centuries. It’s believed to have astronomical significance due to the head of the serpent being aligned with the summer solstice sunset, but its true purpose remains a mystery.

Not much is known about Cahokia, a pre-Columbian Native American city that’s directly across the Mississippi River from St. Louis. It’s believed during its peak, the city covered about six square miles and was one of the largest urban settlements in the area. Excavations of the site have revealed that multiple ethnic groups most likely settled in the mounds and that it helped foster an agricultural revolution with crops of maize, beans, gourds, and squash. Eventually, the city declined and was abandoned, though no one knows why. 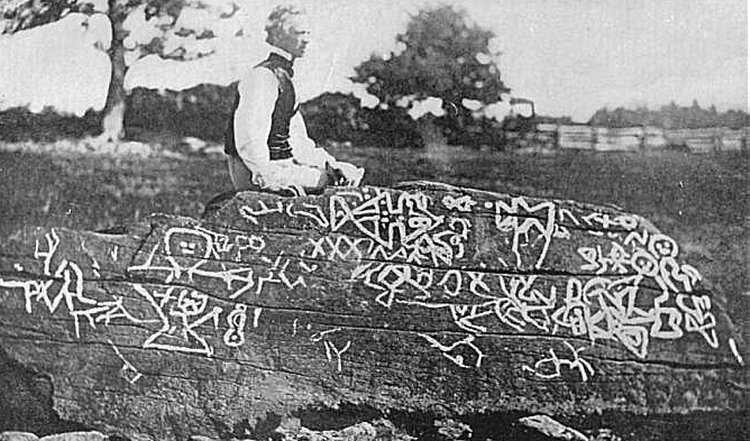 Dighton Rick is a 40-ton boulder that was discovered in the Taunton River in Berkley, Massachusetts. It’s most known for the petroglyphs scrawled on its surface with designs from an ancient yet unknown origin. It was first discovered in 1680 by English colonist John Danforth, and since then has been studied by prominent historians. No one knows the rock’s true purpose or the meanings behind the petroglyphs but it’s still a topic of debate among the archaeological community. 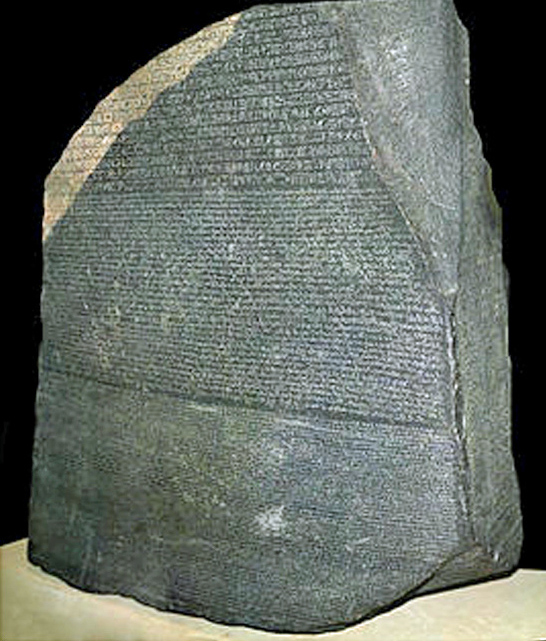 No, we’re not talking about the popular language learning program! The Rosetta Stone is a large fragment of granodiorite with three versions of a decree that was issued in Memphis, Egypt during the Ptolemaic dynasty. The texts included on the stone slab are Ancient Egyptian, Green, and Demotic script. One aspect of the stone that confounds archaeologists is that it’s incomplete, missing its top piece. What used to be there? No one really knows. And what the decree was for? That still remains a mystery as well.