After A Life Of Abuse, Lonely Bears Meet At A Sanctuary And Fall In Love

The love story between Tomi and Hope is even more incredible as you learn about their past. They are among the many caged bears in Albania that have been rescued with the help of animal rescue organization Four Paws.

Tomi’s story began in 2015. He was one of the first bears to be released from his cage. Now Tomi is free at a sanctuary, and he has recently found true love! 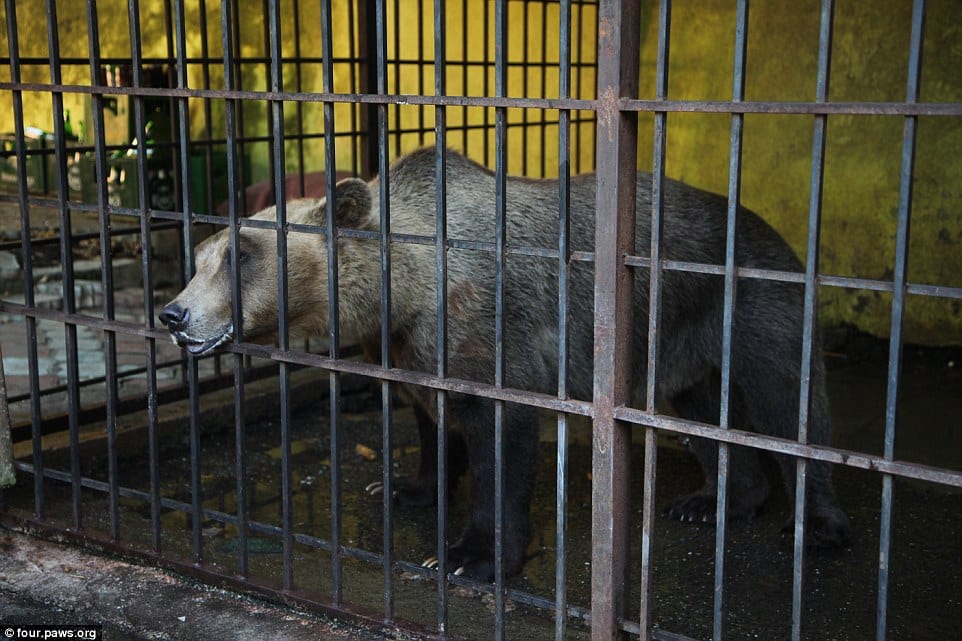 An animal rescue organization Four Paws found out about captive bears in Albania. Tomi was one of them. He lived inside a cage next to a restaurant. The owner kept the bear for the entertainment of his guests, feeding him bread and giving him beer… 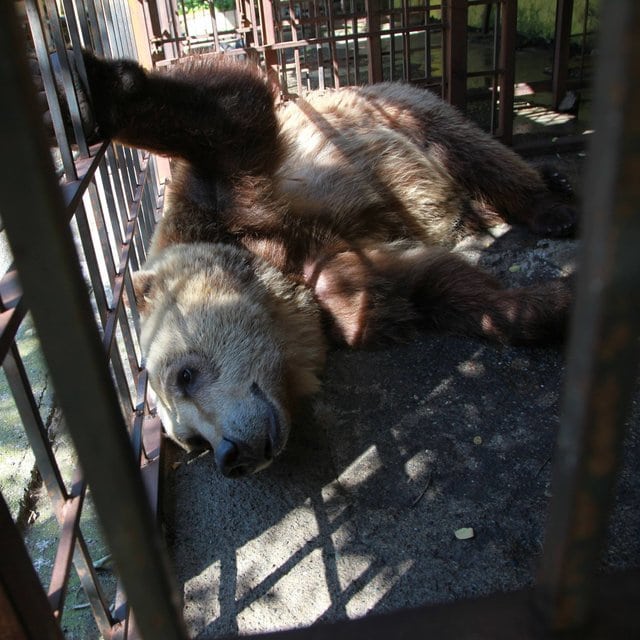 Four Paws reached out and asked the owner of the restaurant to release Tomi, as they were willing to find the bear a proper home. This is what the communications director for Four Paws said about Tomi’s past. 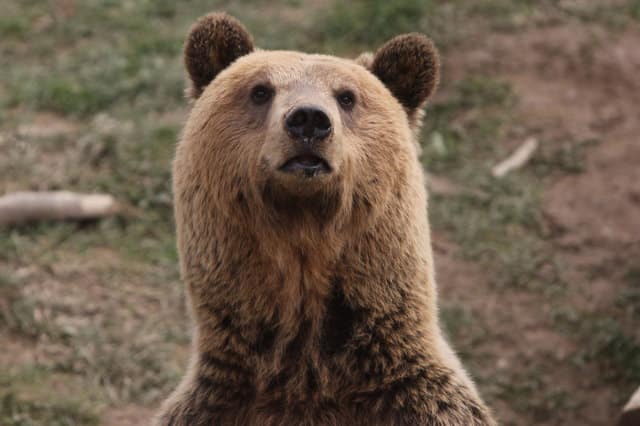 ‘We assume that Tomi was caught in the wild as a cub and had been living in the squalid conditions for roughly two years before we rescued him,’ said Claire LaFrance. But he would soon find out that life isn’t that grim. 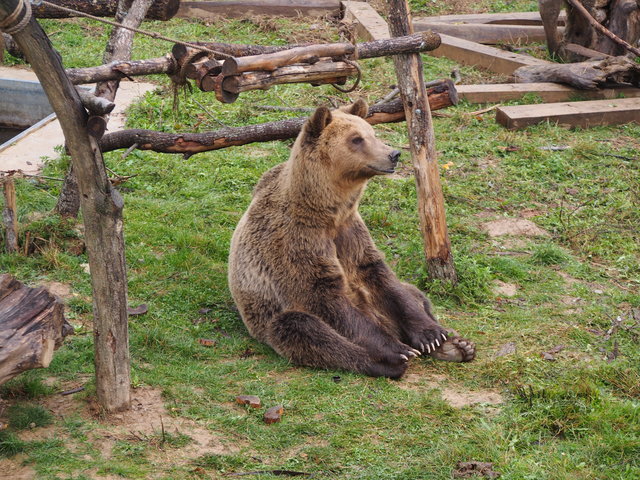 The bear expert at the Four Paws, Carsten Hertwig, explained that they were ready to welcome Tomi and that they had a great bear sanctuary for him: ‘he’ll receive first-class veterinary care and be able to live a life fit for a bear…’ 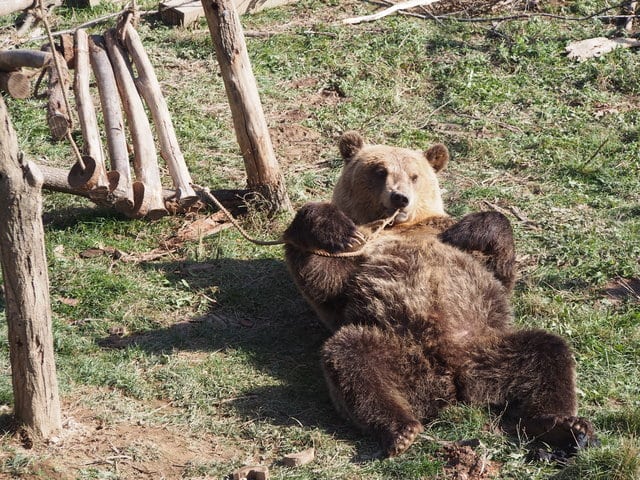 Carsten explained that the bear sanctuary Prishtina has a ‘large enclosure providing a habitat much closer to his natural environment, with grass, trees, and activities to keep him busy.’ And Tomi was indeed happy at the sanctuary! And then something incredible happened. 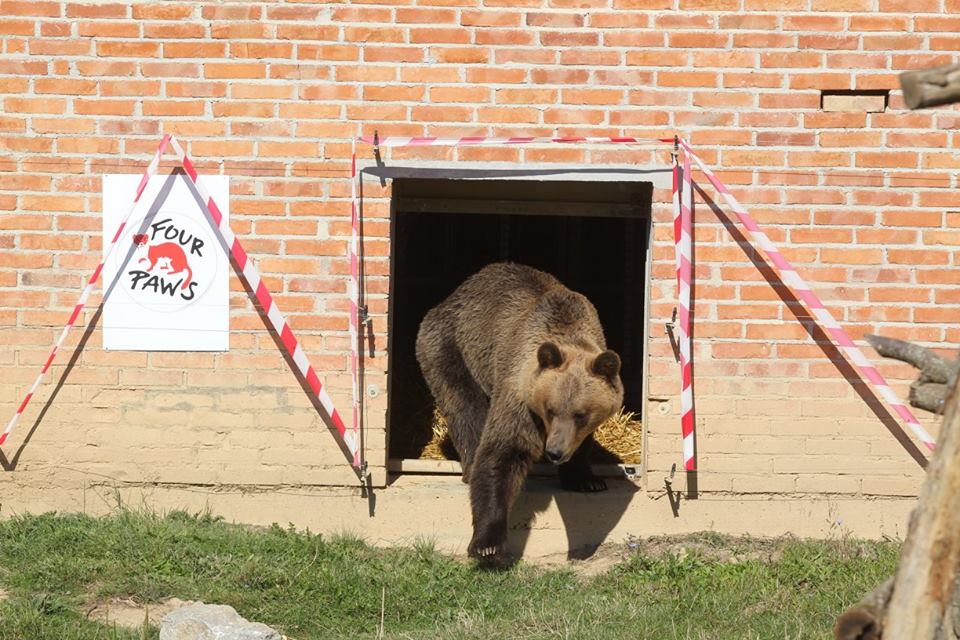 As soon as he arrived at the Four Paws Sanctuary in Kosovo, Tomi blossomed! He made his first steps on real grass for the first time in his life, and he learned that baths are fantastic. Tomi has changed a lot since he was first found in his cage…

14. The Bear Has His Habits 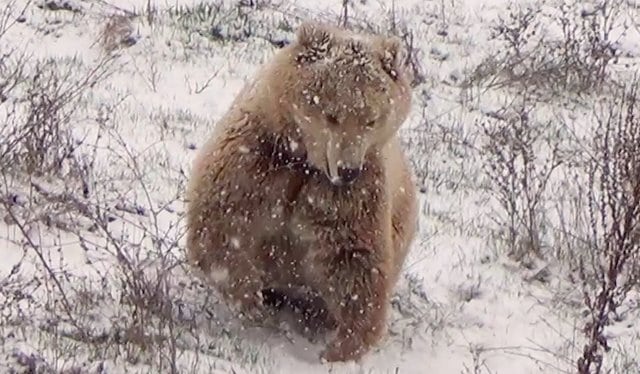 In summer, Tomi loved to swim in his pool and roll in the grass. It was all so relaxing, and he had nothing to worry about. In the winter, he discovered that playing in the snow is fun too. Tomi was the happiest bear alive! 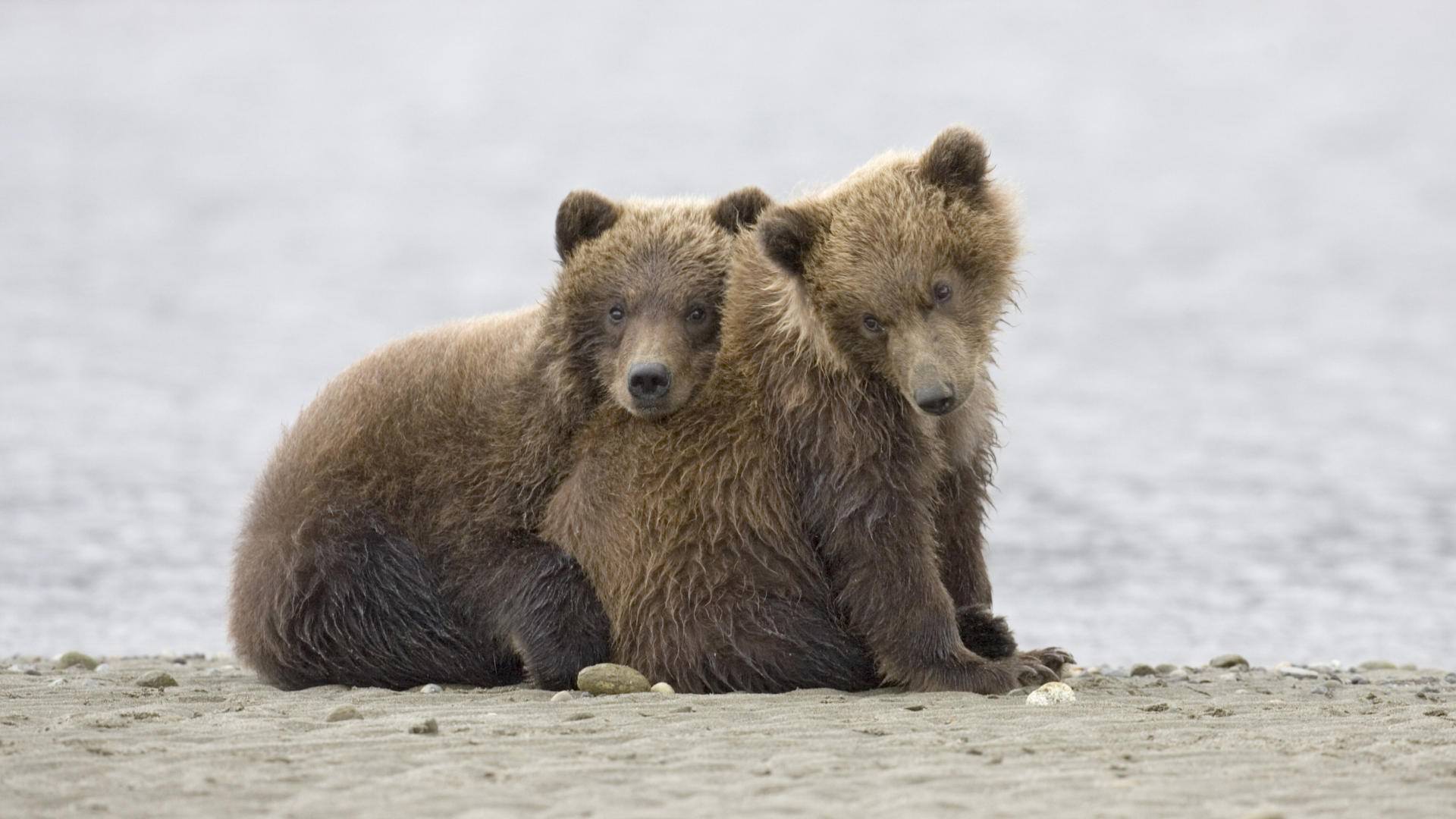 But then, the staff at Four Paws International thought that maybe Tomi would get lonely all alone in his huge enclosure. So, they slowly trained him to be more social and then introduced him to a female bear named Hope. 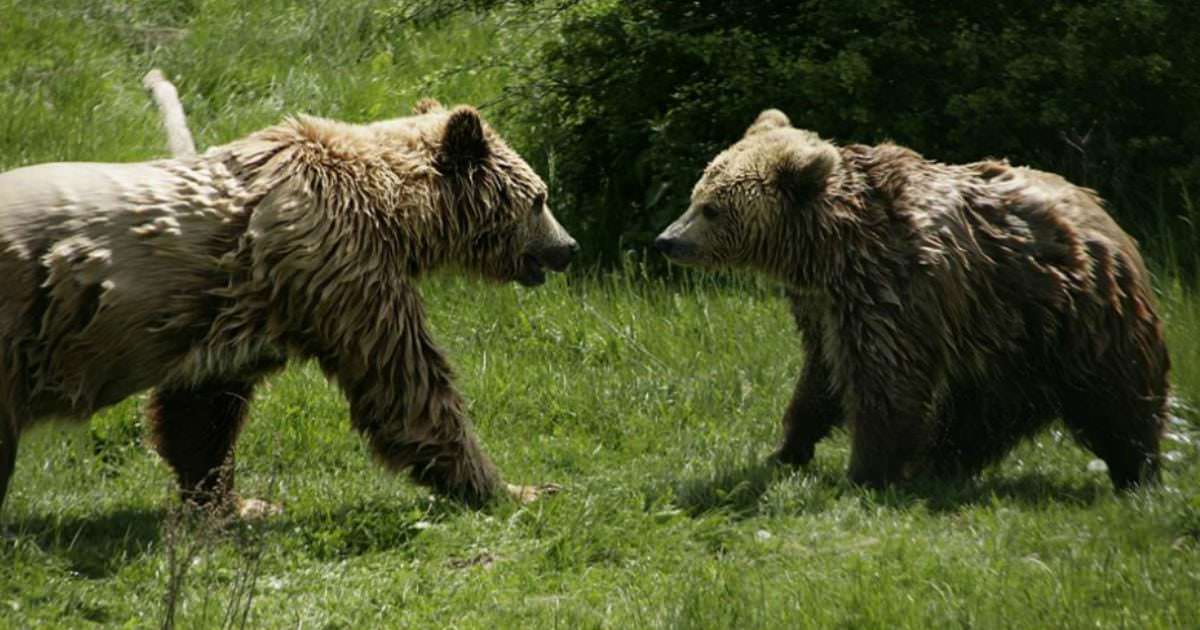 Just like Tomi, Hope was also a rescued bear. She lived in a cage outside an Albanian restaurant until she was released. She would soon meet Tomi, who had no idea how much better life could get! 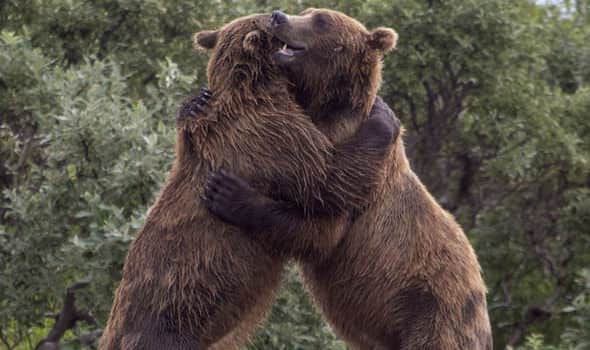 Hope was a little younger than Tomi and shyer, but under the watchful eyes of the staff at the Four Paws, they greeted each other. This is what Four Paws wrote on their Facebook page. Our hearts are completely melted!

10. The Beginning of a Friendship 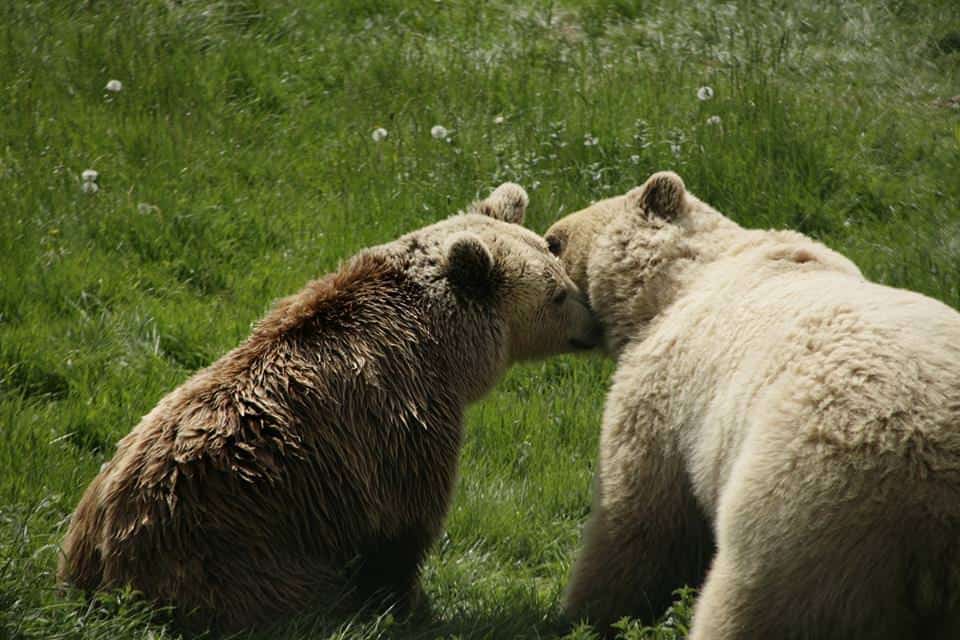 The two bears that lived alone finally started to bond. ‘Tomi and Hope’s socialization started,’ wrote the rescue on social media. By having the bears spend time together, the staff believed Hope would get out of her shell. 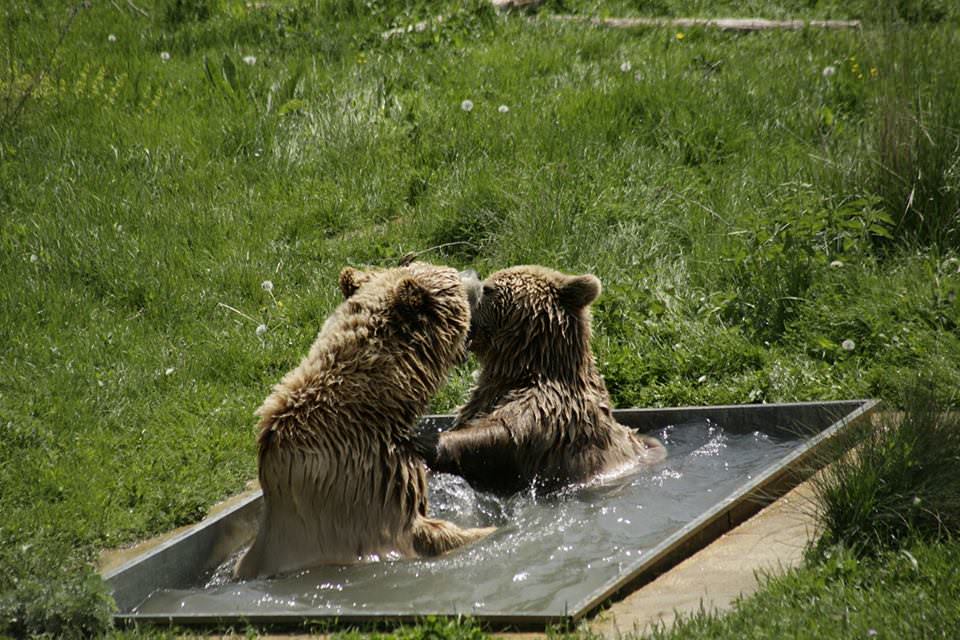 The bears slowly approached each other. Hope kept her distance, but Tomi came closer to sniff her. Then, she did the same. Right after that, they’re seen kissing! Then, this happens! 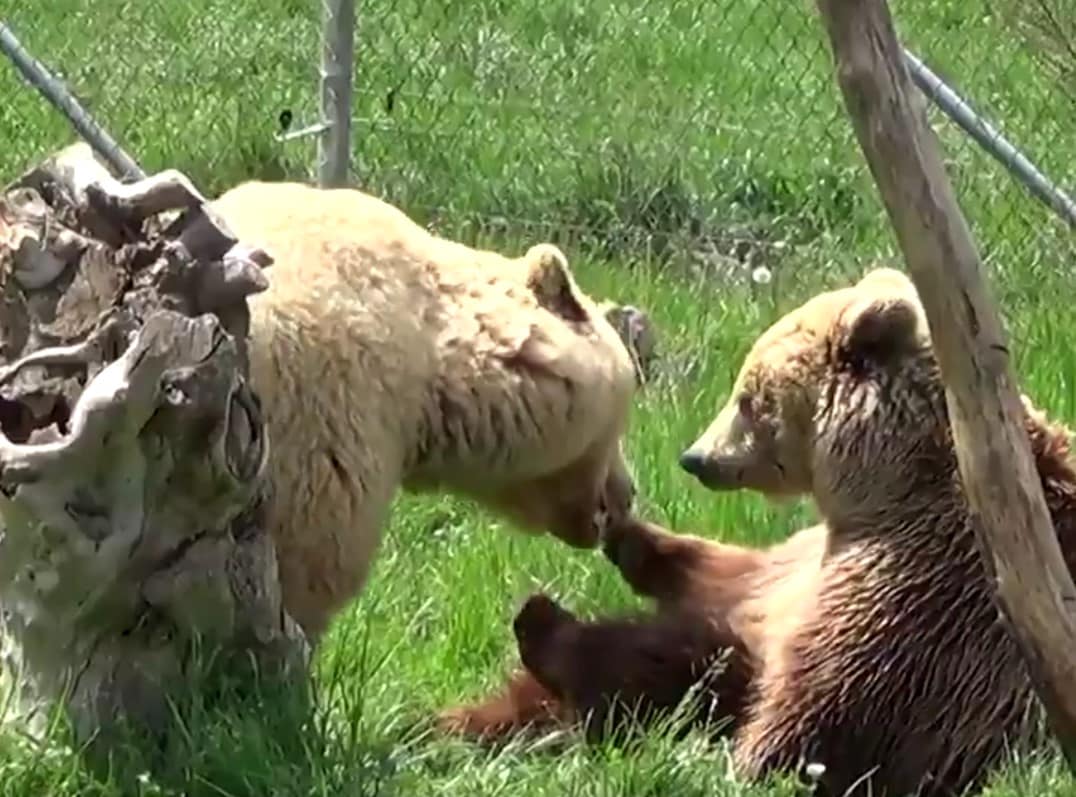 ‘And it was clear that they liked each other from the very first moment,’ concluded the rescue group in their photos. Who would have predicted the successful first date? 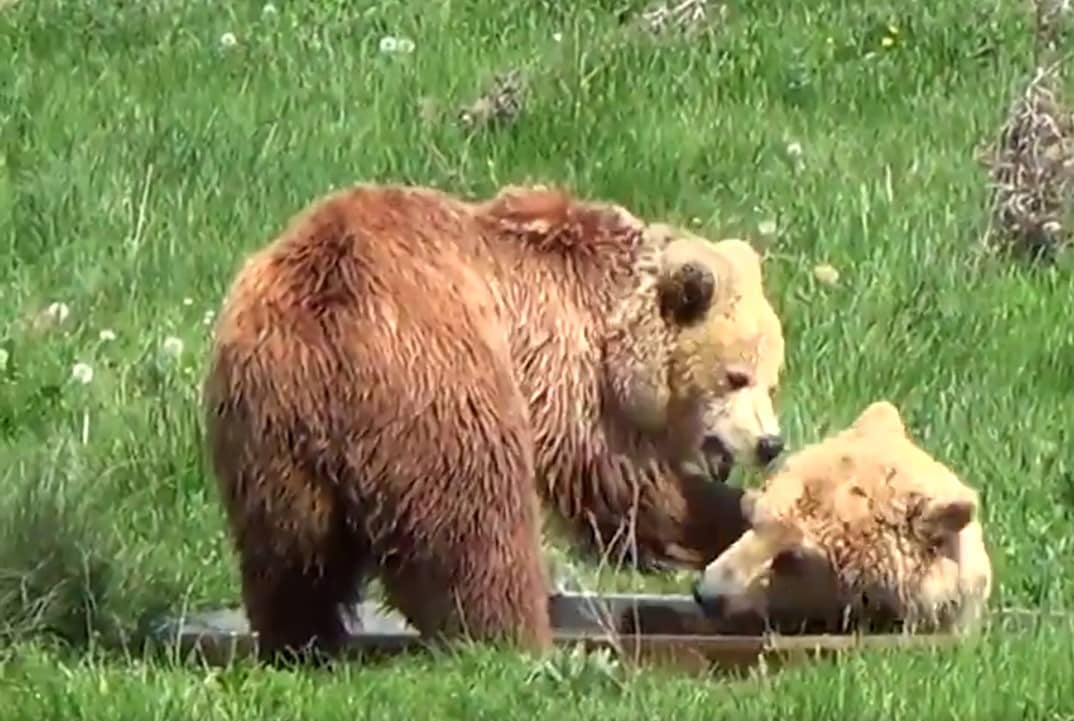 ‘We can happily report that they are inseparable,’ wrote Four Paws on Facebook. They even share the pool, and we can definitely say that the former saddest bears are now the happiest bears in the world! 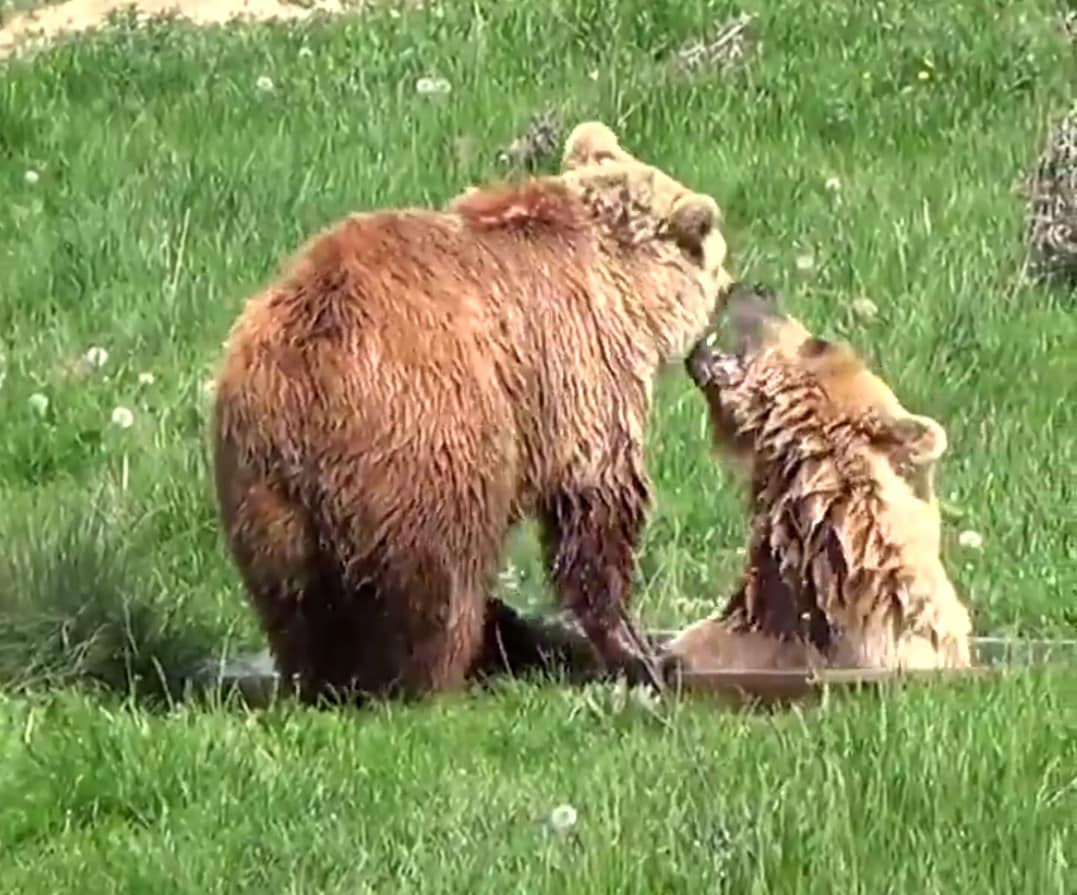 Soon enough, these two bears acted as if they were just a couple of old friends. After their first date, Toni and hope are now inseparable. The last update on them was posted by the rescue group on Twitter… 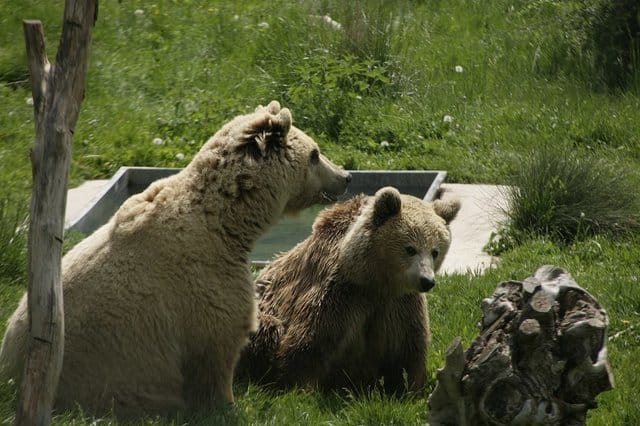 On their Twitter account, Four Paws wrote: ‘Whether Tomi & Hope are swimming, sunbathing or playing, they hardly ever leave each other’s side.’ And if this isn’t part of a fairytale, wait until you hear about this! 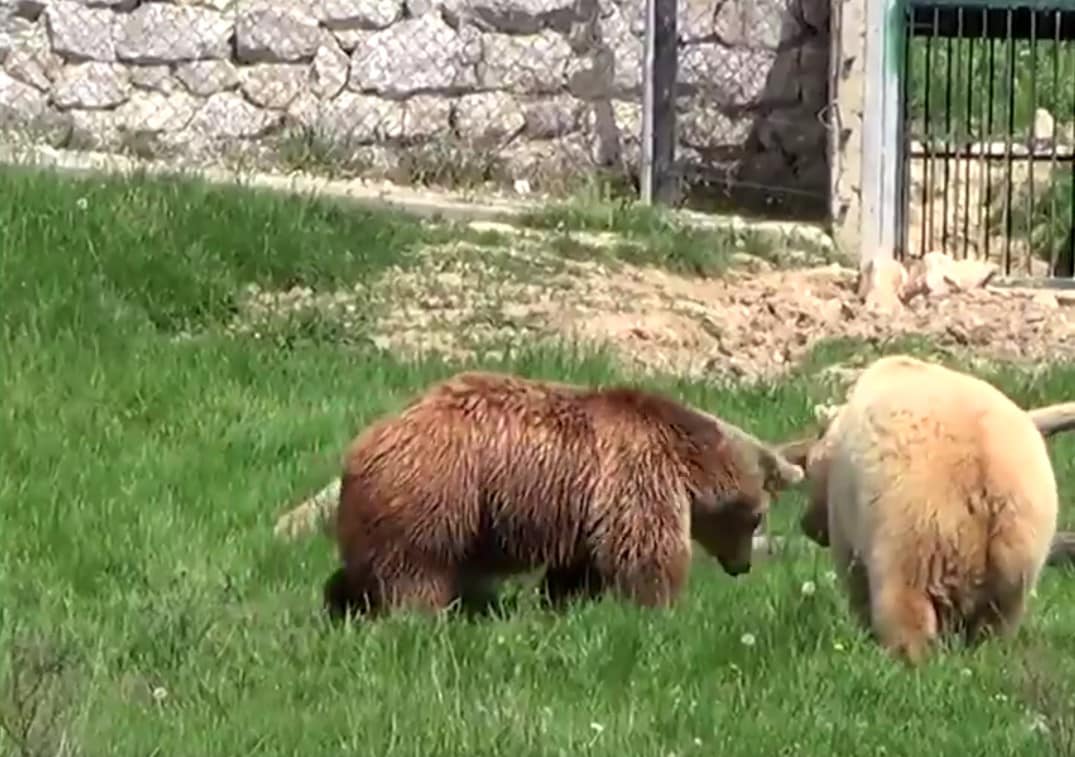 ‘As nights are warm enough they can sleep outside under the stars already – obviously lying close together,’ added the rescue group. This is the best life for a bear: a home of their own, someone by their side and free food! 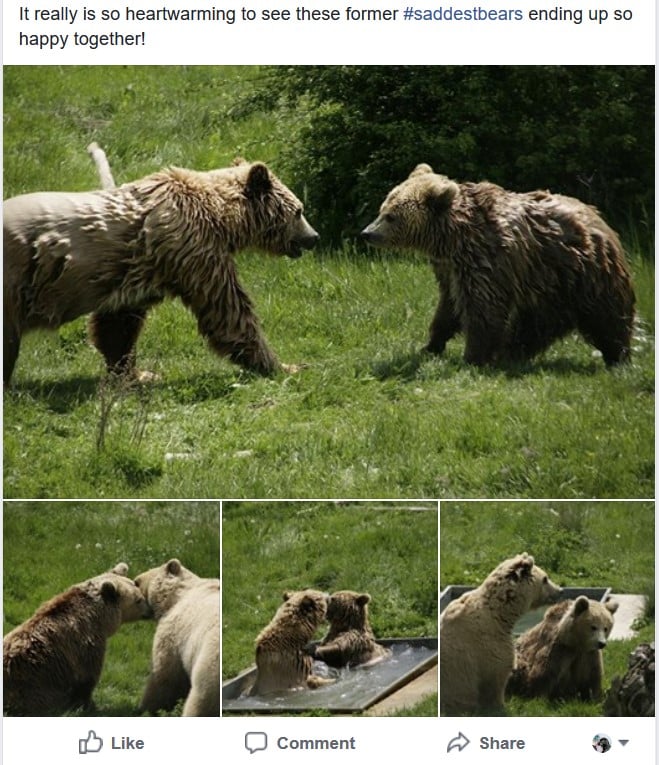 Seeing how happy and loving they are, it’s difficult to think that these bears were living in cages a while ago. Four Paws concluded that ‘Tomi and Hope are not alone anymore.’ And they’re not the only happy couple either! 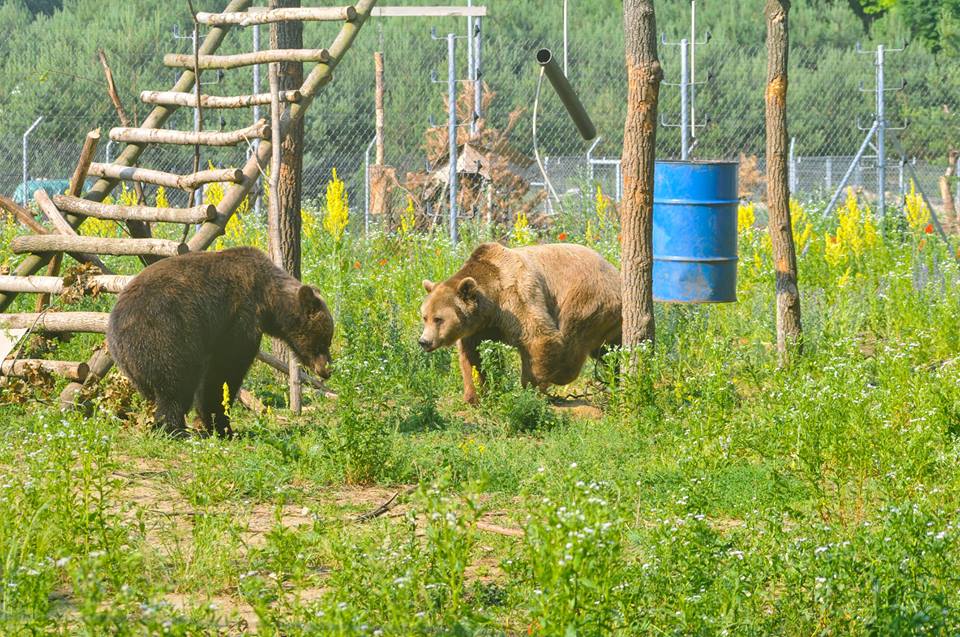 At the bear sanctuary Domazhyr, Tyson and Mashutka who were rescued last year from cages now live in their natural habitat, loving each other’s company. Mashutka immediately left the bear house to greet Tyson. 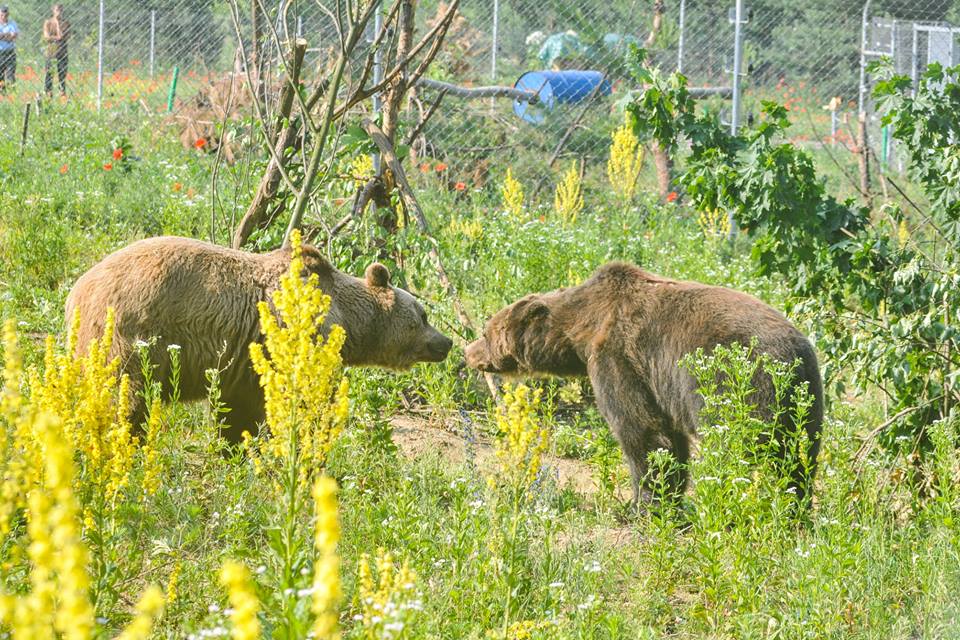 Mashutka’s greet was more like a smooch, but we think that Tyson was okay with it, since he immediately relaxed and chilled on the grass with Mashutka looking at him from the bush.

After so much suffering, these bears can finally get a wonderful life. Looking at the great time they’re having, we hope their sad past turned into a dim memory.