A Secret Found Buried Beneath A Hole In His Driveway 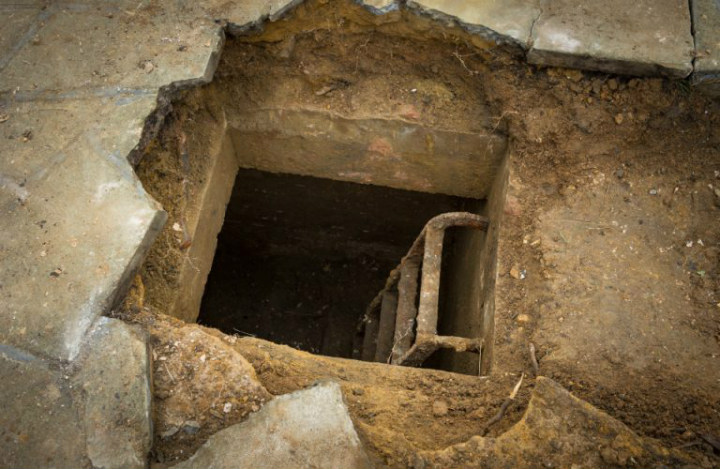 Simon Marks was a new home owner when he discovered a surprising secret buried on his land. It started off as a normal day for the British native. Backing out of his driveway his tire became stuck in a hole. Thinking nothing of it, he continued on. What he didn’t know at the time is that he would uncover a piece of history and become an internet sensation. Everyone has their 15 minutes of fame, it is said, but Marks made the most of that time by revealing a past that many of his generation knew little about. His find, as surprising as it is, was also a way to remember the history of where he lived, even if what he found was a bit unnerving at first.

As is the case with many a story of this type, Simon Marks was an ordinary man, living a life like anyone else in his small town of Luton in Bedfordshire, England. Working as a computer tech, supporting clients with their computer problems, he had worked his way to reaching his dream of owning a home. Little did he know that dream would lead to bigger things.

Just Below the Surface 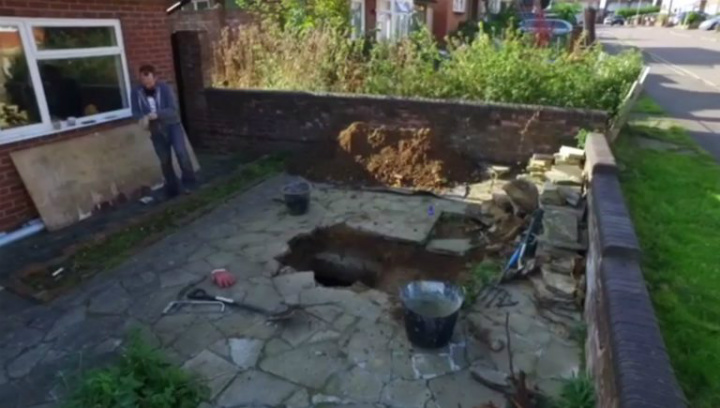 In October, 2016, Marks did what he did nearly daily; backed away from his home to head out to see friends or go to work. Each time he had backed out, he had loosed the stone that covered an opening that would lead to an amazing discovery. This day, though, was the day that the car finally got stuck, making the issue clear. Something had to be done. 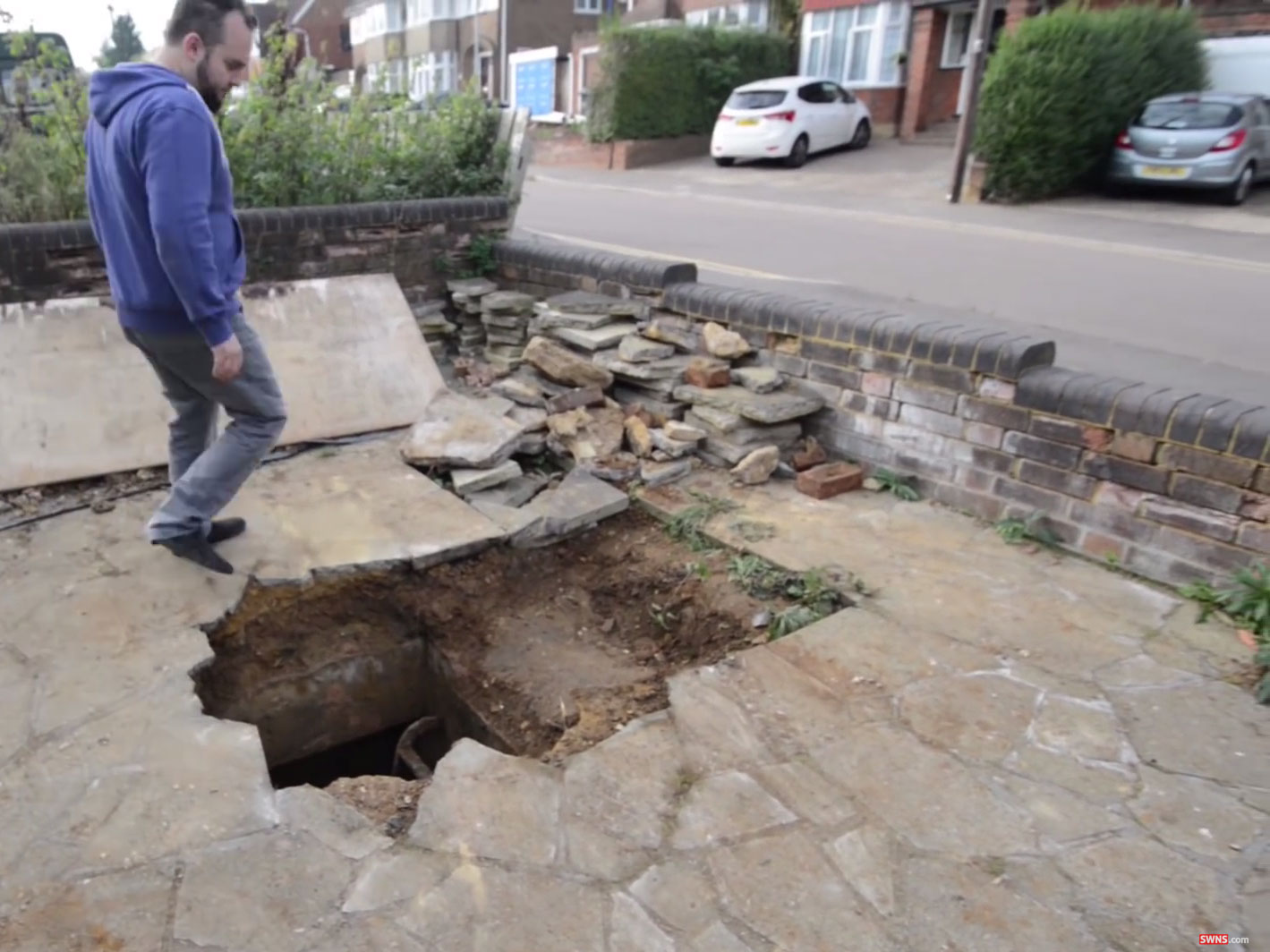 Initially it seemed as if the driveway would be an easy fix. A patch job at best, and a bit of repair at worst. While he was away, he thought more and more about what the problem could be, and thought that it was likely a loose stone or a rut in the pavement. Something easy enough to fix. What he found upon closer inspection led him down a path he could not have expected. 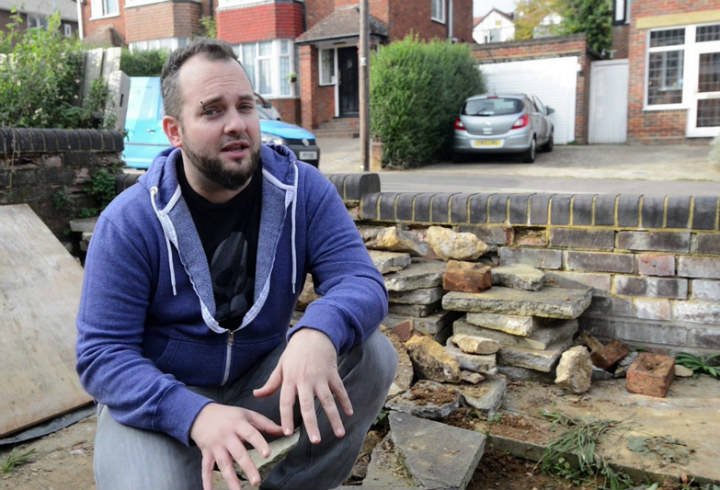 Once he returned home from his weekend away, he spent a little time looking at the troubling section of the driveway. It seemed that the pavement was just of a low quality build. Possibly due to a garden being filled incorrectly. The cause was of no concern as they would be an easy fix. Unfortunately, or fortunately, it turned out that the issue was much larger than he could have ever imagined.

A New Home with a Hidden Addition 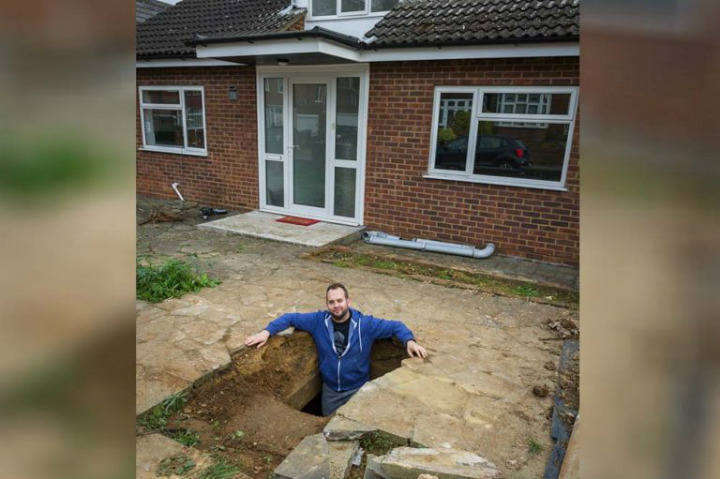 Once Marks was able to dig deeper into the issue, he found that the problem wasn’t poor construction, but an actual hold. While Simon was a handy guy himself, he realized that the hole was more than he could handled alone. He decided to first call his father, Gerald, to take a look and see what should be done. 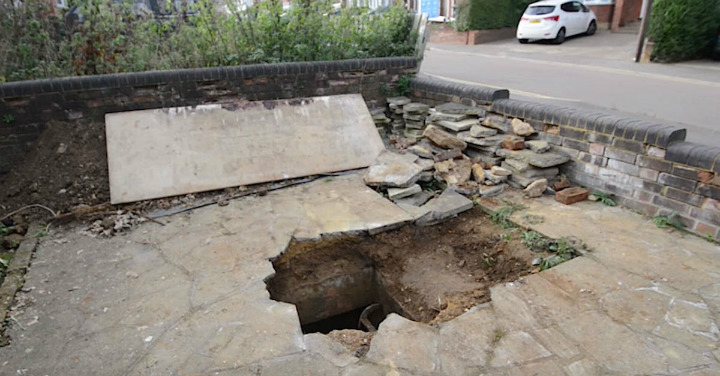 Simon’s biggest fear was that this was only the beginning of a hole. That this was something more like a sinkhole crossed him mind more than once. He feared for his newly purchased home and hoped his father would be able to settle his doubts. “I was just terrified the whole house was going to vanish,” Marks told reporters after everything was done. Fortunately, his father helped him realize that that was not the issue they faced, it was something much different. 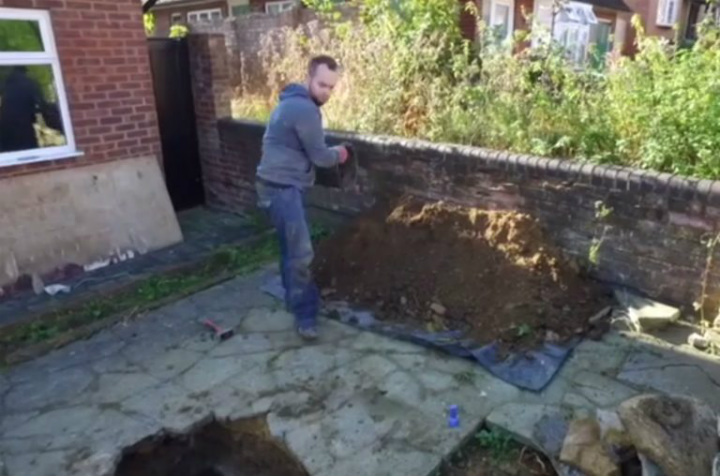 Once Simon and his father, Gerald, started digging, they found something they didn’t expect. This wasn’t a sinkhole in the making, but it wasn’t a poorly filled garden either. They still couldn’t figure out what it was, but it seemed to be something man-made. It looked like someone was hiding something, but what it was did not become clear until later. While the two continued to dig, they tried to figure out what could be hidden here for so long, but they were at a loss, at least for the time being. 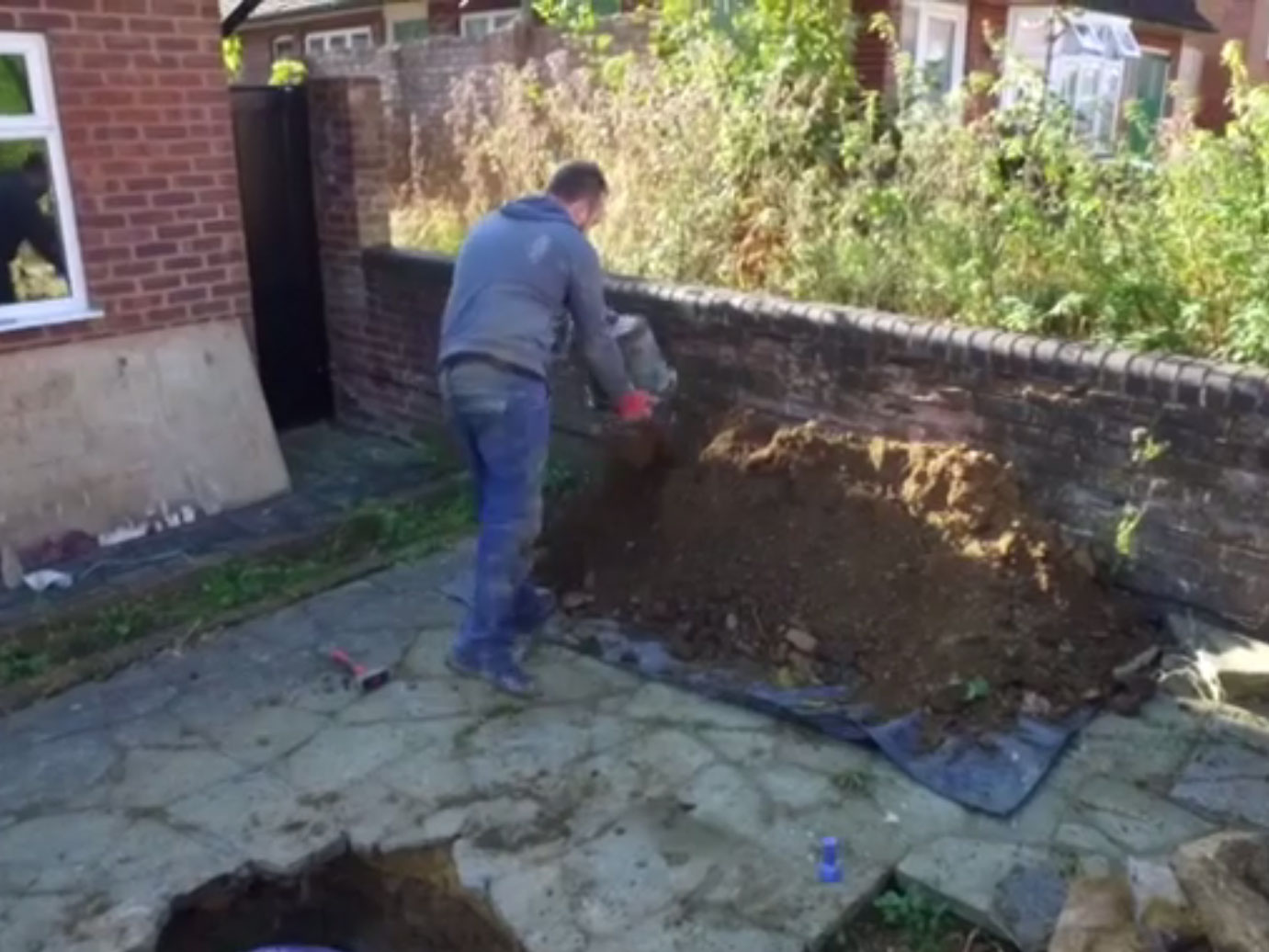 With just the two working on the hole, the process was going extremely slow. Fortunately, they now understood that they were working on something that was not going to impact Simon’s new home. Instead, it was a slow dig into something that had been hidden for decades at the least. With only two pairs of hands, though, the truth would take some time to discover. The wait would be worth it.

A Reason to Continue

As the hole was opening, the two started to get frustrated and feel as if they were running into a dead end. They knew that the integrity of the home was safe, but it almost seemed as if the quest to discover what was buried was not worth the effort. A simple repair would let Simon use his driveway again and stop the constant work. Then, they discovered something that pointed to an important time in history. An important artifact for mankind and to the local town. They were starting to get an idea of what they stumbled upon, but there were more questions than answers left.

A Ladder of Consequence 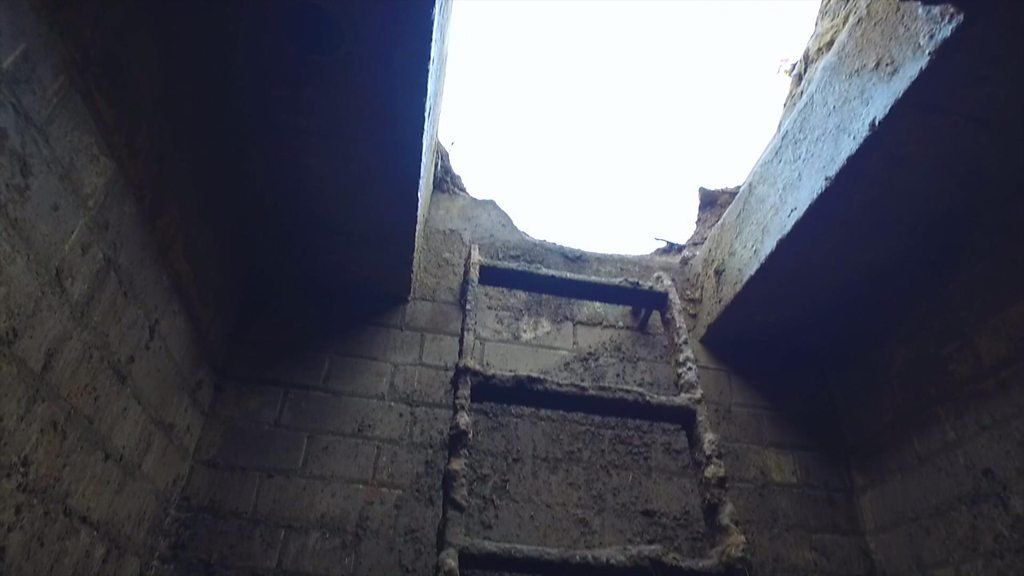 Once the initial rubble was cleared, the thing that drove them to continue to dig was the discovery of a ladder that was mounted to a… wall? Something was down there, and the only way to find out was to continue to follow the hole and see what opened below. 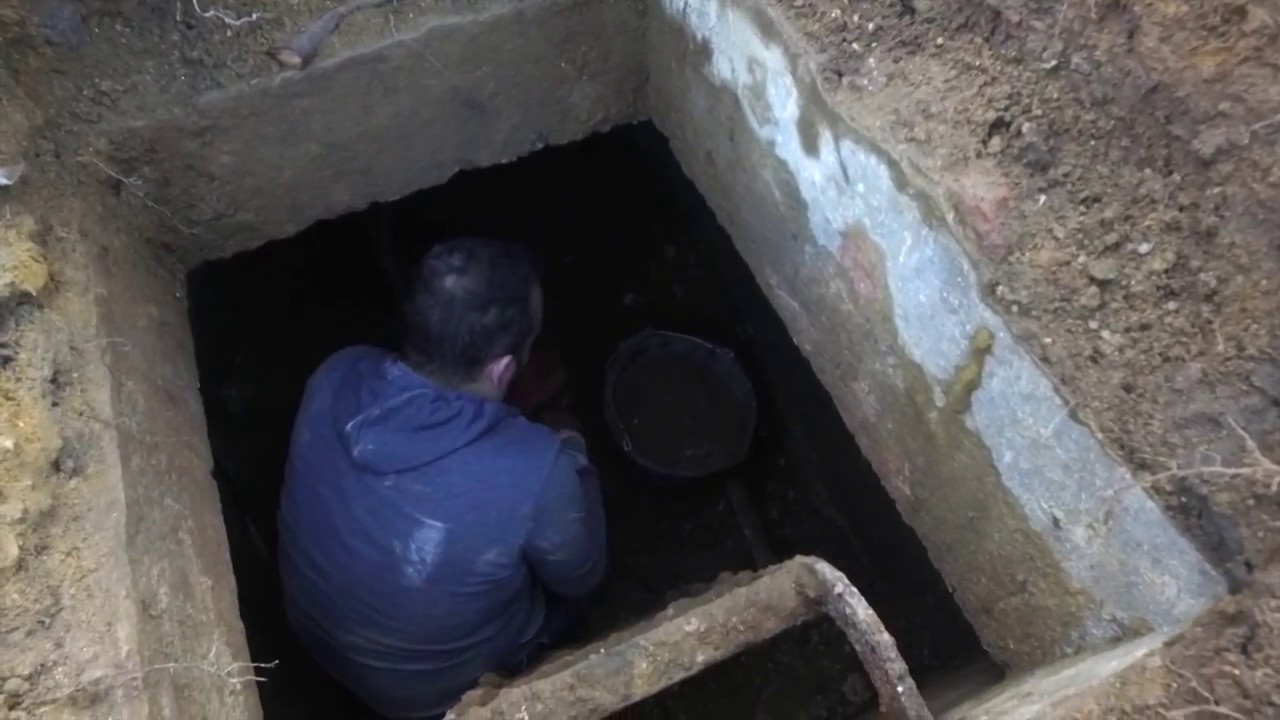 Once the hole was large enough to climb down, the two entered the space with smartphone flashlights and selfie sticks in hand. The ladder led into total darkness and the only way to brave the unknown was together and with light. Hope that the initial digging was all that would need to be completed was fruitless. Once they entered the hole they saw that it was something larger. The ladder led to a hallway or room of some sort, but more dirt prevented them from seeing what else was hidden.

A Shot in the Arm 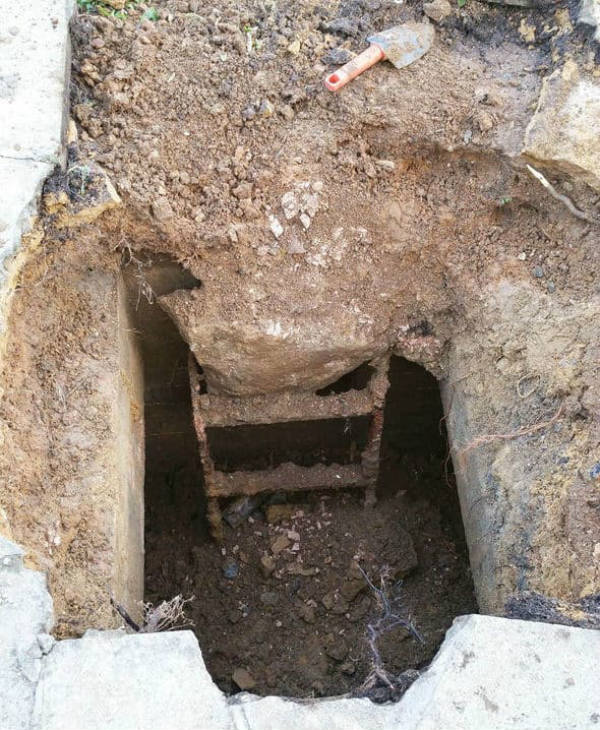 The excitement of the unknown was just the shot of adrenaline that Marks needed. The digging started again, but now with a renewed zeal. The excitement of uncovering a historical relic was enough to keep even the most exhausted of arms digging. The further they dug, the more the hole opened. This is where things started to reveal themselves. A little research about the area, when they weren’t digging, led Marks and his father to get an idea of what they had stumbled upon.

The House on the Hole 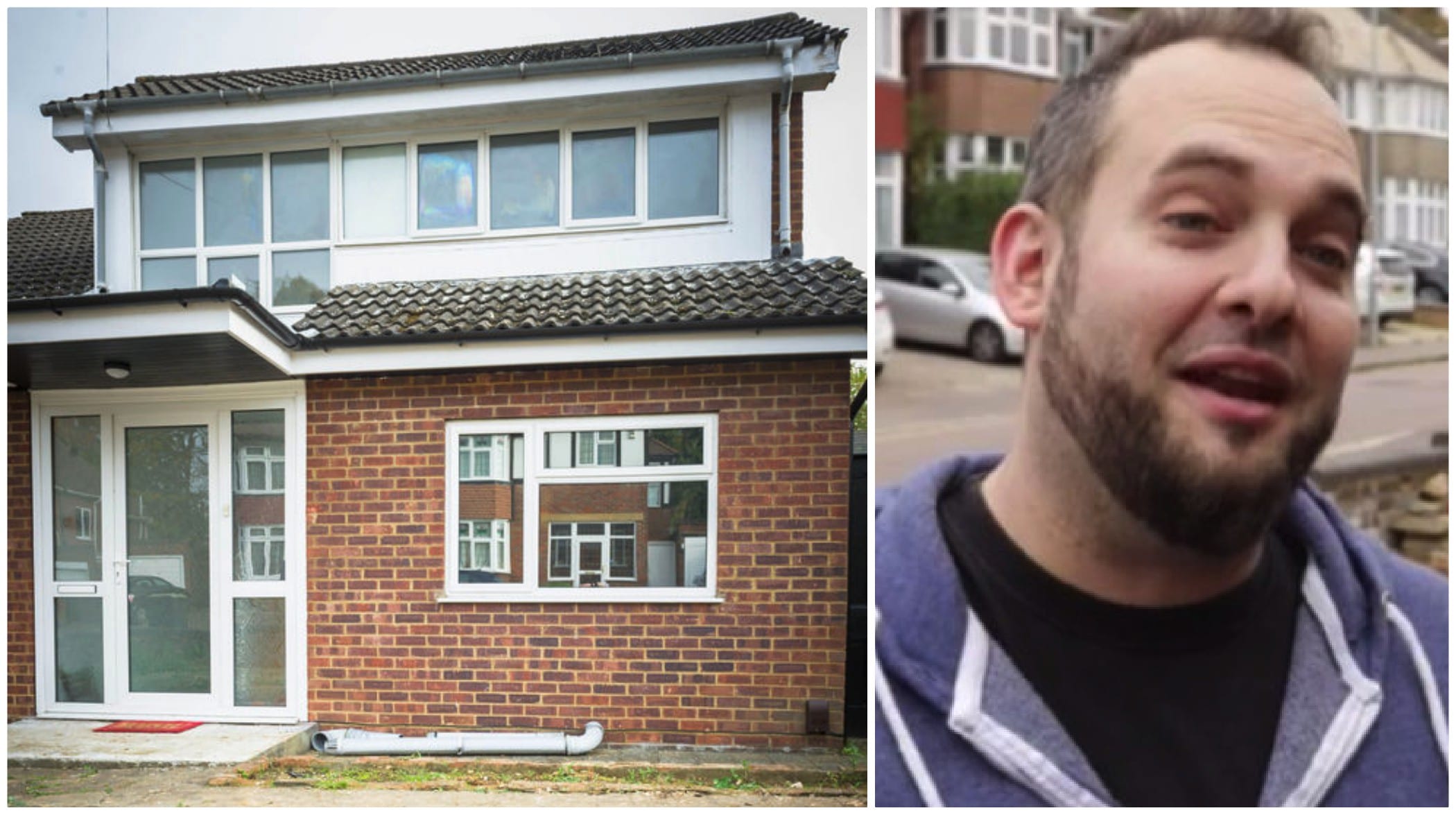 Marks looked back at the original building of the home and the land it was built upon. The original owners built the house in 1970 on vacant land. When Simon purchased, they elderly couple told him nothing of a hole or what could be below it. It is possible they knew nothing of the hole, but it pointed Marks to look before the 70’s to discover more about the history of the area. 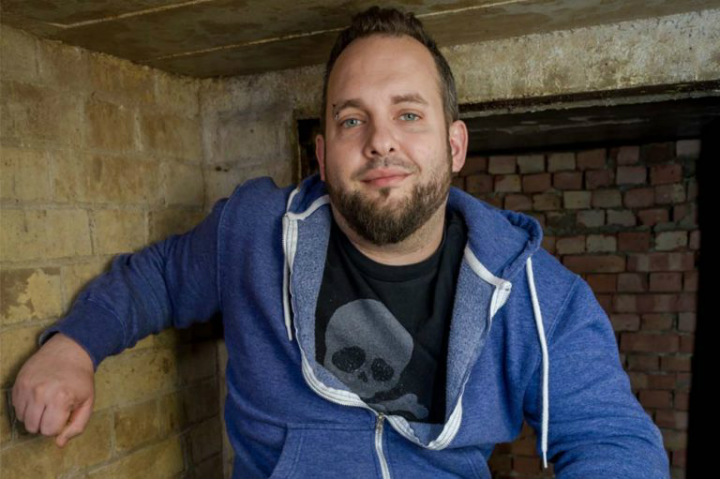 Upon further inspection, Marks and his father started to reinforce their belief that this was a hole that led to a room, or rooms, used in a different time, for a terrifying reason. They confirmed their thoughts by finding more spots like this throughout the UK that had been used for the same reason. If the hole was built at the same time, the answer was clear. That is, the answer was clear if you paid attention in history class. 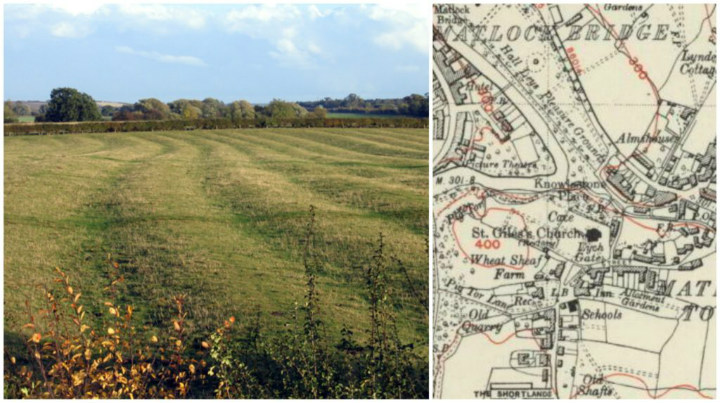 Gerald and his son continued their research to confirm their suspicions. This was open land before Marks’ house was built. Nothing was marked on the plans for the land, but further investigation showed that this was a strategic area near another neighborhood. The most important clue that put everything in place was the time in which the hole was built. Somewhere around 1937 to 1938. A name continued to appear in their research. Sir John Anderson.

Preparation for the German Invasion 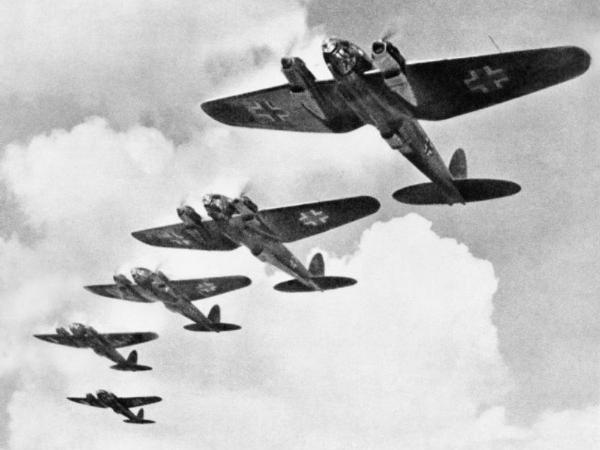 Those outside of the UK have little understanding of just what happened in Britain during WWII. Images try to show the devastation and fear that was brought upon the country, but it is difficult to imagine what it is like to live under the constant fear of the next air raid horn. Sir John Anderson was the man responsible for preparing the country for war against Nazi Germany, which meant he needed to protect the citizens of Britain from the bombings that were to come. His plan proved to be a testament to his ingenuity.

Sir John Anderson and the Bombs 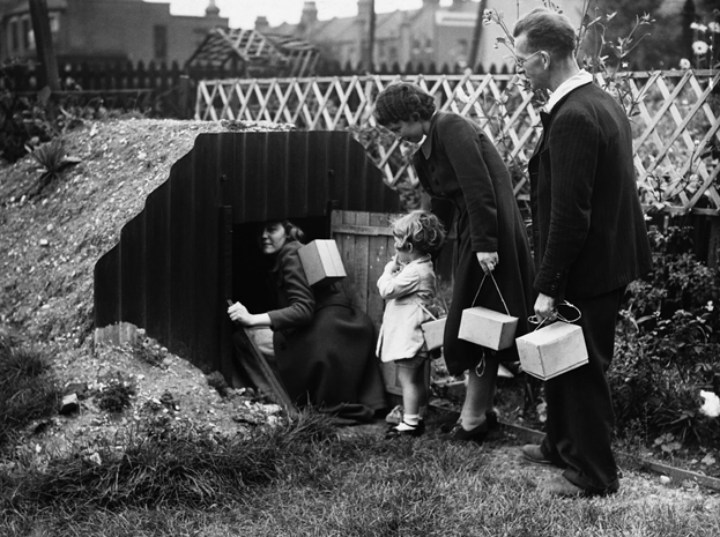 For the casual history fan, a bomb shelter is generally something made of concrete and buried deep beneath the ground. Sir Anderson devised a different structure made of a flexible metal that could be buried in the backyards of British homes as a structure that would protect the people under attack more effectively. Interestingly, with over 2 million of these shelters built through the country, the Marks hole did not fit the bill. 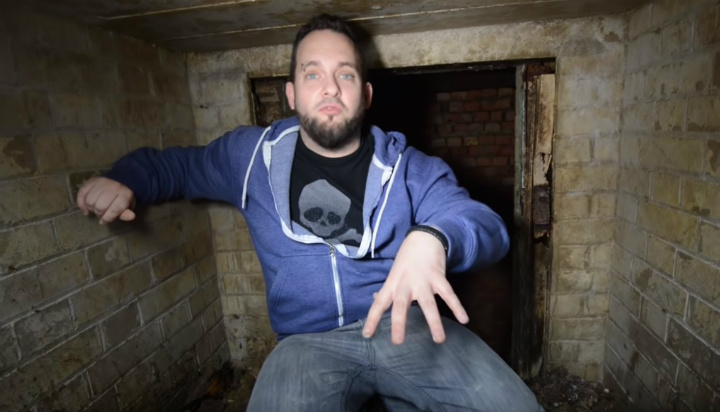 Even without knowing the population of the country at the start of the war, it should be clear that 2 million shelters would not protect every citizen. The hole the Marks’s found, was likely built due to bombing near Luton that panicked the locals into building their own shelters. These individuals learned that the Germans were bombing the smaller cities which led them to create a community shelter that would house more than just one family during a bombing raid.

A Unique Take on Anderson’s Design 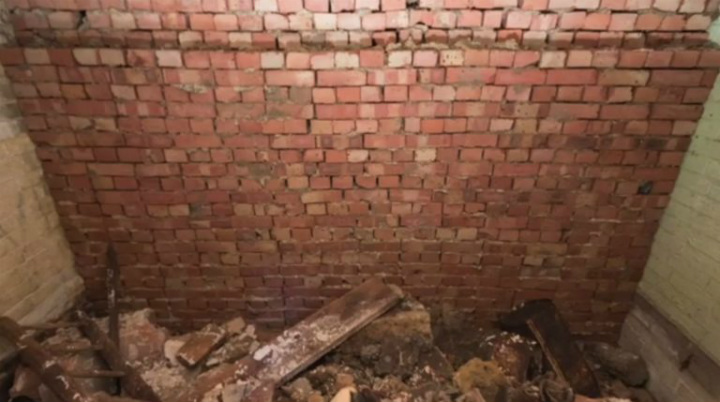 While Sir Anderson’s design was a solid one that helped protect many citizens, it did not reach everyone. Thus, the individuals living near Marks’ current home created a shelter in a more traditional design that would protect them from the bombings brought about by the Germans. The build was almost entirely made of brick and looked more like catacombs that you would see in most movies, but it served the same purpose. The problem was that the construction and location was lost to history. 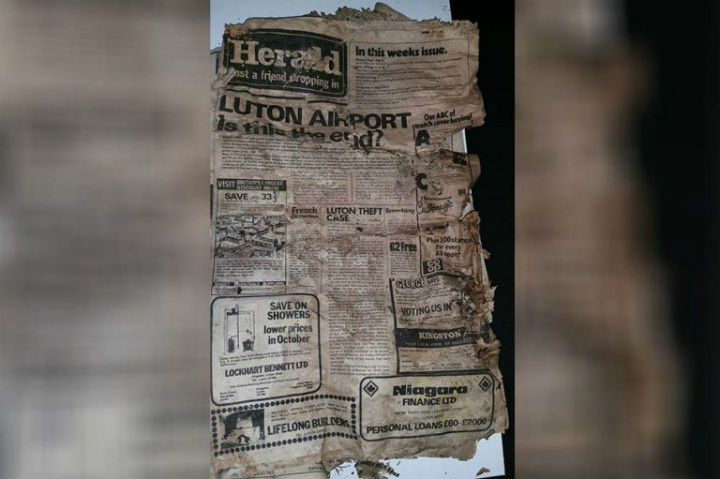 While they were fairly sure they had found a WWII era bomb shelter, the Marks’ wanted more proof. As they continued to dig and clear the rubble in the different rooms, they found relics that pointed to the time period and confirmed their theory. One was a clipping from the Herald newspaper that dated it to the time of the bombings. The headline read “LUTON AIRPORT Is this the end??” which confirmed the fear that the citizens must have held about the local airport being bombed soon.

To Point a Fine Point on it 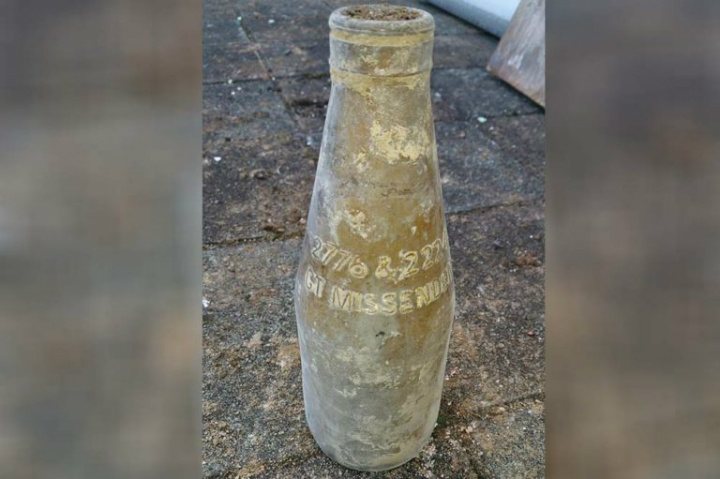 In addition to the newspaper, other relics of the past were found. Food, water, and containers were stocked in the bunker as the locals would sometimes be stuck in the shelter for days. Through their inspection, they found a number of items and learned that the bunker was built with concrete and reinforced with brick and mortar, which gave the underground bunker more structural integrity. 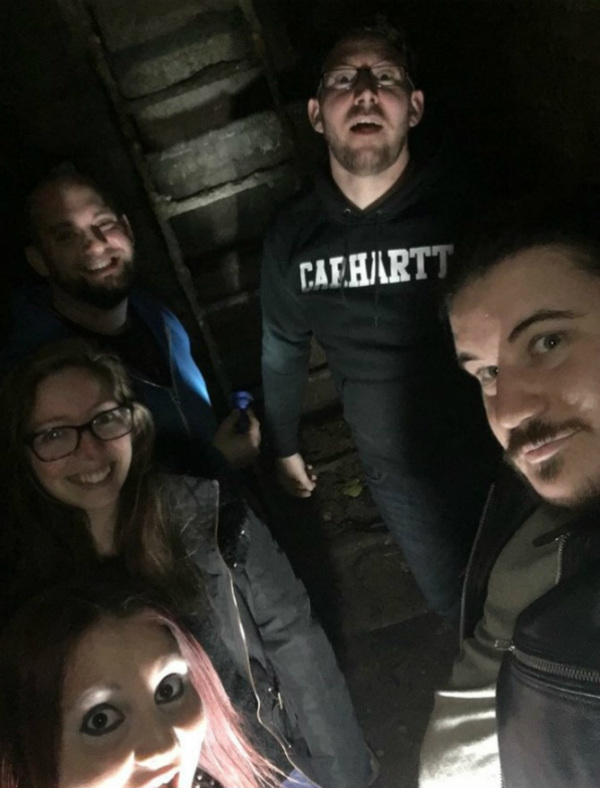 Now that the mystery was solved, you would think the story ended there. It didn’t though. The Marks’ continue to clear and restore the area to ensure that it can be seen for generations to come. Their goal is to preserve it as part of the countries history and a place for students and those interested in the past to visit. This seems to have sparked inspiration throughout the country as others have unearthed and restored Anderson and non-Anderson builds throughout the country. 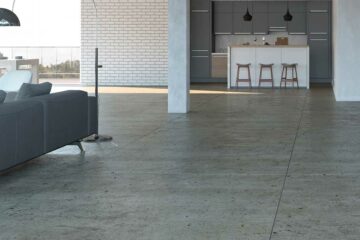 6 Reasons Why You Need A Concrete Floor